MP: 11 dead as SUV rams into empty bus in Betul 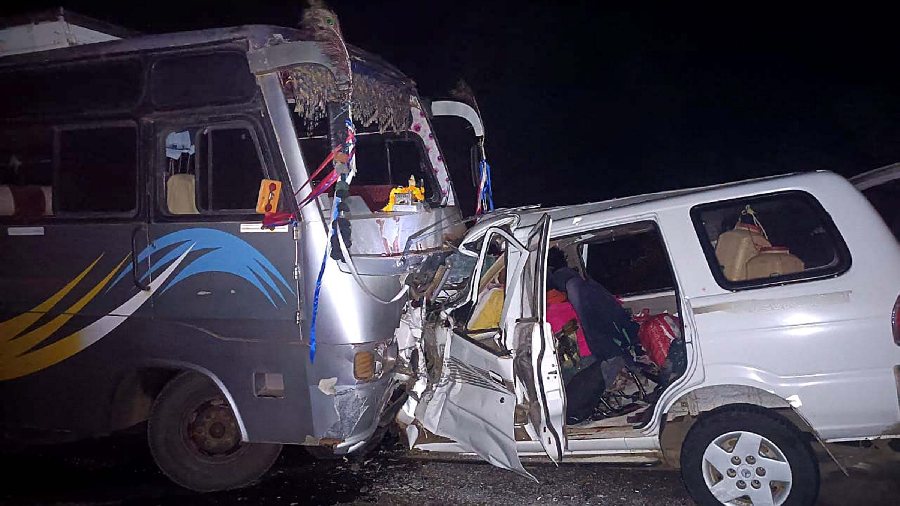 Eleven persons, including two children, were killed after the sports utility vehicle (SUV) they were travelling in collided with an empty bus at Jhallar in Betul district of Madhya Pradesh in the wee hours of Friday, police said.

"Six men, three women, a five-year-old girl and a one-and-a-half-year-old boy died on the spot in the accident," he said.

PM Modi announced an ex-gratia of Rs two lakh each to the kin of the deceased and Rs 50,000 to the injured persons from the Prime Minister National Relief Fund (PMNRF), the PMO said in a tweet.

Jhallar police station in-charge Deepak Parashar said all 11 occupants of the SUV died in the accident.

According to police, the deceased were labourers, who were returning home here from Amravati in neighbouring Maharashtra.

The severity of the accident was such that the front portion of the SUV was completely damaged and got stuck to the bus. The bodies of some of the victims had to be extricated from the mangled remains of the SUV with the help of gas cutters, Thakur said.

The bodies were later sent for post-mortem.

Primary investigation suggests that the accident took place after the driver of the SUV lost control over the vehicle due to sleep, police said.

The driver of the bus was arrested and further investigation is underway, they said.

Betul collector Amanbir Singh Bains said he has asked the doctors to expedite the autopsy process and send the bodies of the victims to their native places.

"The district administration has also initiated the process to provide financial assistance to the kin of the victims in the accident," he said.