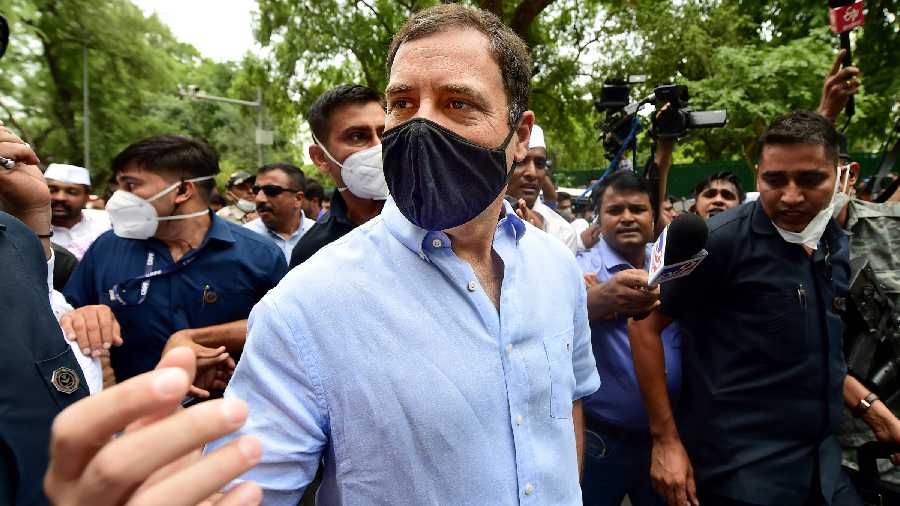 Congress leader Rahul Gandhi appeared before the ED on Wednesday for the third consecutive day of questioning in the National Herald money laundering case, with the agency seeking answers on decisions taken with regard to the media organisation and its owner Young Indian.

Gandhi (51) arrived at the ED headquarters on APJ Abdul Kalam Road in central Delhi around 11.35 am with his "Z+" category CRPF security escort.

He was accompanied by his sister and Congress general secretary Priyanka Gandhi Vadra as his convoy whizzed past police barricades thronged by media persons and party supporters.

The questioning began at 12 noon. He was grilled for about three hours after which he left for an hour long break, possibly for lunch.

He rejoined the probe around 4 pm.

A huge contingent of police and paramilitary personnel has been deployed around the federal agency's office, and prohibitory orders under section 144 of the Code of Criminal Procedure (CrPC) is in force.

Priyanka Gandhi left soon after dropping her brother off at the Pravartan Bhawan office of the Enforcement Directorate (ED) on Vidyut Lane which flanks APJ Abdul Kalam Road.

A number of protesting Congress leaders and supporters were rounded up by the police and bundled into DTC and Delhi Police buses at multiple locations between the ED office and the 24 Akbar Road headquarters of the party.

Chhattisgarh Chief Minister Bhupesh Baghel told reporters outside the Congress headquarters that the government was "murdering democracy" as party workers and office bearers were not being allowed to enter the AICC premises by the police.

Rahul Gandhi has clocked over 24 hours in multiple question and answer sessions over the last two days at the ED office. He left at 11:30 pm on Tuesday after being questioned for over 11 hours on day two.

Officials said Gandhi's questioning could not be completed on Tuesday, and hence, he was asked to continue the recording of his statement on Wednesday.

About 15-16 questions about the incorporation of the Young Indian company, the operations of the National Herald newspaper, the loan given by the Congress to the Associated Journals Limited (AJL) and the funds transfer within the news media establishment have been put to Gandhi during the questioning held till now, sources indicated.

They said the role of Gandhi and his detailed statement in the case is vital as he is a "major shareholder" in Young Indian (YI) and "important person" in the AJL and National Herald affairs.

It is understood that the agency has put across questions to him about the assets owned by AJL. With the agency attaching a building worth over Rs 16 crore in Mumbai in 2020, proceedings in the case have converted to criminal as compared to the civil processes being carried out under the Income Tax Act.

Gandhi is also understood to have been asked about a loan of Rs 1 crore taken by YI from a Kolkata-based company in February 2011 and the rationale behind it.

The questions put to Gandhi, the sources indicated, start from the year 2011 when YI was incorporated. It has also been learnt that the questions cover the changes that took place in the shareholding pattern of the company after that, the procedures followed, and the salaries and VRS given to journalists working in the organisation among other issues.

The Congress has denied any wrongdoing in the case, saying YI is a non-profit company established under section 25 of the Companies Act.

The party said AJL, which was established in 1937, faced huge debts and the Congress, from 2002 to 2011, gave Rs 90 crore to the National Herald newspaper, out of which Rs 66 crore was used to pay the salaries/VRS of the journalists and staffers who worked there.

The rest of the money was given to the government as pending lease amount for the assets held by AJL, its electricity and building expenses and house tax, Congress spokesperson Randeep Surjewala said.

Congress leaders Mallikarjun Kharge and Pawan Bansal were questioned in this case recently, and Kharge said he gave "evidence" to the agency during his questioning.

The probe pertains to alleged financial irregularities in the Congress-promoted Young Indian Private Limited, which owns the National Herald newspaper.

The newspaper is published by the AJL and owned by Young Indian Private Limited.

Rahul Gandhi's mother and Congress president Sonia Gandhi, who is currently admitted to a hospital here due to Covid-related issues, has also been summoned by the agency for questioning in the case on June 23.

The ED recently registered a fresh case under the criminal provisions of the PMLA after a trial court here took cognisance of an Income-Tax department probe against Young Indian on the basis of a private criminal complaint filed by BJP MP Subramanian Swamy in 2013.

Sonia and Rahul Gandhi are among the promoters and shareholders of Young Indian.

Swamy had accused Sonia and Rahul Gandhi and others of conspiring to cheat and misappropriate funds, with YI paying only Rs 50 lakh to obtain the right to recover Rs 90.25 crore that AJL owed to the Congress.

In February last year, the Delhi High Court issued a notice to the Gandhis for their response on Swamy's plea, seeking to lead evidence in the matter before the trial court.

The Gandhis had secured separate bails from the court in 2015 after they furnished personal bonds of Rs 50,000 and one surety.

They, however, had contended in the high court that Swamy's plea was "misconceived and premature".

The other accused in the case filed by Swamy are the Gandhis' close aides Suman Dubey and technocrat Sam Pitroda. They have denied any wrongdoing.