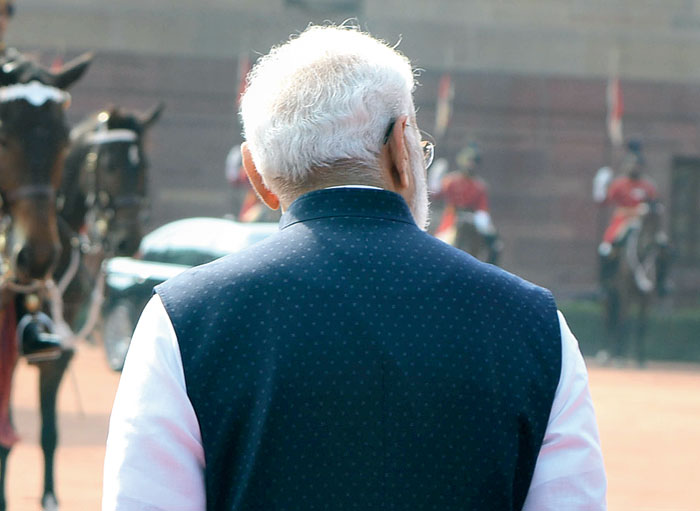 The Narendra Modi government’s bluster on the state of the Indian economy was bottled on Friday after the National Statistical Office (NSO) came out with data that showed growth in the second quarter had sunk to an over six-year low of 4.5 per cent — the slowest expansion in 26 quarters.

The sharp slowdown was triggered by a contraction in the manufacturing sector and a deceleration in agriculture, services and construction as well as in utilities, including electricity generation.

The NSO number was worse than the median estimate of 4.7 per cent that a Reuters poll of economists had thrown up ahead of the announcement.

It was the slowest growth since the January-March quarter of 2012-13 when it had come in at 4.3 per cent.

The announcement marked the sixth straight quarter that GDP growth had tumbled, sending economists and researchers scrambling to reassess forecasts for the full year.

At its monetary policy review on October 4, the Reserve Bank of India had cut its full-year growth forecast to 6.1 per cent. But that now looks shaky with several analysts now starting to believe that it will be a lot worse.

“Our full-year growth forecast is revised down from 5.7 per cent earlier to about 4.5 per cent,” said Nikhil Gupta, chief economist at Motilal Oswal Financial Services Ltd -– and he wasn’t the only Cassandra making grim prophecies.

If true, it will be the slowest yearly growth since the Modi government changed the base year for calculating national statistics to 2011-12. Official statistics show that the slowest growth rate was 5.5 per cent in 2012-13.

Finance minister Nirmala Sitharaman, who had mounted a robust defence of the Modi government’s handling of the economy in the Rajya Sabha only two days ago, will now come under increasing pressure to devise measures to jump-start the economy.

But before she does that, she will have to acknowledge that the slowdown isn’t the result of cyclical factors — a belief she has desperately clung to — and that the crisis will not blow over in the next couple of quarters.

Former Prime Minister Manmohan Singh said: “The GDP figures released today are as low as 4.5 per cent. This is clearly unacceptable. The aspiration of our country is to grow at 8-9 per cent.… Mere changes in economic policies will not help revive the economy.”

But Krishnamurthy Subramanian, the government’s chief economic adviser, remained unfazed by the blizzard of weak data. “We are saying again that the fundamentals of the Indian economy continue to be strong. The GDP is expected to pick up in the third quarter,” he added.

In the September quarter, private investment grew 5 per cent, up from 3.1 per cent in the previous quarter, while government spending rose 15.6 per cent from 8.8 per cent.

However, capital investment growth slipped to 1 per cent from 4 per cent, indicating that despite rate cuts firms are putting investment on hold.

The release of another dataset deepened the gloom. The combined outputs of eight core infrastructure industries contracted --- for the second month in a row --- by 5.8 per cent in October, the lowest in over a decade, indicating the severity of the slowdown.

As many as six of these eight core industries --- coal, crude oil, natural gas, cement, steel and electricity --- saw a contraction in output in October.

Also, the government found itself with no wiggle room to boost its own spending as figures released by the controller general of accounts (CGA) --- the government’s accountant --– showed that the country’s fiscal deficit had crossed the budget estimate for the full year. It stood at Rs 720,445 crore, 102.4 per cent of the full-year estimate.

Sitharaman had said during the Rajya Sabha debate that the government had no intention of buckling on its commitment to cap fiscal deficit at 3.3 per cent of the GDP –- a promise that increasingly looks like another straw in the wind.

“There is a strong case for a fiscal stimulus to prop up the economy,” said N.R. Bhanumurthy of the National Institute of Public Finance and Policy. “We need fiscal and not monetary measures. The slippage in the fiscal deficit should not worry the government as boosting growth should be its top priority.”

But the clamour for another rate cut is expected to grow to a crescendo with the RBI policymakers due to meet from December 3 to 5 in Mumbai. The RBI has already cut the policy rate five times since February, by 135 basis points to 5.15 per cent, and the pundits expect another one next week.

“A rate cut is almost certain next week and will be followed by another one in February,” Mark Williams, chief Asia economist at Capital Economics, said in a report.

But even that might not be enough to dispel the gloom that has darkened somewhat more with data released by the Centre for Monitoring Indian Economy, a respected independent research agency, saying the unemployment rate in October had risen to 8.5 per cent -– its highest level since August 2016.

“We are in a virtual free fall. This is the lowest GDP quarter in 6 years. But why is the BJP celebrating? Because their understanding of GDP (Godse Divisive Politics) suggests double-digit growth levels. All in the perspective,” chief Congress spokesperson Randeep Surjewala tweeted. 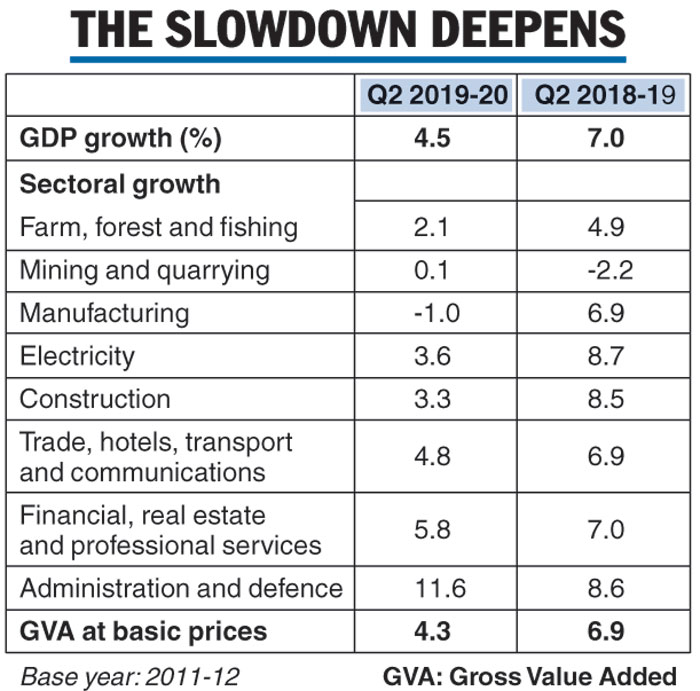