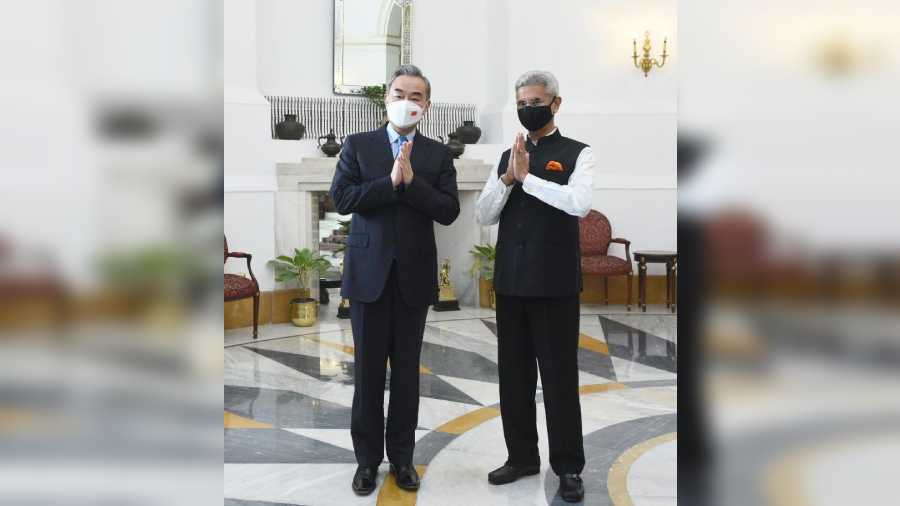 Wang, who holds the rank of state councillor, arrived in Delhi on Thursday evening from Kabul. There had been no official announcement or word on the visit.

Acknowledging the current visit of Chinese Foreign Minister Wang Yi to India for the first time, the Foreign Ministry here said on Friday that the details of his "working visit" will be released in due course.

As to the question to the working visit by State Councillor Wang Yi, we will release (the details) in due course, please stay tuned," Chinese Foreign Ministry spokesman Wang Wenbin said during a media briefing here, when asked about the Foreign Minister's visit to New Delhi.

The border issue is understood to have figured prominently in the meeting as both Wang and Doval have been serving as Special Representatives (SR) for boundary talks between the two countries.

Doval and Wang held a lengthy telephonic conversation in July 2020 and the talks focused on bringing down tension in eastern Ladakh.

Jaishankar and Wang have met in Moscow and Tajik capital Dushanbe on the sidelines of multilateral events in the last one-and-a-half years. But this is the first high-level visit between India and China after their ties came under severe strain following the border standoff in eastern Ladakh nearly two years ago.

Ahead of the visit, India criticised Wang over his remarks on Kashmir at a meeting of the Organisation of Islamic Cooperation (OIC) in Pakistan.

For China, it is learnt, the visit is more to do with the geopolitical turmoil in the wake of the Russian invasion of Ukraine than bilateral ties.

However, the Indian side is unlikely to shift focus from the eastern Ladakh row. It is expected to press for complete disengagement of troops from all the friction points in the region for resumption of normal bilateral ties.

India and China have been holding high-level military talks to resolve the face-off in the remaining friction points in eastern Ladakh. Both sides withdrew troops already from some of the friction points following the talks.

On March 11, India and China held the 15th round of high-level military dialogue to resolve the pending issues in the eastern Ladakh region. However, there was no forward movement in the talks which were aimed at resolving the remaining issues.

In September 2020, Jaishankar and Wang held extensive talks in Moscow on the sidelines of a conclave of the Shanghai Cooperation Organisation (SCO) during which they reached a five-point agreement to resolve the eastern Ladakh border row.

The pact included quick disengagement of troops, avoiding action that could escalate tensions, adherence to all agreements and protocols on border management and steps to restore peace along the LAC.

The two foreign ministers had held a bilateral meeting on the sidelines of another SCO meeting in Dushanbe in July last year with a focus on the border row. They again met in Dushanbe in September.

India has been consistently maintaining that peace and tranquillity along the Line of Actual Control (LAC) is key for the overall development of the bilateral ties.

Recently, Wang said some forces have always sought to stoke tensions between China and India, an apparent reference to the US.

The eastern Ladakh border standoff between the Indian and Chinese militaries erupted on May 5, 2020, following a violent clash in the Pangong lake areas.

Both sides gradually enhanced their deployment by rushing in tens of thousands of soldiers as well as heavy weaponry.

As a result of a series of military and diplomatic talks, the two sides completed the disengagement process last year in the north and south banks of the Pangong lake and in the Gogra area.

Each side currently has around 50,000 to 60,000 troops along the Line of Actual Control (LAC) in the sensitive sector.