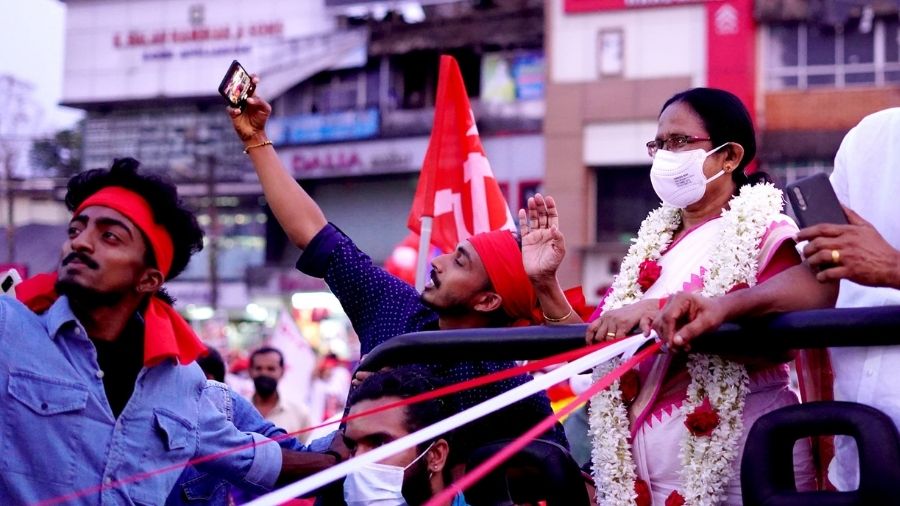 Amidst the heightened social media campaign to induct K K Shailaja into the new cabinet, the CPI(M) on Wednesday said the dropping of the popular health minister was a "political and organisational" decision of the party and there would not be any relook into it.

CPI(M) state acting secretary A Vijayaraghavan said the leadership had already explained the decision taken by the party in this regard.

Asked about the trending campaigns on the social media platforms to bring back 'Shailaja Teacher', as she is fondly being called, Vijayaraghavan said it did not come to his notice.

As far as the Communist party is concerned, politics and organisation were equally important and the present decision was in accordance with it, he said.

"The party has to take into account its political and organisational interests. As a ruling party, it has to give due consideration to protect the interest of the state also.

So, the party arrives at such decisions after serious contemplation," he told reporters here.

Pinarayi Vijayan was on Tuesday elected its Parliamentary Party Leader for a second term as Chief Minister but the omission of Shailaja from the new cabinet has sparked a debate.

Hailed as "rockstar health minister" by the global media for her able leadership, effective crisis management and mature intervention in arresting the first wave of Covid-19 in the state, Shailaja's non-inclusion raised many eyebrows cutting across party lines.

Meanwhile, the social media platforms are still abuzz with comments and campaigns to call back the health minister, who was regarded as the face of the state's fight against COVID-19.

People including politicians, writers and celebrities have expressed shock and despair on the Left government's decision to deny her a cabinet berth.

Many netizens are using hashtags such as #bringourteacherback, #BringBackShailajaTeacher to question the Left party's decision and request it to bring her back to the new ministry.

Aside from her reputed competence & efficiency, I always found her helpful, responsive & accessible as Health Minister, esp during the #Covid crisis. She will be missed.," Congress leader and former union minister Shashi Tharoor tweeted.

Sincerely wish there will be a rethink on the issue - still there is time," he said in a tweet.

Award winning actor Parvathy Thiruvoth described Shailaja as one of the most able leaders of the present time.

"@CMOKerala, We deserve better than this! #bringourteacherback One of the most able leaders of our times! A rarity, really! @shailajateacher led the state through the most difficult of medical emergencies," Parvathy tweeted.

However, Shailaja, said she was not disappointed at being denied a berth in the new cabinet.

Though critics and media alleged that Shailaja was sidelined, CPI(M) took the position that all ministers except the CM should be fresh faces in the new cabinet.

Soon after the historic poll victory, Chief Minister Pinarayi Vijayan had made it clear that there would be new faces in his second cabinet but he did not drop any hint that all existing ministers including Shailaja would be excluded.