Don’t impose your will on states, Opposition tells govt in RS 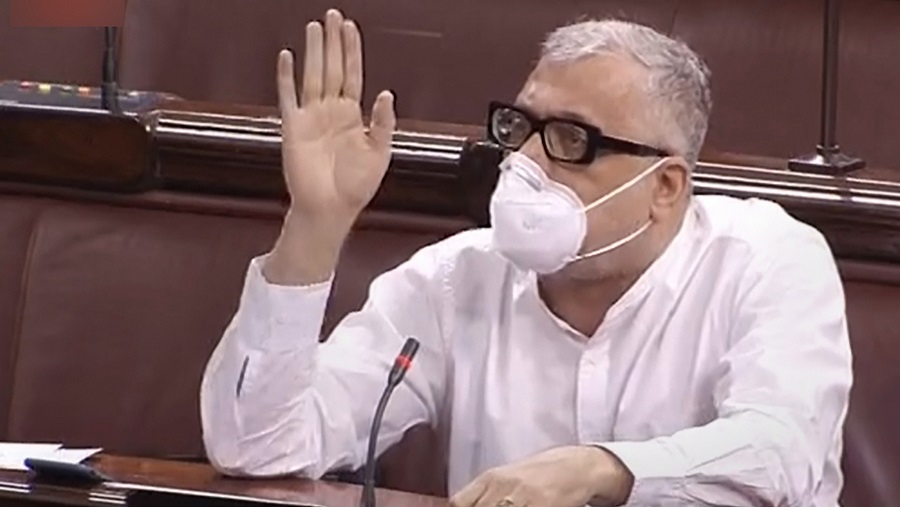 The Opposition attacked the government in the Rajya Sabha on Saturday, accusing it of crossing constitutional boundaries, interfering in the affairs of states, failing to control private hospitals during the coronavirus crisis, and being unable to protect migrant labourers and the poor.

Participating in a debate on The Epidemic Diseases (Amendment) Bill, 2020, Opposition leaders also charged the government with entering into the league of three democracies in the world that promote what they called “ordinance raj”.

Derek O'Brien (Trinamool Congress) accused the Centre of interfering in the functioning of states through the Bill.

The Bill provides for jail terms up to five years and hefty fines for attack on healthcare workers fighting the coronavirus outbreak or during any situation akin to the current pandemic.

"Remember states of Bengal, Punjab, Telangana, Andhra Pradesh, Kerala, Jharkhand, Chhattisgarh and Rajasthan rejected you. Chief ministers there have been elected to run the states. You cannot cross constitutional bars. There are sinister provisions in the Bill. The States must be authorised to take decisions," the TMC MP said, according to PTI.

"The Centre cannot impose its will on states. It is unconstitutional," O’Brien said.

The BJP, instead of preaching others to abstain from politics, should not indulge in politics, he said, adding the ruling party wants to take all the credit for schemes despite states contributing to them.

Terming the Centre's Ayushman Bharat' Yojana an imitation scheme, he claimed Bengal was way ahead in health schemes and it implemented insurance cover for even allied workers and included mental wellness of healthcare workers in it.

"The Centre is paying 60 per cent for the scheme and the state 40 per cent. But when it comes to credit, the Centre wants to take all credit," he charged.

He also attacked the government for perpetuating an “ordinance raj”.

This Govt cannot cross the constitutional bar. CMs are elected to run States.

Short clip from my speech on Epidemic Diseases Act #RajyaSabha on behalf of @AITCofficial pic.twitter.com/VF5CcQTgsU

"There are only three parliamentary democracies in the world in which this ordinance raj is still possible - India, Pakistan and Bangladesh. The emergency ordinance route is dangerous. Root of all ordinances is a 1935 Act. The Viceroy era is gone but the attitude of arrogance still remains with the BJP government,” O’Brien said.

Participating in the debate, K. Keshava Rao (TRS) asserted the Centre should consult states before taking decisions on their affairs.

On private health facilities, he said a hospital in Hyderabad overcharged a patient who had died. "We need protection from such hospitals. Dead bodies were piling up when I went to a hospital. We need a mechanism for that," he said.

He also said migrant labourers faced much ordeal because when they were leaving for their home states, the Centre suspended train services and asked state governments to stop interstate buses.

Ram Gopal Yadav of the Samajwadi Party stressed the need for a special provisions in the proposed Act to penalise people and private hospitals thriving on the Covid-19 crisis and using it to further their business.

He said there must be a provision to take action against those who sold PPE kits, masks, thermal scanners, ventilators, oximeters and sanitisers at inflated prices.

He also demanded to know what action the government was taking against those who claimed cures for coronavirus and fooled people selling drugs.

"Moreover, if the sole bread winner of a family has died due to Covid-19, he should be compensated and protected by the government," he said.

M. Shanmugam (DMK) asked the Centre: "What action are you going to take against contractors who brought migrant labourers to cities and left them to die?" He said labourers cannot be treated as a commodity and such people (the erring contractors) should be dealt with strictly.

He also accused the government of announcing a lockdown without preparations.

Among the others who spoke included A. Vijaykumar (AIADMK), Subhas Chandra Bose Pilli (YSRCP) and Saroj Pandey (BJP).