Venezuela is the third largest supplier of oil to India, which is the world's third biggest oil consumer 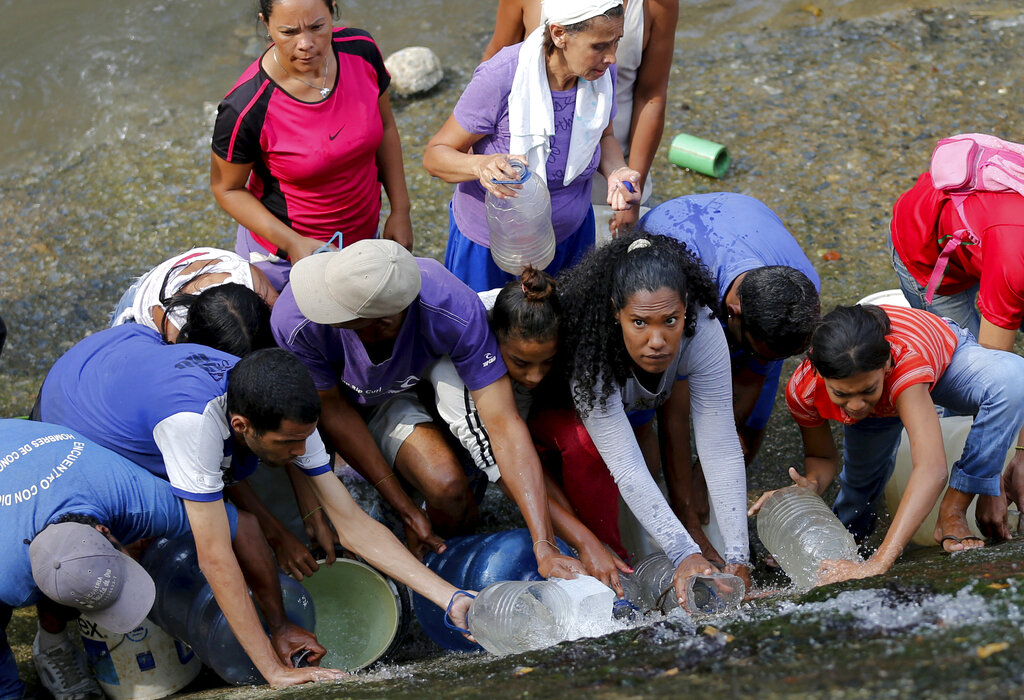 People collect water from a leaking pipeline on the bank of the Guaire River during rolling blackouts, which affect access to water in Caracas, Venezuela, on Monday, March 11. Opposition leader Juan Guaido says government mismanagement is responsible for the situation
AP Photo
PTI   |   Washington, D.C.   |   Published 12.03.19, 09:46 AM

US Secretary of State Mike Pompeo on Monday said he hoped that India will not be the 'economic lifeline' to the 'authoritarian' regime of Venezuelan President Nicolas Maduro by purchasing oil from the Latin American country.

Pompeo's comments came as Washington ramps up actions on Maduro's regime, which is battling to hold onto power in the face of heavy domestic and international pressure.

Venezuela is the third largest supplier of oil to India which is the world's third biggest oil consumer.

The issue was discussed in a meeting with the visiting Indian Foreign Secretary Vijay Gokhale, Pompeo told reporters at a news conference here, without providing insight into it.

'We are asking the same thing of India as we are of every country: Do not be the economic lifeline for the Maduro regime. So we talked about (Venezuela) I certainly won't characterise the conversations; they're private conversations,' Pompeo said in response to a question.

'In the same way that India has been incredibly supportive of our efforts in Iran, I'm confident that they too understand the real threat to the Venezuelan people. We had a good conversation around that,' Pompeo said.

The US has slapped sweeping sanctions on PDVSA with a view to curb Venezuela's crude exports and put pressure on socialist President Maduro to step down.

Venezuela produces around 1.57 million barrels of oil per day, half of what it produced two decades back.

With the US stopping imports from Venezuela, PDVSA is seeking to retain buyers in other big consuming countries such as China and India.

At the news conference, Pompeo said the nations that support Venezuelan President Nicolas Maduro are, by the nature of this 'illegitimate' regime, carrying out the very foreign interventionism of which they accuse others.

'Today, the United States is drawing a clear line between those who aid the forces of repression and those who give life to the Venezuelan people's democratic dreams. There is no ambiguity here about the truth,' he said.

Similar kind of warning to other nations was issued by US National Security Adviser John Bolton.

'The United States will not stand idly by while foreign financial institutions facilitate illegitimate transactions that benefit Maduro and his cronies, and perpetuate the corruption that has devastated Venezuela,' he said.

Earlier in the day, the Treasury sanctioned a Russia-based bank attempting to circumvent US sanctions on Venezuela's state-owned oil company PDVSA. It sanctioned Evrofinance Mosnarbank, a Moscow-based bank jointly owned by Russia and Venezuela, for being involved in facilitating illegitimate transactions that prolong Maduro's usurpation of democracy, it said.

'The illegitimate Maduro regime has profited off of the suffering of the Venezuelan people,' said US Treasury Secretary Steven Mnuchin.

'This action demonstrates that the United States will take action against foreign financial institutions that sustain the illegitimate Maduro regime and contribute to the economic collapse and humanitarian crisis plaguing the people of Venezuela,' he said.

In another tweet, Bolton asked international banks not to have relationship with the Maduro regime.

Maduro is facing a challenge from opposition leader Juan Guaido who declared himself acting president in January.

The US views Guaido as Venezuela's legitimate leader and has imposed sanctions on the country's oil sector besides taking other actions targeting top government officials.