Advertisement
Home / India / Do away with death penalty for rapes: Panel

Do away with death penalty for rapes: Panel 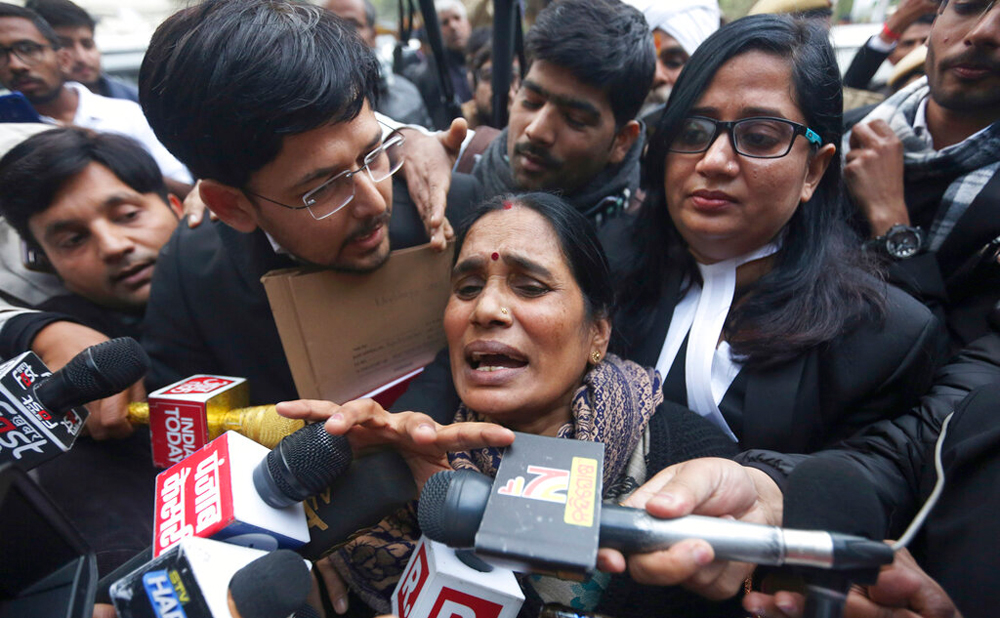 It seems all set.

The death warrants have been issued, and the hangman from Meerut and ropes from Bihar are being brought to hang the rape convicts in the Delhi gang-rape case of 2012. All preparations for their hanging seems to be in full swing for January 22.

The Supreme Court has, however, agreed to hear curative pleas of two convicts, Vinay Sharma, 26, and Mukesh Kumar, 32, on January 14. Two other convicts have not filed curative petitions.

While the country awaits and even celebrates their execution, the Justice J.S. Verma committee had made it clear seven years ago that it was “not inclined to recommend the death penalty”.

The committee, constituted on December 23, 2012, with Justice Leila Seth and Gopal Subramaniam as members, was formed after the brutal gang-rape on December 16, 2012, to look into possible amendments of criminal law to provide quicker trial and enhanced punishment.

The report took into account the views of “an overwhelming majority of scholars, leaders of women’s organisations, and other stakeholders” who were in agreement that seeking the death penalty would be a regressive step.

“Undoubtedly, rape deserves serious punishment. It is a highly reprehensible crime in the moral sense, and demonstrates a total contempt for the personal integrity and autonomy of the victim,” the committee also clarified.

This phrase, it said, is often used to describe the Indian approach to the death penalty.

The report quotes guidelines from the Bachhan Singh case which should be applied to the facts of individual cases like considering the circumstances of the offender and crime and making exception for gravest cases of extreme culpability.

The committee considered the phrase and still suggested an enhanced imprisonment as compared to death.

It said the punishment must be severe where situation warrants specific treatment. It said that in cases of offences of sexual assault, particularly gang-rapes accompanied by such brutality and violence that it leads to death or persistent vegetative state, severe punishment should be given, with minimum punishment being life imprisonment.

The committee mentioned the story of Aruna Shanbagh. She was a nurse who spent 42 years in a persistent vegetative state after being raped and strangled. Her tragic story also became the centre for the need to change euthanasia laws in India. She died in 2015.

The Justice Verma committee suggested inserting a new section, Section 376(3), in the punishment of rape in the Indian Penal Code. According to this section, punishment for causing death or a persistent vegetative state in the course of committing rape shall be “punished with rigorous imprisonment for a term which shall not be less than twenty years, but may be for life, which shall mean the rest of that person’s natural life”.

The committee acknowledged that rape is often accompanied by physical injury to the victim and mental and psychological damage, but was of the opinion that such offences should be graded.

“We do not say that such a situation is less morally depraved, but the degree of injury to the person may be much less and does not warrant punishment with death,” the report said.

The report cited a judgment by the US Supreme Court where it had held that the death penalty for rape of a minor was unconstitutional and was in the nature of “cruel and unusual punishment”.

“It is also stated that there is considerable evidence that the deterrent effect of death penalty on serious crimes is actually a myth,” the report said. It referred to the Working Group on Human Rights which found that murder rate in India has declined “over the last 20 years despite the slowdown in the execution of death sentences since 1980”.

Taking note of the argument that death penalty for rape may not have a deterrent effect, Justice Verma committee concluded that they enhanced punishment to mean remainder of life.

“Death penalty should not be given at all. Our systems of justice are too imperfect to take such a final irreversible step just to wreak revenge,' said Maja Daruwala, senior adviser at New Delhi-based international non-governmental organisation Commonwealth Human Rights Initiative (CHRI) and a leading campaigner against death penalty. CHRI was consulted and referred to by the Justice Verma committee. Daruwala has been advocating the importance of courts and judges upholding the idea that a convict should be given a chance to reform.