The package is designed to rekindle growth in the Indian economy, create more jobs and kick-start an investment cycle 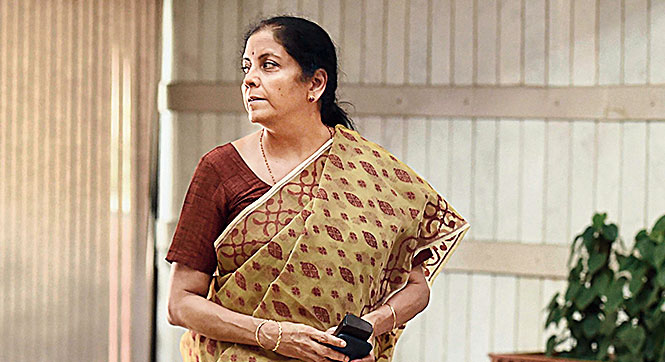 The mini-budget of tax measures came just a day after the Centre announced credit carnivals in 400 of the 731 districts in the country to re-ignite the consumption demand.
(PTI)
Our Special Correspondent   |   New Delhi   |   Published 20.09.19, 10:23 PM

The Centre stunned boardrooms and the capital markets on Friday by giving domestic manufacturing companies the option to pay corporate tax at the rate of 22 per cent without any exemptions while freeing them from the rigours of the minimum alternate tax (MAT) regime that P. Chidambaram famously introduced in the budget for 1996-97.

The effective tax rate for companies that choose to pay at the lower rate will be 25.17 per cent.

The package, announced by finance minister Nirmala Sitharaman in Goa, is designed to rekindle growth in the Indian economy, create more jobs and kick-start an investment cycle when companies have been reluctant to establish new projects.

The mini-budget of tax measures came just a day after the Centre announced credit carnivals in 400 of the 731 districts in the country to re-ignite the consumption demand.

The Sensex gained over 1,921 points, the biggest single-day vault in over a decade. The rupee rose by 66 paise against the US dollar to 70.68.

In the budget presented on July 5, the Narendra Modi government had slashed the corporate tax rate to 25 per cent for companies with revenues of up to Rs 400 crore - roughly 99.3 per cent of the entire universe.

Finance minister Sitharaman said companies incorporated after October 1 would be taxed at 15 per cent without exemptions.

The effective tax rate in the case of these companies will be 17.01 per cent, the finance minister said.

The MAT clause will be waived for the new companies as well.

Under the MAT regime, companies are required to pay tax at 18.5 per cent of book profits with the benefit of tax credits that can be set off in later years. The company is required to pay the higher of the sums calculated under the MAT formula and the income-tax calculations.

The newly incorporated companies have been permitted to start manufacturing by March 2023.

'The step to cut corporate tax is historic. It will give a great stimulus to #MakeInIndia, attract private investment from across the globe, improve competitiveness of our private sector, create more jobs and result in a win-win for 130 crore Indians,' Prime Minister Narendra Modi tweeted.

The reduction in the corporate tax rate will 'augur well for our economy', RBI chief Shaktikanta Das said in Mumbai.

The ordinance said that companies that opt for the lower tax rate with no exemptions would not be allowed to revert to the existing tax regime.

Companies that decide to stick to the current tax regime will be permitted to opt for the 22 per cent corporate tax rate when the current, period-specific exemptions fade out.

Investor wealth swelled by Rs 6.8 lakh crore as a wave of euphoria swept through the markets over the surprise fiscal stimulus package.

Similarly, the rupee surged by 66 paise against the US dollar to 70.68 soon after the announcement before closing at 70.94, a gain of 40 paise.

'The steps to pump-prime the economy will lead to a big reset and revive the animal spirits of Corporate India. The tax reduction will not only lead to economic buoyancy but will also make the industry more competitive globally,' said Aditya Birla group chairman Kumar Mangalam Birla.

Not everyone was impressed.

'Tax incentives are not the only thing that investors will be looking at while seeking to invest and shifting base from China. They look at different aspects, including ease of doing business, economic condition, domestic demand, labour among others,' said trade economist Biswajit Dhar of Jawaharlal Nehru University.

Noted economist Pronab Sen said the move was another instance where the government was trying to address the supply side when the economy was crying for demand-side measures. 'This is unlikely to boost demand in the economy and spur growth,' he added.

N.R. Bhanumurthy of the National Institute of Public Finance and Policy said: 'The government needs to come out with more measures to encourage investment which would help in the economy getting back on track.'

The tax breaks - which were notified through a presidential ordinance issued later in the day - mean that the government will forego revenue worth Rs 1.45 lakh crore, which could put a fiscal strain on its finances.

A note prepared by the SBI's research team estimated that the fiscal deficit would expand by Rs 82,000 crore, roughly 0.4 per cent of the GDP, even after factoring in the recent transfer of the RBI's surplus funds to the Centre.

The budget had put fiscal deficit at 3.3 per cent of the GDP. Economists at HDFC Bank, however, felt that the fiscal deficit could rise to as high as 4.1 per cent, forcing the government to borrow another Rs 1.5 lakh crore beyond the budgeted Rs 7.04 lakh crore.

Rating agency ICRA's chief economist, Aditi Nayar, said the government would have to slash expenditure if it wanted to put a lid on the fiscal deficit and rising bond yields. The 10-year bond rose 20 basis points to 6.8 per cent on Friday.

Sitharaman ducked questions about the fiscal deficit at her news conference.

The government also extended a tax break to companies that have announced share buybacks before July 5 -- the day Sitharaman had presented her budget.

Companies have been using the buyback route to return wealth to shareholders after the government had slapped a tax on dividend.

In July, the Modi government imposed a 20 per cent tax on share buybacks by listed companies. Both Wipro and Infosys have carried out large share buyback programmes this year and will benefit from the tax relief. 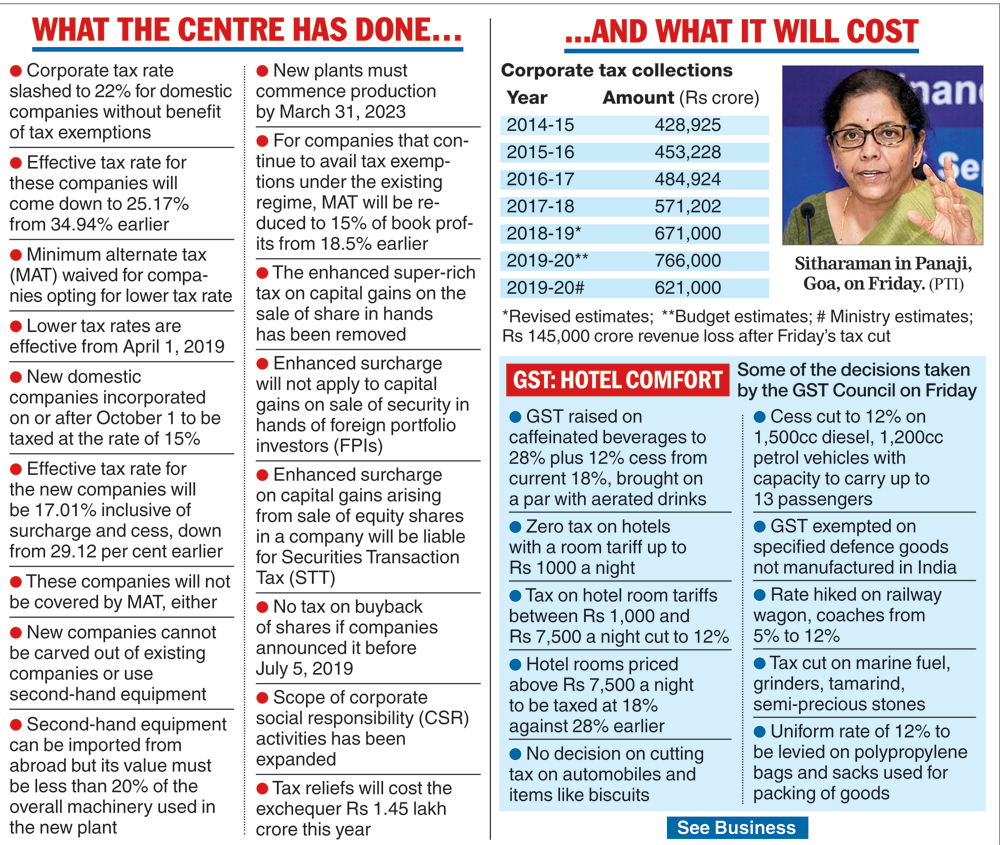