Susheel Manav, a journalist with Jan Chowk, was asked why he was filming the area 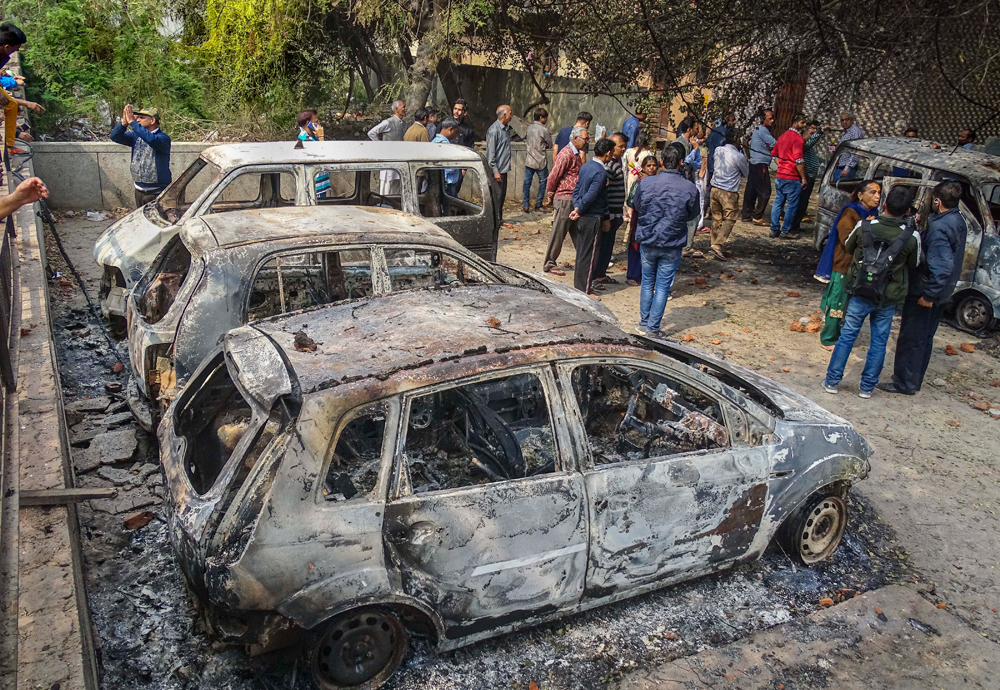 A journalist with a Hindi news portal alleged on Wednesday that he was assaulted while filming in a riot-hit area and forced to drop his pants to check if he was circumcised.

Susheel Manav, a journalist with Jan Chowk, said he was riding pillion on a motorcycle driven by theatre person Awadhu Azad at Lane 7 of northeast Delhi’s Maujpur when they were stopped. Lane 7 was where a head constable was killed by rioters on Monday.

“I was doing a Facebook Live session for Jan Chowk’s page on Wednesday while riding pillion. We had driven about 100 metres into the lane from the main road when we were stopped by motorcycle-borne men who asked why I was filming the area,” Manav told The Telegraph.

The Facebook Live video ends when a black Hero Honda Splendor pulls up beside Manav and Azad and a man is heard asking: “Video kyun bana raha hai (Why are you filming)?”

Manav is heard replying: “Media se hoon, bhai (I am from the media, brother).”

A man is heard countering him by asking: “Media se hai toh video kyun bana raha hai (If you are from the media, then why are you filming)?”

Manav told this paper later that the group accused the media of not filming in minority-populated areas and showing “what they were doing there”.

Manav said he had toured areas with considerable minority presence, too.

Manav said: “They snatched my phone (on which I was filming). I tried showing my identity card but they wouldn’t listen, and pushed us off the bike. Around 20 to 25 men aged between 20 and 40 years had surrounded us by then. They had lathis and steel rods. Around five of them had country-made pistols.”

He added: “They started hitting us with the rods. One man pressed a pistol to my stomach. I cried out: ‘I am Hindu, I am a Brahmin.’ They demanded that I recite the Hanuman Chalisa. Even after doing so, they asked us to take off our pants. We were injured, and Awadhu was bleeding. They did not believe we were Hindu and wanted to check.”

Outnumbered, and not a policeman in sight, they obeyed. “Even after they saw that we were not Muslim, they hit us and asked why we were filming. Just then, two Delhi police constables came along and told them to leave us.”

“They handed us over to the police and later gave our mobile phones to them. They had earlier taken away whatever money we had in our pockets. The policemen did not do anything to them. They just accompanied us to the main road,” said Manav, who has not yet filed a police complaint.

Asked why he had not filed a police complaint, Manav said: “I saw that the police weren’t interested in catching these goons. I just wanted to get back home to safety.”

They rode into Babarpur, a neighbouring area. “Awadhu was bleeding from a gash behind his head. This was a Muslim area and people from the shops there came forward to help us. I told them our names and that I was a journalist and we needed help as we had no money. The people took us to a small clinic, which did not charge us any money for treatment. We were bandaged and given tetanus shots by paramedical staff as the doctor was not in,” Manav said.

He did a Facebook Live session from the clinic too.

“A Muslim mechanic offered to help us reach home. We said we didn’t want to return to the main road as the mob might have followed us. An auto driver then accompanied us, riding beside our bike till Welcome (an area nearby)….

“I must say that just before I left for work this morning, my mother had called me up (from Allahabad) warning me not to go to any Muslim area. She had seen the riots on TV,” Manav said.