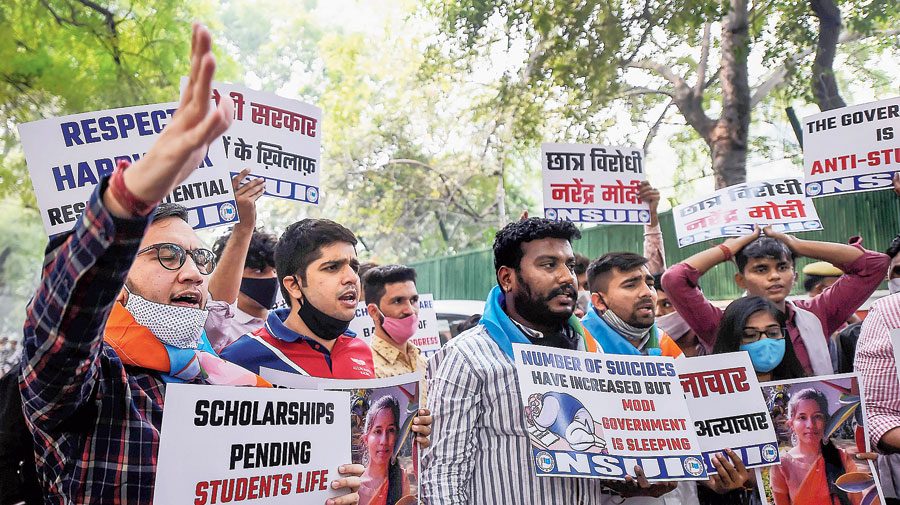 A student’s suicide after being asked to vacate her hostel has underlined how Delhi’s colleges have for decades neglected to expand boarding facilities, forcing students to stay in private lodgings paying high rent but often without enough security.

Aishwarya Reddy, second-year BSc student with Lady Shri Ram College, hanged herself after being asked to vacate her hostel seat by November 10 in keeping with a new first-year-only hostel policy.

Her mother said Aishwarya had expected private accommodation in Delhi to cost Rs 15,000 a month and was worried how to afford it.

Calcuttan Paroma Ray’s experience from a few years ago shows how the failure to secure a hostel seat in Delhi can escalate the cost of education for outstation students.

Staying in private rooms had more than doubled the money Paroma needed to spend on rent and meals during her undergraduate and postgraduate studies in Delhi colleges between 2013 and 2018. (See chart)

Paroma had opted not to accept a hostel seat at either Lady Shri Ram or Ramjas because of a 7.30pm curfew that would have hobbled her social life and her voluntary service with an organisation that teaches poor children.

“The hostel rules were too restrictive. They would have severely limited my exposure to extracurricular activities and social life,” she said.

However, the problem of high rent remains the same for those of her peers who seek but are denied hostel seats because there are too few of them. And those that are available are often allotted on the basis of exam scores rather than need.

The yearly hostel fees, which include meals, tend to range from Rs 60,000 to Rs 70,000. Rents for private accommodation — whether one stays as a single paying guest or shares rooms in hostels or “guesthouses” — vary a lot more and do not include food.

Paroma paid Rs 1.02 lakh a year for her room at upscale Greater Kailash and Rs 84,000 after shifting to Mukherjee Nagar near the North Campus of Delhi University.

Shweta Kumari, a third-year student of Lady Shri Ram from Ranchi, had applied for a hostel seat during admission in 2018 but failed to get one.

By then, she said, landlords in Greater Kailash were charging anything between Rs 15,000 and Rs 25,000 as paying guest rent. So she got herself a seat at a polytechnic hostel, paying close to Rs 10,000 a month, the fees covering meals.

“But I couldn’t stick the oily food, like bread pakoras, for breakfast,” she said. So she moved to Amar colony, paying a monthly rent of Rs 8,000 and spending close to Rs 5,000 on food — more than two-and-a-half times what she would have spent as a hostel boarder.

The lockdown brought its own problems, with the landlord continually calling her at Ranchi and demanding rent. She paid up and promised “to pack all my stuff as soon as the lockdown ended”.

“This disturbed my mental health a lot,” Shweta said. “In October, I had to go to Delhi to get my stuff, risking my health.”

She said the ordeal had destroyed whatever “beautiful memories” she had of her days as a student in Delhi.

Delhi University’s nearly 70 colleges admit 66,000 undergraduate students in regular courses every year, which means they have a combined student strength of about 2 lakh undergraduates at any time.

None of Delhi University’s colleges has expanded its hostel facilities for over two decades. Lady Shri Ram, which has over 2,000 students, has a single hostel with 288 seats. The last expansion the hostel witnessed came in 1988, with 18 rooms added.

The Delhi University colleges increased their student intake by 54 per cent in 2007-08 when Other Backward Classes reservation was implemented, and by a further 25 per cent over the past two years to make room for the Economically Weaker Sections quota.

“Given the increased intake and the increased percentage of students coming from outside Delhi, the existing hostel facilities are inadequate,” Ujjayini Ray, hostel warden at Lady Shri Ram, acknowledged. She said this was a matter for higher authorities.

Delhi University executive council member J.L. Gupta said the university and its colleges had never given priority to hostel expansion.

“The hostel seats should have been increased in 2007-08 itself, when the OBC quota was implemented. But while the UGC provided funds for the expansion of classrooms and teaching posts at the time, it gave no funds for hostels,” Gupta said.

Unnimaya, students’ council secretary at Lady Shri Ram, said: “Students have long been demanding the expansion of hostel facilities but the college and the university never sought the funds from the University Grants Commission.”

She added: “Nor did the government or the UGC release funds for hostel expansion on their own.”

Unnimaya said Section 33 of the DU Act mandated hostel accommodation for all students except those studying in the distance mode.

Paroma said the students had long been asking the university to rent private rooms and accommodate students at subsidised rates there if it could not build enough hostels, but nothing happened.

She said she was fortunate enough not to have faced any security issues while staying in private rooms, but many of her friends had.

“Sometimes the owners installed CCTV cameras in the common rooms (in private hostels), causing the girls to feel vulnerable because men (security staff or members of the landlord’s family) would watch them on camera in the name of safety,” she said.

“But when they did actually face harassment (from local men), the landlord would refuse to intervene and throw them out instead.”

Paroma, who recently enrolled in a PhD course at the Central University of Hyderabad, hopes to get a hostel seat when the campus opens for offline activities.

For postgraduate students, Delhi University’s 19 hostels offer 3,580 seats. Two of these, the Rajiv Gandhi Hostel for Girls and Undergraduate Hostel for Girls, were built in 2012 with 772 and 688 seats, respectively.

An email sent to the education ministry and the UGC on Thursday asking why they had not provided funds to build new college hostels has brought no response.

With the National Education Policy seeking to promote private universities and push public universities into offering courses in the self-financing mode, higher education is likely to witness a rise in fees everywhere and a decrease in subsidies for poor students.