Over 10,000 security forces and dozens of drones have been deployed, besides setting up hundreds of CCTV cameras 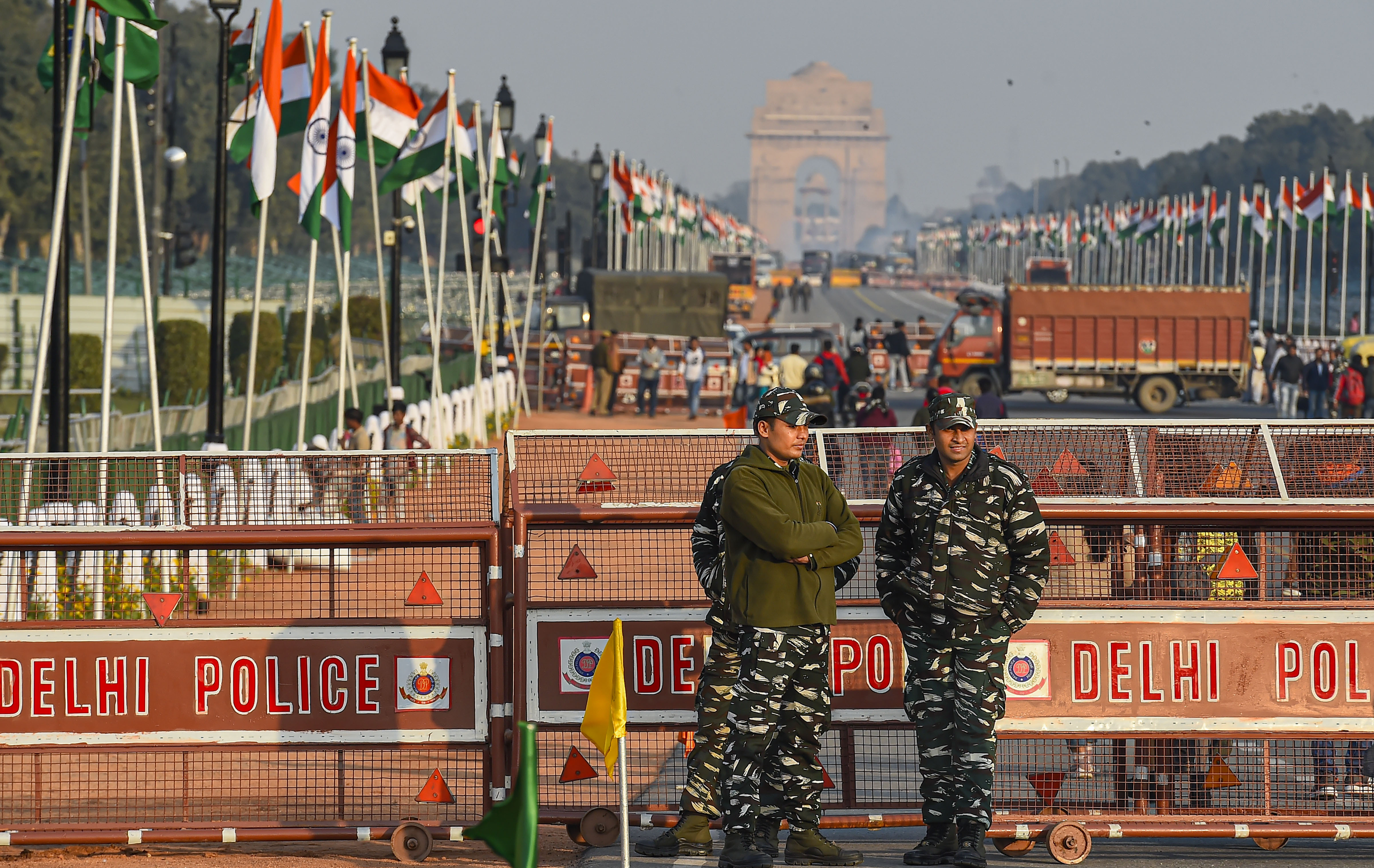 With the 71st Republic Day celebrations set to begin in New Delhi shortly, the entire national capital has been put under a multi-layered, ground-to-air security cover with thousands of armed personnel keeping a tight vigil over it, including the celebration venue Rajpath.

Aided by dozens of drones in the air and hundreds of CCTV cameras and facial recognition devices, besides several anti-aircraft guns on the ground, the security personnel are keeping a hawk-eyed vigil over Rajpath, where President Ram Nath Kovind and Prime Minister Narendra Modi will be celebrating the occasion along with chief guest Brazilian President Jair Bolsonaro and other dignitaries, besides thousands of citizens.

Over ten thousand security personnel have been deployed to keep vigil over the Republic Day celebrations on Sunday, said officials.

Sharpshooters and snipers have been deployed atop high-rise buildings to keep watch on the eight-km-long parade route from Rajpath to the Red Fort, they said.

The celebration venue Rajpath will remain inaccessible to general traffic till 12 noon, till when the entry and exit gates of the Central Secretariat, Udyog Bhawan, Patel Chowk and Lok Kalyan Marg metro stations too will remain closed, beginning from 8.45am.

The Delhi police have also installed its facial recognition devices at all entry gates of the R-Day celebration venue to identify miscreants and suspects, said officials.

Special security arrangements have been made for Brazilian President Bolsonaro, who is the chief guest for the Republic Day parade, deputy commissioner of police (New Delhi) Eish Singhal had said earlier.

More than 2,000 traffic police personnel have been deployed to ensure smooth flow of the traffic and facilitate spectators reach the venue.

Hundreds of CCTV cameras too have been installed as part of the security arrangements, including at least 150 cameras in areas covering the Red Fort, Chandni Chowk and Yamuna Khadar, they said.

'We have a four-layered security arrangement. Inner, middle, outer and one along the border areas across the national capital,' said Singhal, adding drones have also been deployed to aid and assist security personnel on the ground and give feed to them on the general and security scenario around them.

'Around 5,000 to 6,000 Delhi police personnel have been deployed in the New Delhi district along with 50 companies of paramilitary forces,' he added.

With the Republic Day celebration being held within a fortnight of the upcoming Delhi Assembly elections, police personnel have even otherwise been on alert, the official said.

The police have already been undertaking various security measures, including the anti-terror ones, like checking people and vehicles entering Delhi, intensified patrolling of malls and markets and enhancing security cover of vital installations, besides intensifying the regular verification of tenant and servants, the officials said.

The police have also asked hotels, taxi and auto drivers to remain alert. In view of the heightened security, patrolling in public places has been intensified.

'We have intensified patrolling in public places. Group patrolling and vehicle checking is being carried out with the help of Central Armed Police Forces. Frisking at metro stations, railway stations, airport and bus terminals has also been intensified,' a senior police official said.

Apart from securing the celebration venue Rajpath, adequate security and traffic arrangements for the 'At Home' function at Rashtrapati Bhavan too have been made.

The security personnel have identified vulnerable spots such as crowded markets, railway stations, bus stands and other high-value establishments, where extra police personnel have been deployed.

A traffic advisory has also been issued about the elaborate arrangement route diversions on Sunday, as per which no traffic was allowed on Rajpath from Vijay Chowk to India Gate since 6 pm on Saturday, the officials said, adding the ban will continue till the parade gets over on Sunday.

Flying of sub-conventional aerial platforms like para-gliders, para-motors, unmanned aerial vehicles, microlight aircraft, remotely piloted aircraft, hot air balloons, small-size powered aircraft, quadcopters or para jumping from aircraft have been prohibited over the jurisdiction of the city till February 15, according to an advisory.

It has also asked people to report to the nearest police station in case they see any unidentified object or suspicious person.