Parades to start from Ghazipur, Singhu and Tikri border points of Delhi 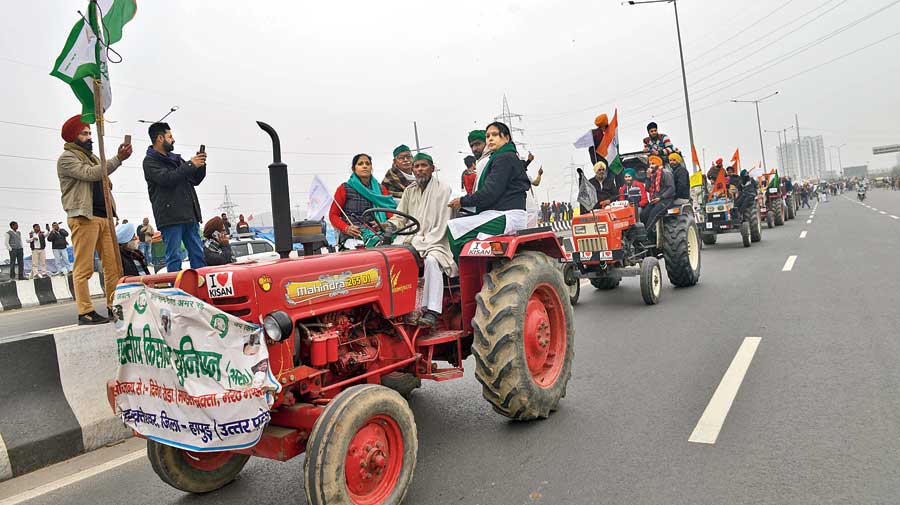 Farmer leader Abhimanyu Kohar on Saturday claimed that the Delhi Police has given its nod to the farmers’ tractor parade on Republic Day in the national capital.
Telegraph Picture
Our Bureau And Agencies   |   New Delhi   |   Published 23.01.21, 09:55 PM

Farmers protesting against the Centre’s three new farm laws on Saturday claimed that the Delhi Police have given them permission  to hold their tractor parades on January 26 in the national capital.

The tractor parades will start from the Ghazipur, Singhu and Tikri border points of Delhi, but details will be finalised tonight, farmer leader Abhimanyu Kohar said after attending a meeting between the unions and the police.

Kohar claimed that the Delhi Police has given its nod to the farmers’ tractor parade on Republic Day in the national capital.

Talking to reporters, another farmer leader Gurnam Singh Chaduni said that as thousands of farmers will participate in the parade, there will be no single route.

Farmers have repeatedly ensured that the rally will remain peaceful, as some leaders have expressed concerns over it.

Farmer leader Darshan Pal said that barricades set up at Delhi border points, will be removed on January 26 and farmers will take out tractor rallies after entering the national capital.

Earlier in the day, 32 protesting unions met at the Singhu border near Delhi, a major protest site, to reconsider the government’s proposal to put the contentious legislations on hold.

This comes a day after the government asked farmer leaders to revert by Saturday in case they agree to its proposal to suspend the laws for 18 months.

Unlike the last 10 rounds of talks between the government and farmer leaders, the 11th round on Friday saw both sides hardening their positions. They could not even reach a decision on the next date for the meeting.

The government asked farmer unions to revert by Saturday in case they agree to the suspension proposal and the talks can continue only thereafter.