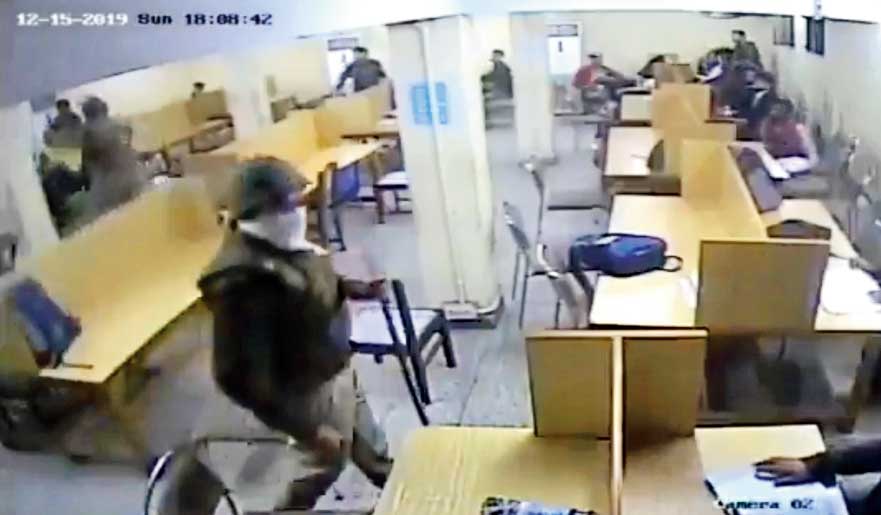 Footage from the video clip released by the Jamia Coordination Committee shows police swinging lathis overhead and landing blows on youngsters in what looks like the reading room in the Ibn-e-Sina block in the varsity. The date of the footage is December 15, 2019.
Sourced by Telegraph
PTI   |   New Delhi   |   Published 17.02.20, 08:08 PM

Delhi High Court on Monday asked the Centre, the AAP government and city police to respond to a plea by a Jamia Millia Islamia student who has sought compensation for injuries he suffered in police action on protesters against the Citizenship (Amendment) Act on December 15.

The bench of Chief Justice D.N. Patel and Justice C. Hari Shankar had initially said the petitioner should have filed a civil suit if he was seeking compensation.

“These are matters of evidence. Why are you not filing a suit for damages? On the basis of annexures in a writ, claims cannot be proved,” the court said, adding “it has become a fashion in Delhi to file a writ for everything”.

But the bench subsequently issued notices to the home ministry, the university, the Delhi government and police seeking their stand on the student’s plea that alleged that both his legs got fractured in the “brutal violence carried out” by security personnel. 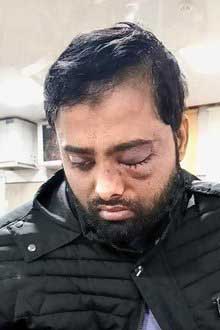 Earlier, another student, Mohd Minhajuddin, had moved a plea seeking a probe and demanding compensation for injuries he suffered. Minhajuddin, according to his plea, lost vision in one eye.
Sourced by Telegraph

In his plea filed through advocate Nabila Hasan, Shayaan Mujeeb contended that he was studying in the university library on December 15 when police personnel entered the building and beat up the students there.

Hasan said available CCTV footage shows the police entering the library and beating up the students.

CCTV footage released on Saturday night by the Jamia Coordination Committee, an umbrella under which students and alumni have closed ranks, has revealed chilling images of police brutality in what appears to be a reading room of the university.

Hasan has sought a compensation of Rs 2 crore for his injuries and the registration of an FIR.

The petitioner has also sought reimbursement of Rs 2 lakh, claiming he spent the amount on treatment.

Earlier, another student, Mohd Minhajuddin, had moved a plea seeking a probe and demanding compensation for injuries he suffered. Minhajuddin, according to his plea, lost vision in one eye.

On December 15, a protest against the CAA near Jamia had turned violent, the demonstrators allegedly stoning the police and setting vehicles on fire.