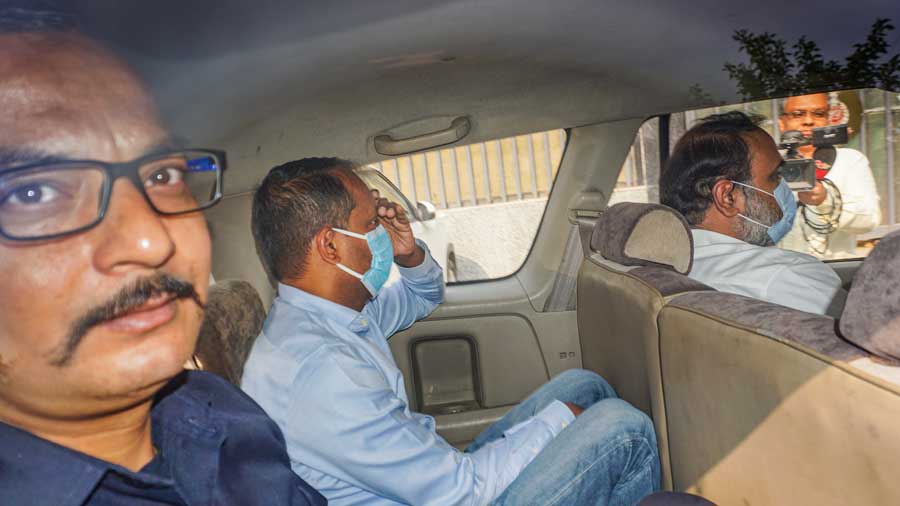 The Delhi excise policy, scrapped over allegations of corruption, was "leaked" to certain liquor manufacturers much before its release and a probe found that three dozen VIPs, including Deputy Chief Minister Manish Sisodia, changed as many as 140 mobile phones with the intention to destroy digital evidence, the ED said Thursday.

"The Delhi govt/excise department under the influence of accused persons allowed the formation as well as operation of cartels even when enough information was available on public platforms to indicate cartelisation by majority of the licence holders."

"This was done in exchange of bribes and kickbacks to Delhi excise officials and the members of the Delhi govt," the agency alleged while seeking the remand of the two.

It said several people questioned by it during the course of investigation "have revealed that bribe to the time of Rs 100 crore had been given in advance for undue benefits to select business groups to operate in the Delhi excise policy 2021-22."

"It has also been found that kickbacks and bribes were demanded and taken by the excise officials of Delhi for opening of retail shops in Delhi."

The agency said "34 important persons involved/suspected to be involved in the excise scam have changed total 140 phones (valued at about Rs 1.20 crore) with intention to destroy digital evidence during relevant period."

"These persons includes all the main accused, liquor barons, senior government officials, excise minister of Delhi and other suspects. The timing of change of phone indicates that these phones were mostly changed just after the scam surfaced," it said.

Sisodia, the minister for finance and education, held the excise charge.

The agency said it has evidence that indicate the policy was "leaked" to certain liquor manufacturers on May 31 last year while it was made public two months later on July 5, 2021.

The agency also alleged that a "large number" of approvals to L1 wholesalers were given by excise officials "beyond working hours or late at night".

Benoy Babu, the ED alleged, played a "crucial role in perpetuating the Delhi liquor scam" and that he colluded with Sameer Mahandru and others to create a "nexus of manufactures-wholesalers-retailers to gain market share by unethical means."

"Analysis of the email dump of Benoy Babu revealed that he was in possession of the excise policy much before the same was made public and also that he was aware of day-to-day developments happening in policy formulation," it said.

It alleged Babu created "severe loopholes" in the policy that eventually gave "undue" benefits to Pernod Ricard such as price increase for its brands and scope for cartel formation through which Pernod Ricard would be able to control significant retail market and push particular brands.

Informing the court about Reddy's role, the ED said he was "one of the kingpins and major beneficiary" of the alleged scam.

Reddy, it said, was a "key partner" in the biggest cartel (named as south group by Dinesh Arora in his statement) of manufactures, wholesaler and retailers.

This cartel, it alleged, "effectively controlled 30 per cent of the Delhi liquor market by series of illegal activities involving giving kickbacks, using benami and proxy entities and conspiracy with various stakeholders in the liquor industry."

It said this cartel and Reddy gave "kickbacks" of Rs 100 crore through businessman Vijay Nair, arrested earlier by the CBI in this case.

Reddy "actively planned and conspired with various business owners and politicians and indulged in unfair market practices to gain undue advantage in the Delhi excise policy," the ED alleged.

The agency said it has so far undertaken 169 search operations in this case, filed after taking cognisance of a CBI FIR which was registered on the recommendation of the Delhi lieutenant governor.