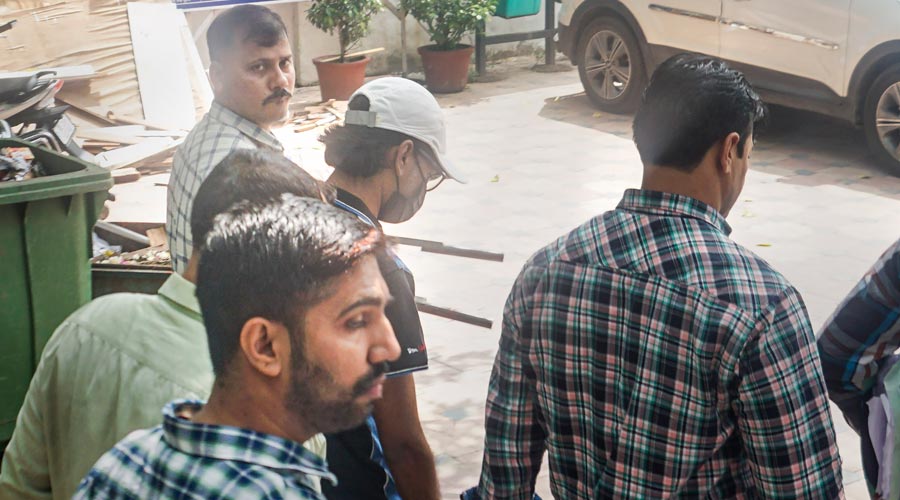 Delhi Police on Saturday said a court here has dismissed the bail plea of Alt News co-founder Mohammed Zubair and sent him to 14-day judicial custody in a case related an "objectionable tweet" he had posted in 2018 against a Hindu deity.

However, Zubair's lawyer Soutik Banerjee said no order has been pronounced yet.

According to a senior police official who did not wish to be identified, Chief Metropolitan Magistrate Snigdha Sarvaria allowed its remand plea, which said further investigation was on.

After the police application, Zubair had moved a bail application before the court.

Following the police plea, advocate Vrinda Grover, appearing for the accused, moved a bail application before the court on the ground that her client was not required for the investigation any further and said I (Zubair) am not some terrorist that they need to secure my presence.

During the hearing, Public Prosecutor Atul Srivastava also informed the court that the police has invoked new provisions -- sections 120B (criminal conspiracy) and 201 (destruction of evidence) of the Indian Penal Code and section 35 of the Foreign Contribution (Regulation) Act -- against Zubair.

He claimed that the accused accepted money through Razorpay payment gateway from Pakistan, Syria and other countries, which requires further investigation.

He came to office of special cell with phone. When it was analysed, it was found that prior to that day, he has been using another sim. When he received notice, he took out the same and put it in new mobile. Please see how clever the person is, the prosecutor told the court.

He added that the probe agency may need further custody of the accused and may move an application since the investigation was not complete in the matter.

Grover opposed the police plea seeking judicial custody and said, We are not living in police state. Till they demonstrate a prima facie case, if it's made out, I'll submit to law. But if they don't, it's not a police state .

She claimed that since the story of section 153A (promoting enmity between different groups on grounds of religion, race, place of birth, residence, language, etc) is over, police was telling media that Zubair was taking money, naming some countries.

I (Zubair) am making a statement I was not taking the money. It was the company, the counsel said.

The court was misled when told that the accused has received foreign contributions, she said.

Alt News runs under a company under sec 8. They are saying I am a journalist, I cannot receive FCRA. This is to the company, not to me. It hasn't gone into my account. I am making a categorical statement, she said.

Grover further told the court that the phone seized by the police was not of the time when the tweets were made.

Tweet is of 2018, the phone is which I (Zubair) am using presently. I haven't even denied the tweet, she said.

Grover told the court that the entire exercise was malafide in nature and was a non prosecutable action of FIR, which started from a story of four-year-old tweet.

Is it a crime to change my mobile phone or sim card? Is it a crime to reformat my phone? Or is it a crime to be clever. None of this is offence under Penal Code. If you don't like someone, that's okay but you can't cast aspersion on a person of being clever, she told the court.

She claimed that there was likelihood of tampering by police, adding that till date the agency had not given the hash value (a fixed length variable, created using Mathematical Hash Function to check integrity of a digital data or device) of the phone.

Tweet says March 2018, Twitter for Android. Everybody understands that this tweet was done from Android phone. It couldn't have been done from a laptop, she said.

Grover added that there has been a seizure of laptop, which she claimed, was not required, terming it excessive .

This case is a dead end, she said.

My phone was snatched by somebody on bike. Nothing unusual. I lodged a complaint in 2021. This was a phone I was using in 2018. This document is on record within knowledge of special case in the unrelated case in which Delhi High Court has given me protection.

This phone isn't with me, was informed to them. You didn't call me in this matter. You called me in a matter in which you said no offence was made out against me, she said.

Grover said there was a need of an enquiry into the person tweeting about Zubair's tweet and how it got picked for the complaint.

Grover reiterated that the reported picture used in the tweet in question by Zubair was from a scene in a 1983 Rishikesh Mukherjee film Kissi Se Na Kehna'.

It's a very sweet comedy. A completely innocent comic scene made by a renowned director. Till this was pulled up saying that this was so sensitive that public tranquility will be disturbed. These tweets are still on Twitter. No direction on Twitter to pull it down. For 40 years this film has created no disturbance, and an anonymous account with one follower is creating all these mischief, she said.

She said it was a harmless clip.

You have a problem with the film, sue CBFC. If we have lost any sense of humour then even penal code will not help us, Grover said.

She added, My tweet is an image of a film. I haven't said a word. My tweet doesn't refer to any religion or religious group. It doesn't say anything inciteful for any God.

On the tweet being from a movie, public prosecutor Srivastava said, There are other movies also where there are many vulgar things Can we upload anything we want. There are many things?

He said the police it still investigating and may drop some offences or add some new offences.

So to argue that nothing is made out is not true We can again move for PC (police custody) remand. Many things are yet to come, he said.

Why have you said this, Srivastava asked.

On court's query regarding what further investigation was left on the basis of which police said it will ask further PC and how much time will it take for the agency to search, the prosecutor said the police needed time to find out how much money was received from which country and person.

Zubair was earlier booked under section 153 (wantonly giving provocation with intent to cause riot) and 295 (injuring or defiling place of worship with intent to insult the religion of any class) of IPC.

Section 295A (deliberate and malicious acts, intended to outrage religious feelings of any class by insulting its religion or religious beliefs) was also invoked against him later.