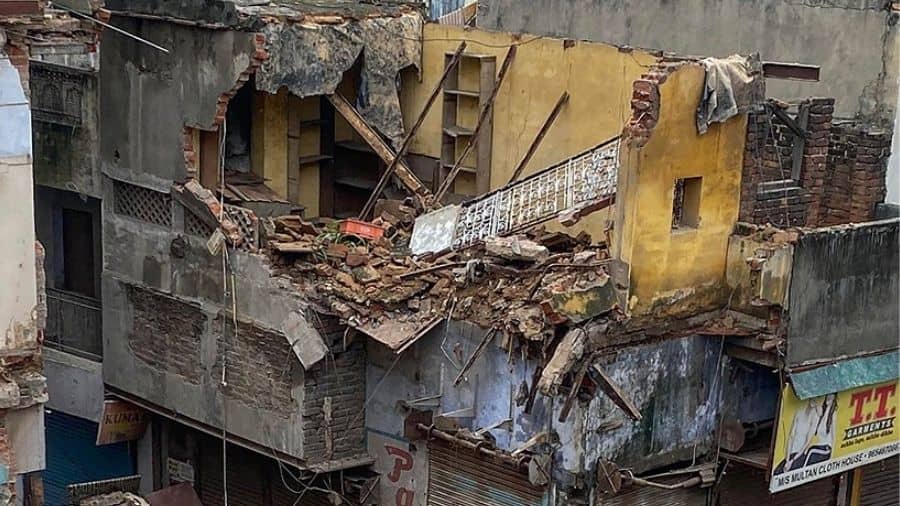 A four-storey building in north Delhi's congested Sabzi Mandi area collapsed on Monday, killing two brothers who were passing by with their mother and were trapped under the debris, officials said.

The two children were aged seven and 12, the police said, adding that a case has been registered against a man named Mohak Arora who had undertaken the renovation work on the ground floor of the building.

The police said, “72-year-old Ramji Das, who was also trapped under the debris and suffered a head injury, was rescued and rushed to a nearby hospital for treatment.”

“He is stated to be out of danger,” they said.

The ground floor of the building, believed to be 75-years-old, was being used for commercial purpose while the rest was residential.

"It is not yet confirmed whether anyone else is trapped under the rubble. Rescue operations are underway to ascertain that," a senior police officer said.

N S Bundela, Joint Commissioner of Police (Central), said that the two children, both brothers, were rescued and taken to a hospital where they were declared brought dead.

"They were passing by with their mother when the building collapsed and the two bothers got trapped under the debris," he said.

The two children -- Somya (12) and Prashant Gupta (7), were residents of Roshnara Road in old Delhi.

Their father Nitin Gupta (38) works at a shop in north Delhi's Sadar Bazar while their mother is a housewife, according to the police.

A senior police officer said, "A case has been registered under section 304 (Punishment for culpable homicide not amounting to murder), 288 (Negligent conduct with respect to pulling down or repairing buildings) and 34 (Acts done by several persons in furtherance of common intention) of the Indian Penal Code."

The incident comes days after record heavy rains pounded Delhi, throwing life out gear. An old building in Delhi's Narela area, which was declared a dangerous structure by civic authorities, had collapsed recently. However, no one was injured in that incident.

Das, a resident of Malka Ganj here had a 'paan' shop near the building. He was at his shop when the structure collapsed, police said.

Assistant Commandant, NDRF, Shri Niwas said, "Two teams of the NDRF were at the spot conducting rescue operation. We used cameras to see whether people were trapped under the debris or not. We are not confirmed about the number of people trapped inside it."

A car parked nearby was severely damaged as the debris from the building fell on it. The locals who gathered at the spot to help with rescue operations were later removed from the area.

Three brothers lived in the other residential floors of the building. An 18-year-old member of one of the families, who was on second floor, had a narrow escape when the building collapsed.

Hemantica Aneja (40), a resident of the building and a Supreme Court lawyer said, "Our family has been living here for the last 35 years and it is a well-maintained building. Fortunately none of us were at home when it collapsed and my 18-year-old nephew Aryan who was on the second floor of the building also managed to after when he heard a loud noise.

Aneja said for the last 10 days, renovation work was going on at a milk shop on the ground floor of the building which also led to cracks in the walls of the floors.

"Usage of electric drill further weakened the structure leading to its collapse," she alleged.

"They were in front of the building when it collapsed and the two boys unfortunately were buried under the debris. One 'paan' shop owner was also trapped."

Ravi Kumar, another local, was terrified and rushed towards the building when he heard a loud noise.

"I live on the other side of the street and heard a loud noise. We rushed to the spot and found debris on the road. We then started helping people. From what we heard, some construction work was going on the ground floor of the building which eventually led to the collapse," he claimed.

Teams of MCD and the NDRF were also at the spot to undertake rescue operation.

The Delhi Fire Service received a call about the incident at 11.50 am, following which which seven fire tenders were rushed to the spot for rescue operations, said Atul Garg, the director of DFS.

"The incident of building collapse in Sabzi Mandi area is very sad. The administration is engaged in relief and rescue work. Through the district administration, I am myself monitoring the situation," he tweeted in hindi.

North Delhi Municipal Commissioner Sanjay Goel said, "Rescue and relief operation is going on, and debris are being removed. We are trying to find out what led to the collapse of the building in which two children have died".

The building was located in Malka Ganj ward of Civil Lines Zone of the North Delhi Municipal Corporation.

We will probe the cause of the incident and then take appropriate action according to the report that we get," he said.

"Two people were evacuated safely. About 7-8 more people feared to be trapped inside," he tweeted in hindi.