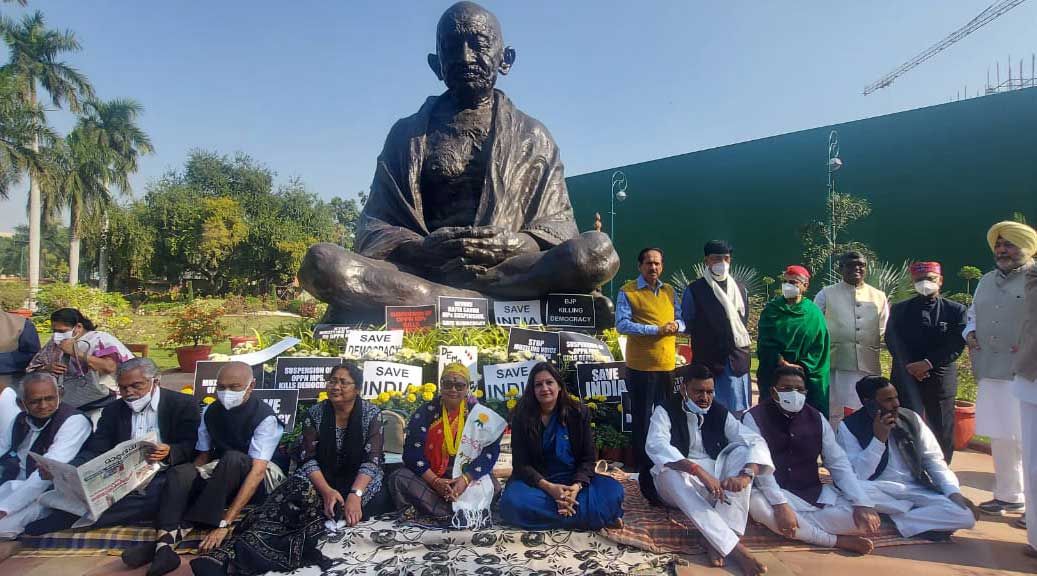 A defiant Opposition on Wednesday said it has been forced by the government to protest against the "wrongful and undemocratic" suspension of 12 Rajya Sabha MPs, while asserting that it would not apologise as it has done no wrong.

Opposition leaders accused the Centre of vilifying them so that they do not raise issues of public importance in Parliament.

A number of Opposition MPs in the Rajya Sabha boycotted the house proceedings and sat on a dharna in front of Mahatma Gandhi's statue inside the Parliament complex in support of the suspended members.

The Congress accused the government of derailing democracy and deliberately muzzling the voice of the Opposition.

Leader of Opposition in the Rajya Sabha Mallikarjun Kharge alleged that the government is functioning undemocratically and against the Constitution and giving sermons to the Opposition.

"We want Parliament to function smoothly, but the government is forcing us to resort to disruptions against the illegal suspension of the 12 Opposition MPs of the Rajya Sabha, which is against the Constitution and against the rules.

"The BJP government does not want us to raise issues of public importance and expose it, be it the issues of price rise, Pegasus (snooping row), the Nagaland violence, the petrol and diesel prices for farmers," he told reporters.

"We are appealing to them again and again to revoke the suspensions, but the government is adamant and is asking us to apologise instead.

"What for should we apologise? Have we done anything against the rules or the Constitution? No, we have not. None of the suspended members has been named, none of them had torn any file or alighted the table," Kharge said.

The senior Congress leader also said the process of the suspensions was not in accordance with law or rules.

"All of us are ready to work together and raise issues of public importance. But the government is not giving us an opportunity to raise the issues," he said, adding that the Opposition members have decided to boycott the house proceedings and sit on a dharna in support of the suspended MPs.

"The government is functioning autocratically, undemocratically, illegally, against the Constitution and not as per democracy, and is instead giving us sermons. This is not fine and we condemn it," Kharge said.

Deputy Leader of the Congress in the Rajya Sabha Anand Sharma said, "It is the democracy, which is being derailed by the government deliberately to muzzle the Opposition."

He said the Opposition is keen to see Parliament function smoothly to raise issues of public importance and added that the circumstances that led to the unfortunate situation in the monsoon session must never be forgotten.

It was the government, which forced the situation, Sharma alleged.

He accused the government of crushing democracy and barricading Parliament.

"We are telling the government today in finality, stop this vilification of the Opposition, shed this arrogance and this attitude, find a way. It is the duty of the prime minister, the government to run the House. If they want to seek the cooperation of the Opposition, they must work for a consensus. But from day one, they have started on confrontation, which we condemn," Sharma said.

They were joined by other Opposition leaders, including Tiruchi Siva of the Dravida Munnetra Kazhagam (DMK) and Vandana Chavan of the Nationalist Congress Party (NCP).

The Opposition leaders later sat with the suspended Rajya Sabha members and raised slogans against the government.