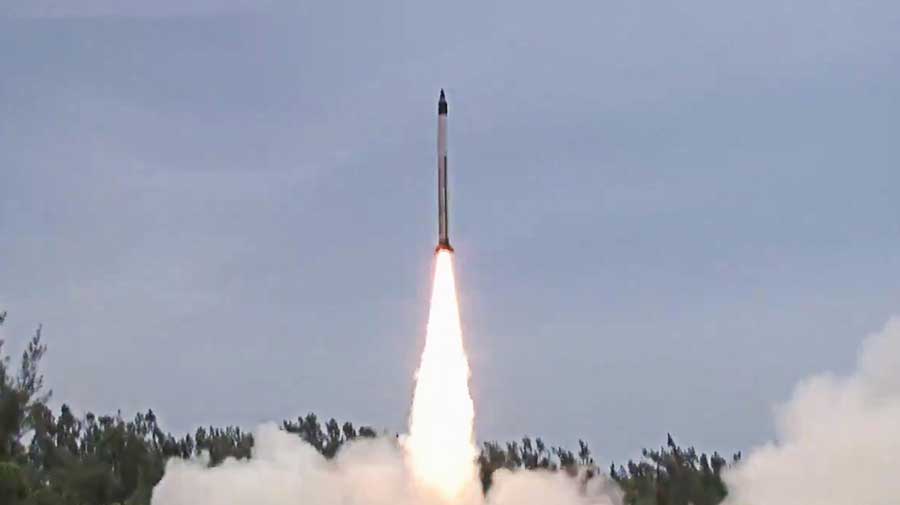 India’s defence research agency on Monday tested a flying vehicle that zipped at 2km per second, or six times the speed of sound, demonstrating an air-breathing engine envisioned for future civilian and military applications.

The hypersonic cruise vehicle launched on a proven rocket at 11.03am from Wheeler Island off the Odisha coast flew along an intended flight path over the Bay of Bengal at 2km per second for 20 seconds, the Defence Research and Development Organisation said.

“The engine performed in a textbook manner,” the DRDO said in a media release. The successful flight of the Hypersonic Technology Demonstrator Vehicle involved multiple critical technologies such as hypersonic manoeuvers, air-breathing propulsion and high temperature materials, among others.

Scientists not involved in the DRDO project but familiar with the technologies said hypersonic flying vehicles have potential applications in weapons-delivery systems such as missiles with extended range and in futuristic spaceplanes for low-cost satellite launches.

“With this success, all critical technologies are now established to progress to the next phase,” Union defence minister Rajnath Singh posted on Twitter after the test flight.

The DRDO had attempted a technology demonstrator flight in June last year but the test had failed as the launch rocket itself did not reach the desired altitude.

Scientists and engineers at the DRDO’s APJ Abdul Kalam launch complex on Wheeler Island launched the hypersonic cruise vehicle on a proven solid-fuelled rocket which ferried it to an altitude of 30km.

There, the cruise vehicle separated from the rocket, began to “breathe” air, activated onboard ignition and achieved sustained combustion — driven by oxygen from air and a reservoir of hydrocarbon fuel — to fly at six times the speed of sound for 20 seconds.

Hypersonic flying vehicles are delivery platforms capable of both manoeuvering and flying faster than five times the speed of sound, V. Siddhartha, a senior strategic technology analyst and former DRDO official had pointed out in a review of hypersonic platforms.

These two features — manoeuverability and speed — enable hypersonic missiles to penetrate most missile defences, compressing the timelines for a response by a nation under attack, Siddhartha had said in the review presented at the National Institute of Advanced Studies, Bangalore.

A key advantage of air-breathing engines is that they do not need to carry fuel and an oxidiser as do all conventional rockets. “The engine uses oxygen from the air inflight,” said Thangadurai Murugan, an aerospace engineer at the Central Mechanical Engineering Research Institute, Durgapur.

“This means a lower launch weight — a feature that can also be used to extend the range of missiles,” said Murugan, who is familiar with technologies required for hypersonic vehicles but is not involved in the DRDO project.

Scientists believe hypersonic vehicles could also find use in spaceplanes for which, Siddhartha said, conceptual studies have been under way in India for more than two decades. In 2005, the DRDO had requested a senior engineer Raghavan Gopalaswami to explore designs for a spaceplane.

The long-term goal would be a reusable spaceplane — a vehicle that can return for repeated launches — that would help lower the cost of launching satellites.

Those efforts had led to a proposal for the so-called “Avatar flight technology demonstrator”. In the review paper, Siddhartha points out: “The Russians improved on the concept and made it relevant for their hypersonic anti-shipping missile Zircon.”