Section 2(c)(i) of the Contempt of Courts Act, 1971, is unconstitutional and rooted in a colonial law that violates fundamental rights: Petitioners 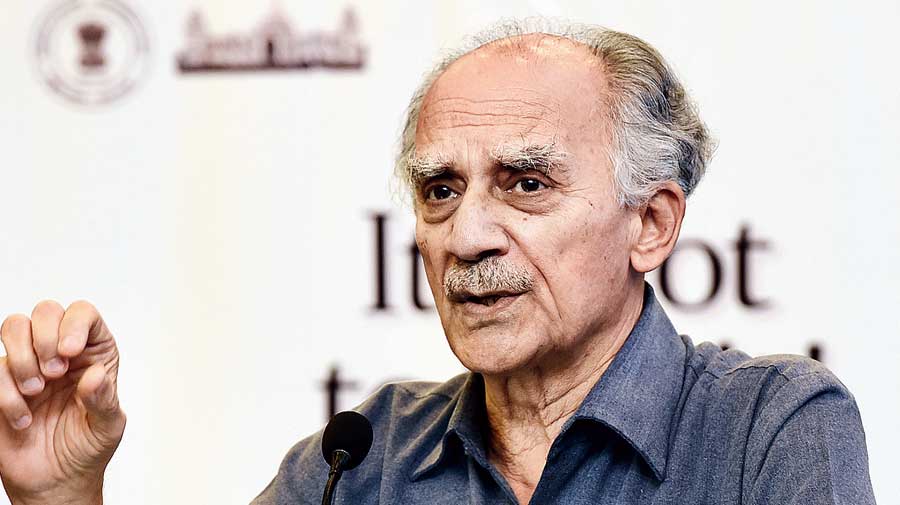 Arun Shourie, the crusading editor who became a minister in the Atal Bihari Vajpayee government, and two others have moved the Supreme Court seeking the quashing of a provision that criminalises contempt of court.

The petitioners said Section 2(c)(i) of the Contempt of Courts Act, 1971, was unconstitutional and rooted in a colonial law that violated the fundamental rights of free speech and equality.

The section defines what constitutes criminal contempt and lays down what "scandalises or tends to scandalise, or lowers or tends to lower" the authority of a court. The section invites a maximum punishment of six months in jail.

The two other petitioners are lawyer Prashant Bhushan, who is facing contempt proceedings for tweets on the judiciary, and journalist N. Ram.

“I feel all institutions must stand on their record and their work, not on their office or the fear which they can instil. It is on their moral authority that comes from their record,” Shourie told The Telegraph over the phone from Lavasa in Maharashtra on Saturday evening.

“Two laws have been used to instil fear, especially in the media. These are (laws against) sedition and contempt. These will harm the courts in the end. It certainly harms these governments, which use the law of sedition. It is an unconstitutional provision,” Shourie added.

He explained: “Today you can suppress the voice of criticism by saying this is seditious. The government persists in its wrongful conduct and in the end it harms both the government and the State of India…. Sedition was (speech or writing for) a violent overthrow of British rule. Now it is being used if I write about Adityanath or some other CM here or there, then they say it is sedition. It is not right. This is not a violent overthrow of India. It is a government elected by the people, therefore responsible to you and me and everybody else.”

Shourie added that he had to fight a contempt case filed against him by Subramanian Swamy, now a BJP MP, for 23 years, until the Supreme Court ruled in Shourie's favour. “That can have what the SC itself has called a chilling effect on the freedom of speech,” he added.

Section 2(c)(i) of the Contempt of Courts Act, 1971, defines criminal contempt as:

The civil form of contempt deals with wilful disobedience to any judgment, decree, direction, order, writ or other process of a court or wilful breach of an undertaking given to a court.

In their joint petition, Shourie, Ram and Bhushan have urged the Supreme Court to issue an appropriate writ, order or direction declaring Section 2(c)(i) as being violative of Articles 19 (freedom of speech) and 14 (equality) of the Constitution.

"The impugned sub-section is unconstitutional as it is incompatible with preambular values and basic features of the Constitution. It violates Article 19(1)(a), is unconstitutionally and incurably vague, and is manifestly arbitrary," stated the petition, filed through advocate Kamini Jaiswal.

It contended that the offence of "scandalising the court" cannot be considered to come under the category of "contempt of court" under Article 19(2), which deals with freedom of speech.

The petition underlined that the offence of "scandalising the court" was rooted in "colonial assumptions and objects that have no place in legal orders committed to democratic constitutionalism and the maintenance of an open robust public sphere".

According to the petition, the sub-section is vague, particularly the phrase "scandalises or tends to scandalise", which can invite subjective and greatly differing readings and application that is incapable of being certain and even-handed.

"Thus, the offence violates the Article 14 demands of equal treatment and non-arbitrariness," the petition said, referring to several cases.

Bhushan has filed a separate petition questioning the contempt proceedings initiated against him for the two tweets and the revival of a 2009 contempt case against him, which he said had been done with malice and without obtaining mandatory sanctions.

Bhushan has questioned the decision of the secretary-general of the Supreme Court, who is its highest administrative officer, to entertain a "defective contempt petition" on the administrative side and thereafter list it on the judicial side on July 22. Bhushan has dubbed this act unconstitutional, illegal and void.