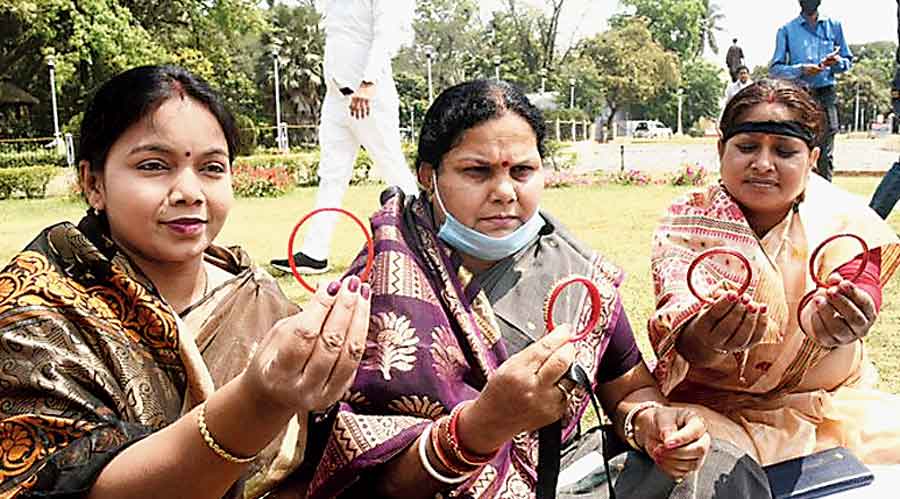 The move came in the wake of Opposition legislators being allegedly assaulted on Tuesday by the marshals and police personnel for vehemently and aggressively opposing the tabling and passage of the Bihar Special Armed Police Bill, 2021. Even women legislators were manhandled and dragged out of the House by the police.

The bill changes the name of Bihar Military Police to Bihar Special Armed Police and provides it the power to arrest people, as well as, conduct searches or raids without a warrant or the permission of a magistrate. The Opposition claimed the bill would turn Bihar into a police state.

Wednesday was the last day of the budget session of the Assembly. The session started on an ominous note with the legislators of the Rashtriya Janata Dal (RJD), the Congress, the Left parties, and All India Majlis-e-Ittehadul Muslimeen staying away from the proceedings.

They assembled in the open space outside the Assembly building and held their own proceedings in protest, elected legislator Bhudeo Chaudhary as their “Speaker”, condemned the abuse and assault on the MLAs, and sacked the chief minister over the incident.

Women Opposition legislators offered bangles to the chief minister over the unprecedented incident in which Speaker Vijay Kumar Sinha was allegedly held hostage in his chamber and had to call the police to remove the protesting MLAs. The police also dragged them out of the House.

The 243-member Assembly has 126 ruling NDA legislators. It has the support of an Independent and a Lok Janshakti Party MLA. The Opposition has 110 MLAs, while the AIMIM has five legislators. The government has a thin majority in the House.

“Chief minister Nitish and his puppet officers must know that no government is permanent. MLAs were abused and beaten inside the Assembly. They have set an unparliamentary trend. If the chief minister does not apologise for the incident, we may boycott the Assembly for the remaining tenure,” leader of the Opposition Tejashwi Prasad Yadav said.

Tejashwi, younger son of RJD chief Lalu Prasad, at present leads the party. “I will not forget the barbaric thrashing, abuse and misbehaviour of the MLAs, including the women legislators by Nitish Kumar and his pet officials. The chief minister will remember later on the shameful tradition he has started,” he said.

Tejashwi pointed out it was ironic that the bill was passed in the presence of the police after they thrashed and removed the Opposition legislators. He alleged that a day might come when the police might beat Nitish in his own residence under the powers provided in the bill.

“The senses of Nitish must have tingled with pleasure when the goondas were removing the saris of women legislators and putting their hands in their blouses. Filthy abuses were hurled at the women and they were dragged by their hair. Nirlajja (shameless) Kumar was enjoying dance and music in the night after the shameful incident,” Tejashwi said.

The RJD leader also asserted that the entire incident was orchestrated at the behest of Nitish and the entire country was condemning him.

Lalu, currently undergoing treatment in Delhi under incarceration after being convicted in fodder scam cases by the CBI court in Ranchi, called Nitish a “goonda of the Sangh (RSS).”

Congress leader Rahul Gandhi condemned the incident. “The shameful incident in the Bihar Vidhan Sabha has revealed that the chief minister is completely influenced by the RSS and the BJP. Those who have outraged the modesty of democracy have no right to be called the government. Yet the Opposition will keep raising its voice in public interest. We are not afraid,” he tweeted.

“ The attack on MLAs by armed police in the Bihar Assembly is a crime. The assault on the unemployed youth on the streets shows what the BJP thinks of the public after coming to power. It is condemnable. There has been a murderous attack on the democracy in Bihar. No more BJP. It believes in dictatorship instead of political mandate,” Akhilesh said.

Nitish said that all legislations, including the police bill, passed by the legislature are being sent to the governor for approval. He said what happened a day ago was unprecedented.

“What has happened in the House is unprecedented. Everybody has seen the behaviour of the Opposition legislators. It has not been good. They obstructed the functioning of the Assembly. If they had any doubt, they should have discussed it. The bill has provided all details. It has nothing about which rumours have been spread. Any action on the incident depends on the Speaker,” Nitish said.

The chief minister also said that calling the police to control the situation in the Assembly comes under the jurisdiction of the Speaker. He also pointed out that tables and chairs were broken in the House and a paperweight was thrown.

The chief minister also congratulated the NDA for electing JDU leader Maheshwar Hazari as deputy Speaker through voting. Hazari got 124 votes while the Opposition was not present in the House.