Veil off bondage and beatings but no action against perpetrators 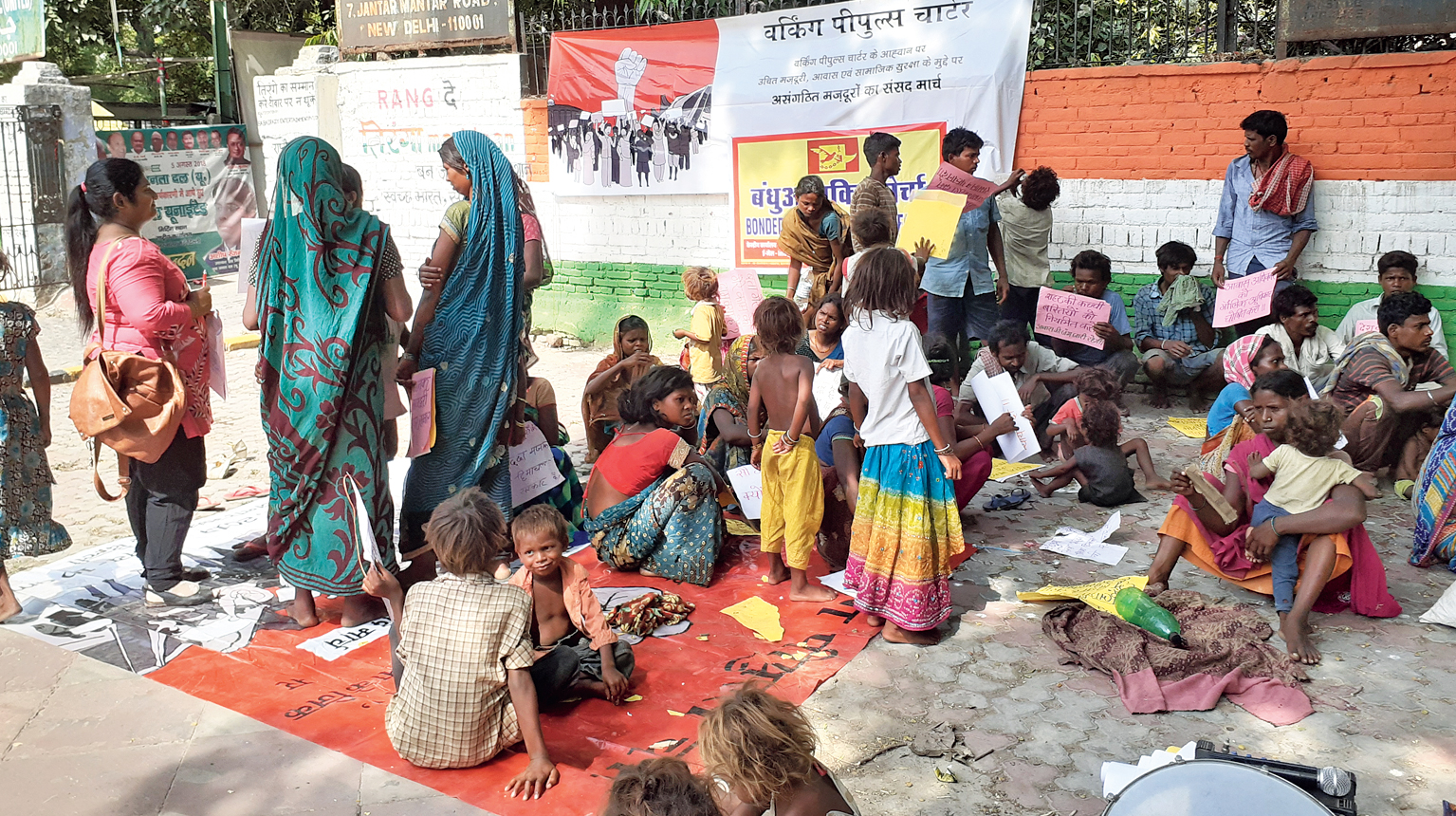 In the Book of Exodus, the second book of the Bible, Egypt’s Pharaoh is said to have ordered his Jewish slaves to make bricks without straw. Those who didn’t make enough were beaten.

Over 70 labourers from Bihar, including pregnant women and children as young as 12, have narrated a similar story of bondage for almost a year at a brick kiln in Haryana, where they were unpaid, poorly fed, beaten and forced to slave long hours.

Unlike biblical times, bonded labour is a criminal offence in India. Yet the Kurukshetra district administration has not issued any of the freed labourers with a release certificate under the Bonded Labour System (Abolition) Act, 1976.

Without the certificate, the labourers cannot claim compensation under the Central Sector Scheme for Rehabilitation of Bonded Labourer, 2016, which is Rs 1 lakh for adult males and Rs 2 lakh for women and children in addition to the unpaid wages. Nor can they claim any benefits under the welfare schemes meant for rescued bonded labourers.

Also, without the release certificate, the charge of bonded labour cannot be established against the kiln owners or labour contractors.

While the efforts of a union leader and a social activist led to these bonded labourers’ rescue on Friday evening from Diwana village, Kurukshetra police had not charged or arrested anyone till Monday night.

“When I asked the subdivisional magistrate of Pehowa (in Kurukshetra) for their release certificates and compensation, he initially said he would look into it,” activist Nirmal Gorana, whose complaint had led to the rescue, told The Telegraph.

“Later, he just awarded Rs 1,000 to each of the 21 families and said nothing more could be done and they should return to Bihar with the money. He said, ‘Khana bhi toh khilaya hai (They have been fed, haven’t they)?’”

The group included 23 men, 21 women and 40 children including a few babies. The youngest of those who were made to work, Ajay from Jagta village in Banka district, claimed he was 12 but looked no more than eight.

“We would make bricks all day and I usually got only gruel to eat. My parents and I would be beaten if we asked for anything. Sometimes we were beaten up for no reason. As I am small, they only hit me with their hands. The elders were beaten with sticks,” he said.

Many of the women now suffer from night-blindness because of malnutrition and the children have rashes. Three women gave birth under bondage.

“They would make us work even when we were pregnant. The overseers would threaten to kick my womb and kill my baby,” Ishtan Devi, who delivered a boy three months ago, said.

“Before the delivery they let us go to the government hospital. The doctors knew we were bonded labourers and did not charge us out of pity, saying, ‘We know your owner is a b******’.”

The freed labourers are now camped behind a historic bungalow on Jantar Mantar Road, Delhi’s protest plaza, where they began a dharna on Monday. The bungalow houses several offices, including those of the Janata Dal United and the Bandhua Mukti Morcha, an NGO that works with bonded labourers.

All the families are Musahar Dalits from Banka district who had migrated for work in western Indian brick kilns several times before. They are now surviving on the charitable langar offered by the Gurdwara Bangla Sahib nearby.

Ajay, who has passed Class II, is one of the most educated among the group. Their declared ages are their own estimates.

“The contractors Yugal and Abhishek Chauhan, who had taken us to Haryana, had promised us Rs 660 for every 1,000 bricks we made. After they left us there, we were only given food, before which they took away our Aadhaar cards,” said Poonam Devi, 25, who now suffers from night-blindness.

Normally, working eight hours a day, a labourer can make 500 bricks a day, she said, but at the kiln they were forced to produce 1,500 bricks daily, working gruelling hours.

“No money was given even for medicines, and they would beat us up if anyone wanted to see a doctor, or if they found us using a cellphone,” Poonam said.

One thousand bricks sell at around Rs 5,000 in Delhi, a three-hour drive from Kurukshetra.

Poonam, who came to Diwana with a month-old baby, had earlier worked in “much better conditions in Bhilwara” and was a member of the Rajasthan Pradesh Eent Bhatta Mazdoor Union there. She managed to call Madan Das Vaishnav, the union’s convener, last month with a mobile phone she had hidden.

Vaishnav told this newspaper over the phone: “Over the last 15 days I called the SP (superintendent of police) and the DSP’s office in Kurukshetra and they promised action. When nothing happened, I called Gorana in Delhi.”

He added: “In Rajasthan, too, many workers from Uttar Pradesh, Bihar, Jharkhand and Chhattisgarh end up as bonded labourers to repay moneylenders back home. We have rescued around 250 of them since 2013.”

Gorana, convener of the National Campaign Committee for Eradication of Bonded Labour, alerted the district authorities and was present during the rescue.

He said that each of the families had received Rs 10,000 to Rs 15,000 from the contractors in Bihar as an initial payment, and nothing after that.

“They could only identify their employers as ‘Jinku’ and ‘Subhash’, and the marker on the bricks too said, ‘Subhash’,” Gorana said.

“We learnt the unit is called Kamla Brick Kiln Operator and is owned by Jinku Gupta, son of Subhash Gupta. No one has been arrested. The overseers at the kiln said the labour suppliers (the Chauhans) had the labourers’ Aadhaar cards.”

The rescued labourers camped for the night at Kurukshetra railway station and arrived in Delhi on Saturday morning.

The subdivisional magistrate, Nirmal Nagar, did not respond to an email and a WhatsApp message from this newspaper.

Kurukshetra deputy commissioner S.S. Phulia did not respond, either, to an email, a call and a WhatsApp message.