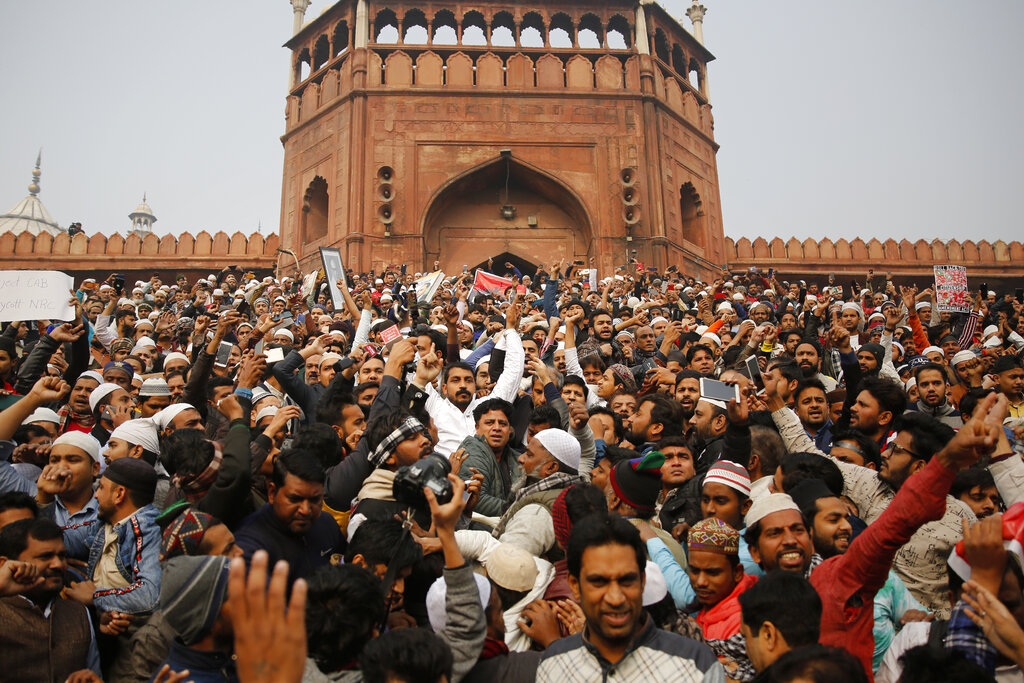 Standing near a statue of Babasaheb Ambedkar on the Chaudhary Charan Singh University campus in Meerut, Dalit activist Sushil Gautam had earlier this week burnt a copy of the Citizenship (Amendment) Act.

Gautam likened his act to the symbolic burning of the Manusmriti, the ancient Indian legal code, by the architect of India’s Constitution 92 years ago.

On Saturday, Gautam and other Dalit activists exhorted members of their communities to join the peaceful protests against the amended law, saying it represented an ideology that also threatened Dalits, tribals and other vulnerable people.

Gautam and his associates said Dalits should help intensify the nationwide campaign against the act, which promises non-Muslims in Afghanistan, Bangladesh and Pakistan a speedy pathway to Indian citizenship, and the National Register of Citizenship, an initiative to identify all non-citizens.

“The CAA views people through religion — we have to oppose this,” said Gautam, a member of Blue Panthers, an organisation he said campaigned for Dalit rights in Uttar Pradesh, Andhra Pradesh, Chhattisgarh and Madhya Pradesh.

The activists said their call for an intensified but peaceful campaign reflected their concern that a numerical advantage in Parliament could be exploited to also harm the interests of Dalits and other disadvantaged communities.

“The CAA should be seen as a move to replace Ambedkar’s philosophy, enshrined in the Constitution, with the political vision of the Manusmriti,” said Shubhanshu Singh, a postgraduate scholar at Jawaharlal Nehru University, New Delhi, who also addressed a news conference called by the Dalit activists.

Historical accounts describe a copy of the Manusmriti being burnt in the presence of Ambedkar on December 25, 1927. The Manusmriti, which some scholars say dates back to the 2nd or 3rd century AD, advocates discriminatory and prejudicial practices against women and untouchables.

The activists expect a Dalit-driven campaign to bolster the opposition to the CAA, now largely driven by students and youths. The 2011 census had estimated India’s Dalit population at around 16 per cent, or around 200 million. India’s Muslim population is around 172 million.

Chandrashekhar Azad, the head of the Bhim Army, a prominent Dalit group, had visited the Jama Masjid on Friday where he stood with a copy of the Indian Constitution. He surrendered to Delhi police early on Saturday.

“We have to stand alongside our Muslim brothers and sisters — what they’re trying to do with Muslims through the CAA, they could also do in future with the Dalits or other disadvantaged groups,” said Prashant Kanojia, a former journalist and Dalit activist.

The activists also condemned the police attacks on protesters, underlining that the police in Delhi, Karnataka and Uttar Pradesh — where police assaults have allegedly led to serious injuries or deaths — are controlled by the BJP.

“In Delhi, police have prevented many people from holding peaceful protest marches. In contrast, we only yesterday saw a crowd of pro-CAA marchers chanting inflammatory slogans in Delhi,” said Rama Naga, another JNU scholar.

A BJP worker had on Friday posted a video of a pro-CAA crowd on a Delhi street shouting: “Shoot the nation’s traitors.”

Gautam said the police had picked him up from his Meerut home on December 15, hours before a scheduled 2km torchlight march against the CAA. He was released on December 18.

Less than an hour after he and fellow activists had burnt copies of the CAA, Gautam said, the police arrived at his home again and took away his father. They released him on December 19. The same evening the police visited his home again, seeking his whereabouts.