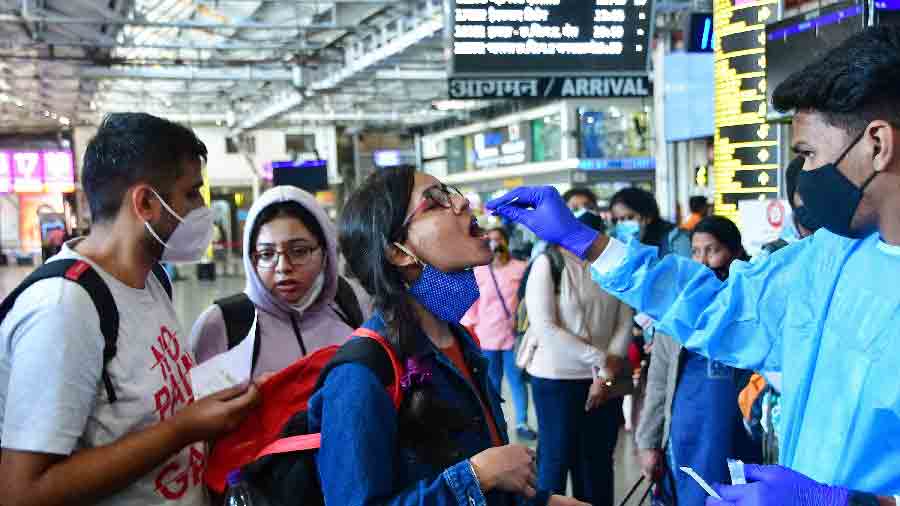 Health service director Bijay Mohapatra said: “The daily Covid cases in Odisha are likely to cross the second wave peak in the next few days. But the hospitalisation rate is quite low compared to last year. The general bed occupancy is 6.51 per cent and 12.51 per cent of ICU beds are filled.”

The All Indian Institute of Medical Science AIIMS (Bhubaneswar) experts also said that hospitalisation was less this time compared to past. The good news is that the hospitalisation of patients is quite less compared to last year. We have enough vacant beds to accommodate patients,” a senior AIIMS official told The Telegraph.

Incidentally, as many as 20 doctors and a number of medical staff of Veer Surendra Sai Institute of Medical Sciences and Research (VIMSAR) at Burla have been found Covid positive. Similarly, 30 students of Fakir Mohan Medical
College and Hospital in Balasore district have tested Covid positive.

With the number of cases rising, the entry of the public to the Bhubaneswar Municipal Corporation office was
restricted on Thursday after 22 of its employees tested positive.

With the caseload increasing every day, the state government has banned the celebration of Makar Sankranti and Pongal on Friday.

“The restriction has been imposed to avoid congregations of the people at the river bank, ghats, ponds, sea shore and near other water bodies for bathing on the occasion of Makar Sankranti and Pongal. People can celebrate Makar Sankranti in their respective houses,” said the office of the Special Relief Commissioner (SRC).

All the temples across the state will remain closed on Friday to avoid the congregation of devotees. As Makar Sankranti is one of the biggest festivals in southern Odisha, the district collector has banned the entry of the public to the sea beaches.

“In order to avoid large gatherings during the upcoming festivals and to ensure Covid-19 protocol, all sea beaches in Ganjam such as Gopalpur, Sonapur and other major water bodies shall remain closed for the public from January 13-17, 2022,” tweeted Ganjam collector.

What would remain a major challenge for the Odisha government is the upcoming five-phase panchayat election that would start from February 16.