In the left party's desire to defeat the BJP, it was Trinamul, not the combination of the Left Front, Congress and the Indian Secular Front, that benefited in the Assembly polls 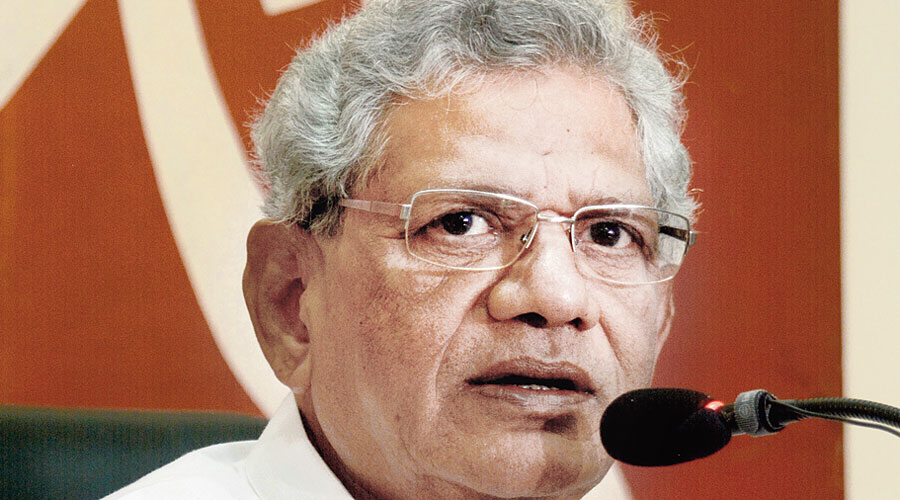 The practice of treating the BJP and the Trinamul Congress as two sides of the same coin cost the CPM dear, the Left party’s central committee has concluded during a three-day brainstorming session to analyse its worst performance ever in the Bengal Assembly elections.

CPM general secretary Sitaram Yechury told reporters after the meeting that although the party line from the beginning in Bengal and the rest of the nation had been that the principal political adversary was the BJP, in practice the BJP and Trinamul were treated equally in many places.

“That we said was wrong. That was not the party’s understanding. These are the things that need to be corrected,” Yechury said.

On the Bengal results, Yechury said: “The salutary factor has been the defeat of the BJP despite its high-profile campaign and determined bid to capture the state. The people of Bengal rose as one to defeat the communal forces and Hindutva as an ideology that was seen to be imposed on Bengal and its culture. This is a salutary factor.”

But in that desire to defeat the BJP, it was Trinamul, not the combination of the Left Front, Congress and the Indian Secular Front, that benefited.

Yechury said: “This combination was not seen as a viable option to defeat the BJP. And, in that polarisation, we got squeezed out. As far as the party is concerned, for the CPIM, it’s been a very disastrous result. For the first time since 1946, no communist has been elected to the Assembly in Bengal....

“We have, therefore, in a very serious, self-critical introspection, examined the reasons why this has happened, identified the problems that exist and the organisational weaknesses that need to be corrected.”

The lessons drawn by the CPM’s central committee will be taken up by the state committee, which is scheduled to meet on August 12 and 13. Yechury will attend the meeting.

A central committee member told The Telegraph the CPM had also failed to see that Bengal chief minister Mamata Banerjee had succeeded in addressing the anti-incumbency factor that had helped the BJP gain seats in the 2019 Lok Sabha polls.

“She (Mamata) took corrective measures. The party failed to see that the welfare programmes she took up after 2019 benefited some people. Not only did we ignore it, we dismissed these measures as ‘dole politics’. In the CC, the opinion was that it was wrong to call it dole politics when the Left is in favour of welfare programmes,” the central committee member said.

Asked if the CPM would continue its alliance with the ISF, Yechury said: “In all future elections, to maximise the pooling of all anti-BJP and anti-TMC votes, we will align with all secular forces. That’s the decision of the CC.”

However, a central committee member said that internally, there was acknowledgement that while the ISF was a secular force, the party had failed to communicate its secular credentials, allowing its detractors to project it as a “Muslim party”.

“The ground for the alliance should have been prepared better. The tie-up with the ISF was sprung upon the people at a rally, and the narrative spun by our rivals prevailed. We failed to communicate the fact that while the ISF president may be a Muslim, its general secretary is a Hindu and so were 40 per cent of its candidates.”

As for the organisational problems, sources stressed that the CPM had lost the most to Trinamul’s violence against its opponents.

“As many as 780 of our leaders have been killed, 1.3 lakh of our local leaders have been forced out of their areas of influence and another lakh have been implicated in false cases. The party has tried to help out many of them but not enough was done, leaving the cadres disillusioned. This hollowed us out,” a source said.

Further, because of the violence, the party workers could not be among the people. “Communists live with the people -- like fish and water. The disconnect hurt us badly. It was a case of ‘out of sight, out of mind’. And we have seen the Left vote getting eroded in every election since 2008 as a result. We failed to check this erosion,” the CPM source said.

CPM does U-turn on 'Beejemul'