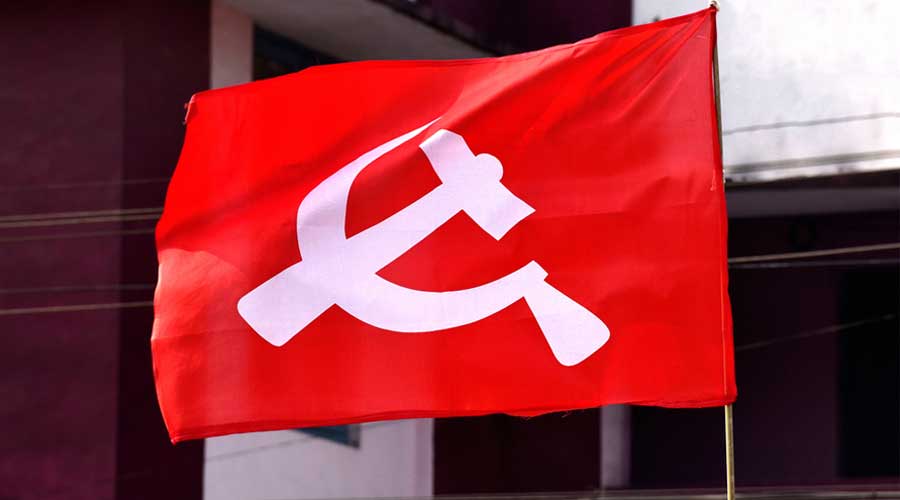 The ideologues in Alimuddin Street have prepared a discussion note that draws a clear distinction between Trinamul and the BJP
File picture
Devadeep Purohit   |   Published 05.08.21, 01:59 AM

The CPM has acknowledged there’s no hobgoblin called “Beejemul” and that the Trinamul-BJP battle is “not a got-up game”, doing a somersault that may not fetch an Olympic medal but will please those who want the Left to identify the BJP as the main enemy.

The ideologues in Alimuddin Street have prepared a discussion note that draws a clear distinction between Trinamul and the BJP. While not calling it a historic blunder, the Bengal CPM has said the stress on the fictitious “Beejemul” — a term that sought to club the BJP and Trinamul as one entity — created confusion ahead of the Bengal polls.

The CPM’s note has been sent to the district units as well as the headquarters in Delhi and various state CPM offices. The note is to be discussed on August 5, the birth anniversary of Muzaffar Ahmad, one of the founders of the Indian communist movement.

“Some slogans regarding the party’s position on the BJP and Trinamul have created confusion. The party’s understanding is, the BJP is in no way similar to any other political party, because the BJP is run by the fascist RSS,” the three-page note says.

“The use of slogans like ‘Beejemul’ and assertions that the BJP and Trinamul were two sides of the same coin created confusion during the time of the election. The 2019 Lok Sabha elections made it clear that the fight between the two parties (the BJP and Trinamul) is not a got-up game.”

Titled “Post-election situation and our work”, the note covers several subjects such as the slide in the party’s support base, Trinamul’s success in defeating anti-incumbency with initiatives like Duare Sarkar (government at the doorstep) and Didike Bolo (Tell Didi), and the need to develop a strong organisation up to the booth level.

The big surprise — the paragraph that distinguishes Trinamul from the BJP — comes on the second page. This understanding had eluded the CPM before the Assembly elections, where it drew a blank.

“All the political lines we have been adopting since 2006 have been proved wrong — it was no different this time,” said a CPM old-timer who did not wish to be named.

The CPM’s 2021 poll campaign had begun with a tall claim — “Amrai bikolpo, amrai dharmoniropekkho, amrai bhobishyot (We are the lone alternative; we alone are secular; we are the future)” — at the February 28 rally of the Sanjyukta Morcha, a fledgling alliance of the CPM-led Left Front, Congress and the Indian Secular Front, on the Brigade Parade Grounds.

Thereafter, CPM leaders travelled across the state equating the BJP and Trinamul and insisting that both needed to be defeated.

When CPIML Liberation general secretary Dipankar Bhattacharya argued the Left Front and the Congress should identify the BJP as “political enemy number one” and desist from clubbing it with Trinamul, CPM leaders like Biman Bose had swatted the suggestion away.

CPM general secretary Sitaram Yechury had gone further to say that siding with Trinamul would hand the entire anti-incumbency vote to the BJP. So, the campaign was built around assertions of a “Didi-Modi understanding”.

Although the note claims there was no confusion in the party’s own mind over the differences between the BJP and Trinamul, some Alimuddin insiders recalled the address delivered by state secretary Surjya Kanta Mishra at the 2018 state conference.

“Responding to the question why the party had struck an alliance with the Congress, the state secretary said in his report that the BJP and Trinamul were two sides of the same coin,” a CPM veteran said.

This clubbing of Trinamul and the BJP was a feature even of the CPM’s main campaign slogan for the 2019 Lok Sabha polls, which urged voters to defeat the BJP and stop Trinamul.

The slogan, believed to be the brainchild of Mishra and former chief minister Buddhadeb Bhattacharjee, had raised questions even within the party. The doubters had asked whether asking voters to stop Trinamul was the right strategy for the parliamentary polls, but the state leaders had ridden roughshod over all the objections.

“Politburo members like Prakash Karat and Manik Sarkar never shared this view and that’s why they were not welcome to campaign ahead of the Bengal Assembly polls,” a party source said.

“The party’s East Burdwan unit, which is not on the same page with Mishra, had invited Manikbabu on its own, which the state leaders didn’t like.”

The latest note has raised some comrades’ hopes of a rethink in Alimuddin about the approach to Trinamul, but some others are sceptical.

“This discussion note is full of contradictions…. While it admits that the party’s support base has dwindled over the years, it also makes silly claims, for instance, that the party has done better in 2021 compared with the 2019 Lok Sabha polls,” a party insider said.

“How can the state committee of a party that failed to win a single seat make such a claim?”

The source said the disclaimer on “Beejemul” owes to the CPM central leadership’s insistence at a time an Opposition platform centred on Trinamul and the Congress is shaping up in Delhi.

“The CPM would clearly like to be a part of that initiative and, probably, that’s the reason the Bengal unit is under pressure to formally distinguish between the BJP and Trinamul,” he said.

Besides, with party leaders in Kerala and Tripura having clearly spelt out that the BJP is the main enemy, the Bengal unit could not continue to be seen ploughing a lone furrow for too long.

“This, however, doesn’t mean the Bengal CPM will edge closer to Trinamul to take on the BJP. Under the current crop of leaders, who still want to settle scores with Mamata Banerjee over Singur, Nandigram and the 2011 defeat, that seems an impossibility,” another CPM source said.

One part of the note appears to lend credence to this apprehension.

“The BJP may have lost the (Assembly) polls, but we can’t afford to make the mistake of taking them lightly,” it says. “On the other hand, if the fight against the autocratic and corrupt Trinamul, which has come to power (for the) third time in a row, is weakened, it will benefit the BJP.”

Bengal: How deep is CPM’s debacle

CPM hopes for change in India, and within