Covid surge: Test must for Kumbh Mela returnees in Odisha

The government feels that unless tested and made to undergo mandatory 14-day isolation, pilgrims were likely to spread the virus 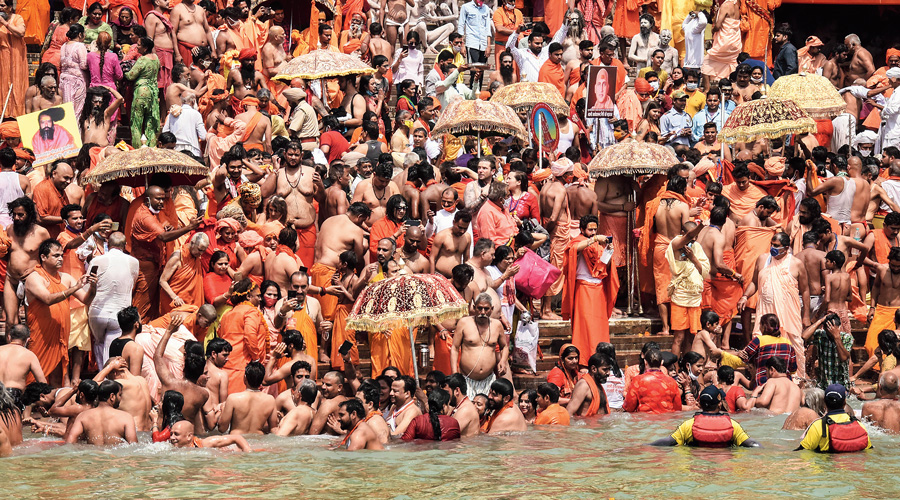 The Odisha government has asked the Kumbh returnees to get their RT-PCR test done before entering the state.
File picture
Subhashish Mohanty   |   Bhubaneswar   |   Published 20.04.21, 01:31 AM

The Odisha government has begun the process to trace people who have returned to the state after attending the Kumbh Mela in Haridwar, Uttarakhand.

Locating their whereabouts has become a challenge for the government, but making them undergo Covid-19 tests has become a must in a view of the prevailing situation in the state.

The government feels that unless tested and made to undergo mandatory 14-day isolation, the Kumbh returnees were likely to spread the virus in the areas where they are living.

Owing to the surge in Covid cases, chief minister Naveen Patnaik on Monday tweeted that his party, Biju Janata Dal (BJD) will not hold public rallies or campaign meetings in Pipili where a bypoll is scheduled to take place on May 13.

The by poll had been scheduled for April 17 but it got postponed after Congress candidate Ajit Mangaraj, 53, died of Covid on Wednesday.

“Every life is precious and I always consider people of Odisha as my family members. In this extremely serious Covid-19 situation, the BJD has decided not to hold any political rallies or campaign meetings for Pipili bypoll,”  Naveen said.

Terming the BJD as a responsible party that doesn’t want to put the lives of people in danger, Naveen tweeted: “We contest the elections to serve people. If the campaign has potential to endanger lives, I would certainly appeal to political parties to reconsider both the duration and method campaigning.”

BJD as a responsible party will not like to put the lives of people in danger. We contest elections to serve people. If the campaign has potential to endanger lives, I would earnestly appeal to political parties & @ECISVEEP to reconsider both the duration & method of campaigning.

The chief minister also said that India is a mature democracy and together its people should find a solution to the virus. Naveen’s tweet came at a point when the Leader of Opposition and senior BJP leader Pradeepta Naik has tested positive and has undergone self-isolation.

On the Kumbh Mela returnees, special relief commissioner (SRC) P.K. Jena told The Telegraph: “We have asked the district administrations to trace the people who had gone to the Kumba Mela. We are also in touch with the Uttarakhand government. We have made a 14-day quarantine mandatory for all those returning from the Mela.”

The state government has also asked these people to get their RT-PCR test done before entering the state.

Though, the state claimed that around 400 people of 150 families have attended the Mela, it still suspects more people might have gone there from Delhi and other cities and returned to Odisha.

“We have appealed to all the people to cooperate. We don’t want to take any risk at this point. Direction has been issued to collectors and municipal bodies to contact all these returnees and find out the location, travel plan and ensure that their RT-PCR test is done before boarding train or flights,” a senior official said.

The number of deaths in the state reached 1,948 with the death of another four persons. Odisha on Monday registered the highest ever spike of 4,445 cases.