Many of our corona warriors sacrificed their lives but the dedication of their co-workers remained unwavering: President 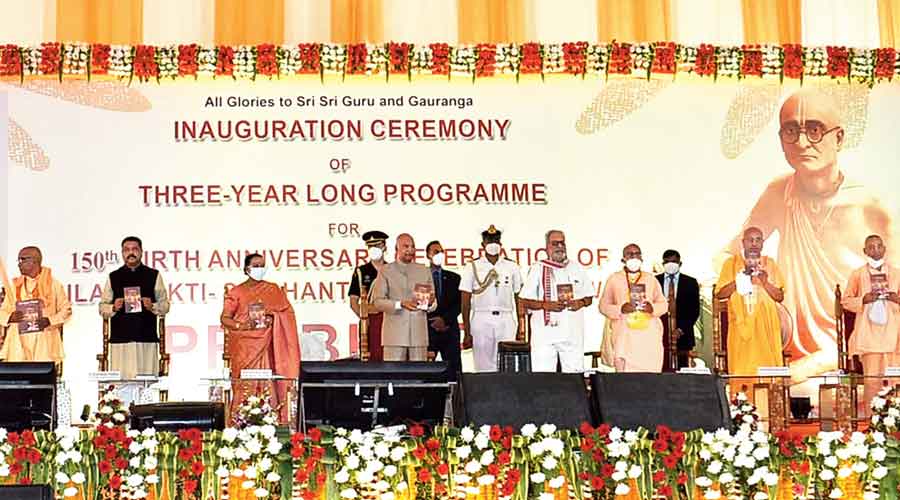 President Ram Nath Kovind on Sunday lauded the services of doctors, nurses and health workers in containing the magnitude of the coronavirus pandemic in the country and showing courage to fight against the pandemic.

“Our doctors, nurses and health workers displayed this spirit of service during the Covid pandemic. They were also infected with the coronavirus, but even in such extreme circumstances, they did not lose courage and were engaged in the treatment of people.

“Many of our corona warriors sacrificed their lives but the dedication of their co-workers remained unwavering. The whole country would always be indebted to such warriors,” said the President.

He was speaking on the occasion of inauguration of the three-year long celebrations of the 150th birth anniversary of Srimad Bhakti Siddhanta Saraswati Goswami Prabhupada, the founder of Gaudiya Math and Mission in Puri.

“Various religious traditions and practices are prevalent in different parts of our country. But there is only one belief and that is to work for the welfare of all considering the entire humanity as one family,” said President.

“God is worshipped in all its forms. But the tradition of worshiping God with Bhakti-Bhav (devotion) has been significant in India. Here many great saints have practiced selfless worship.

“Even among such great saints, Sri Chaitanya Mahaprabhu has a special place. Inspired by his extraordinary devotion, a large number of people chose the path of bhakti,” the President said.

The President said that Sri Chaitanya Mahaprabhu used to say that people should remember God with a humble attitude considering themselves to be smaller than grass.

“One must be more tolerant than a tree, devoid of any sense of ego and must give respect to others. One should always be remembering God,” said Kovind.

The President said that Sri Chaitanya Mahaprabhu’s constant love for God and his drive to connect the society with the thread of equality gives him a unique reputation in Indian culture and history.

“Saints of Bhakti-Marg were above the prevailing discrimination of that time based on religion, caste, gender and rituals.

“Therefore, people of all classes were not only inspired by them but also took refuge in this path. Guru Nanak Dev ji tried to build an egalitarian society while walking on the Bhakti-Marg,” the president said.

The PIB in a press release said that the President in his speech said that the Bhakti-Marg’s speciality of complete devotion to the God is witnessed not only in the spiritual side of life but also in the day to day life too of every individual. Serving the needy has been given a top priority in our culture.

The President said that apart from Sri Chaitanya Mahaprabhu, other great personalities of Bhakti movement too, strengthen the unity in our cultural diversity. The saints of the Bhakti community did not contradict each other in their teachings, but were often inspired by each other’s writings.

“Swami Vivekananda, while presenting the spiritual message of India to the world community in his speech in 1893 in Chicago, said that just as the rivers originating from different places eventually join the sea, in the same way man chooses different paths of his own will, these paths may seem different, but in the end all reach God. This principle of India’s spiritual unity was propagated by Ramakrishna Paramhansa and Swami Vivekananda which was also adopted by the Father of the Nation, Mahatma Gandhi,” said Kovind.