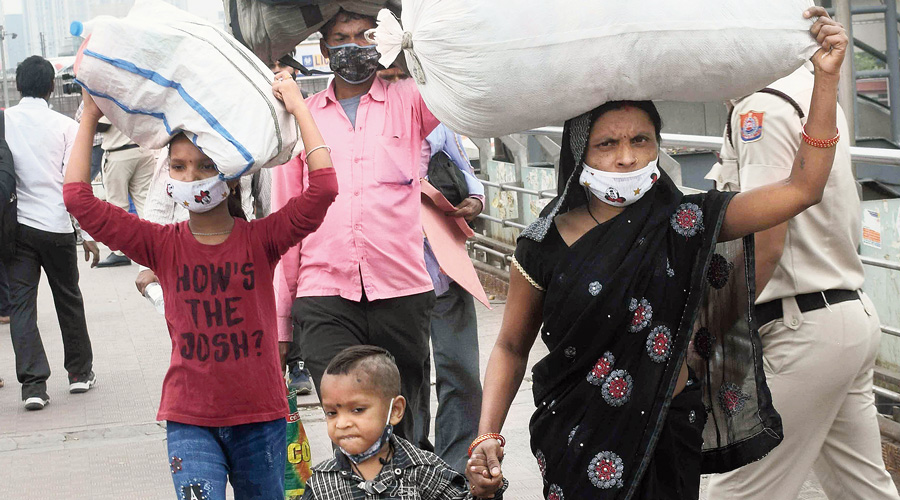 Migrant worker Bibhuti Khatua has mostly been confined to his one-room dwelling in Kotla Mubarakpur here with his ailing wife since Saturday.

After the weekend lockdown, the plumber in his mid-40s had on Monday reported for work at the construction site where he is employed. But the state government then announced a total lockdown from Tuesday morning till the next Monday morning.

For the next five days, therefore, Khatua will be dipping into his meagre savings of Rs 4,000 to meet his daily needs and buy medicines for his wife.

Returning to his village in Kendrapada, Odisha, will cost him his entire savings without offering hope of work back home. Staying back means surviving five days on the uncertain hope that the lockdown would be lifted on Monday and work will resume.

Khatua has chosen the second option but remains anxious. “I get worried when I think of next week. If the lockdown is extended, I’ll be in a mess. I shall possibly have to borrow money and return home,” he said.

His wife has been ill six months and regularly visits AIIMS, where her next date for consultations is August 31. The couple’s son is a BSc student at a college in Bhubaneswar.

Khatua said: “Even if I go home I have to come back in August. I’ll have to pay these four months’ rent for my lodgings, where I shall be leaving my belongings. That’s a costly affair too.”

He said that if the government provided some sort of help like subsidised rations, he could have stayed on longer.

The Centre claims to have implemented a “one nation one ration card” (ONOR) scheme since last year that allows migrant workers to obtain PDS food at their place of work.

“Last month I visited the ration shop here and requested the owner to enrol me. He said, ‘No’,” Khatua said.

“States should appeal to workers to stay wherever they are. In some days, they will get the vaccine,” Modi said, implying this would help a return to workplace normality.

However, with the Centre having put the onus on the states and the private sector to vaccinate those aged 18 to 45 — and amid a lack of clarity on the pricing of the doses and the volume of the supply — it’s unclear when the millions of migrants might get vaccinated.

While Khatua is undecided, thousands of his fellow migrant workers have already started leaving Delhi, nervous at the uncertainty and the looming spectre of joblessness and mindful of the miseries the community faced after the nationwide lockdown was announced last year.

The inter-state bus terminal and railway station in Anand Vihar were crowded on Tuesday with migrants looking for transport back home, as were railway stations in the various other big cities.

Among those who have decided to return home is Meraj Ansari, who works at a dress-making factory in Mumbai that has been shut 10 days.

With him will be returning five of his co-workers from their village in Giridih district, Jharkhand. All six share a single-room lodging in Wadala, paying a monthly rent of Rs 6,000.

“We are all going back tomorrow. What is bothering us is the lack of clarity on how many days the lockdown-like situation will continue,” Ansari said.

“There’s been no word from the factory when work might resume. Last year, we had suffered a lot without food; we don’t want to take that risk.”

Labour economists have for weeks been stressing the uncertainty in the labour market and urging the government to support the working class with food and rent wherever necessary, and provide more jobs under the Mahatma Gandhi National Rural Employment Guarantee Act (MGNREGA) and start a similar scheme for urban areas.

No state government has begun providing any relief or assistance yet to the migrants.

Labour economist Ravi Srivastava regretted that no comprehensive database of migrant workers had yet been created a year after the nationwide lockdown inflicted untold horrors on the community across the country.

The Centre and the states never implemented the Inter-State Migrant Workmen (Regulation of Employment and Conditions of Services) Act, 1979, which stipulated that all migrant workers be registered with the state labour departments.

The 1979 act has now been subsumed under the Occupational Safety, Health and Working Conditions Code, passed by Parliament last September, which mandates the creation of a database of unorganised-sector workers. However, the Centre is yet to notify the rules, so the efforts to create the database are yet to start.

Srivastava said that collecting data on each migrant worker’s home and workplace address would enable governments to arrange help during crises like the current one. “Without data on the identity of workers, aid cannot be ensured,” he said.

Srivastava said that many of the migrant workers had to borrow money last year, and the current crisis would further impoverish them.

“The government should provide free rations and give them some money through funds transfer, enhance the MGNREGA and start a job guarantee scheme in urban areas,” he said.

“Eventually the government should establish universal social security as an entitlement for all workers. There is an urgent need to improve healthcare facilities in urban areas.”

A labour ministry official said that the Labour Bureau, an arm of the ministry, had launched a survey last month to track the socio-economic conditions of migrant workers. The survey is to collect data on the migrant workers’ condition before the Covid outbreak, during the first peak of the outbreak, and now.

He said such data about migrant and other unorganised-sector workers could have been collected under the existing laws between August 2020 and March 2021, when the pandemic situation was better.

In his recently published book, Impact of Covid 19, Reforms and Poor Governance on Labour Rights, Sundar has highlighted the poor implementation of laws mandating social security and registration of workers.

“There is an immediate need to work out a database of workers and provide them assistance. It’s still possible to do it. The government can collate some data on migrant workers from its different schemes and services,” Sundar said.

The rural development ministry has data about the fresh job cards issued — mostly to returned migrant workers — under the rural job guarantee scheme last year, he said. The railways have data on the workers who returned home on the Shramik Special trains.

Since the food ministry claims that 65 crore of the eligible 81 crore people have been enrolled under the ONOR scheme, it should have data on how many had secured PDS rations outside their native places, Sundar suggested.

He said that funds should be diverted from non-essential projects like the Mumbai-Ahmedabad bullet train to provide welfare to the workers.

Last month, in a reply to Parliament, labour minister Santosh Gangwar had quoted data provided by the state governments to say that about 1.14 crore migrant workers had returned to their native places during last year’s lockdown.

Srivastava said this was “a huge underestimate” that highlighted the need for a comprehensive database.

“Nearly 10 to 12 crore workers migrate with their family members in search of work every year,” he said. Even if only half of them had returned home last year, the number would be far higher than 1.14 crore, he argued.

Last year, tens of thousands of migrant workers had attempted to walk hundreds of miles home during the lockdown in the absence of transport, and hundreds of them had died on the way.