India’s health ministry had until Thursday recorded 10,080 deaths in the state among a nationwide count of over 436,000 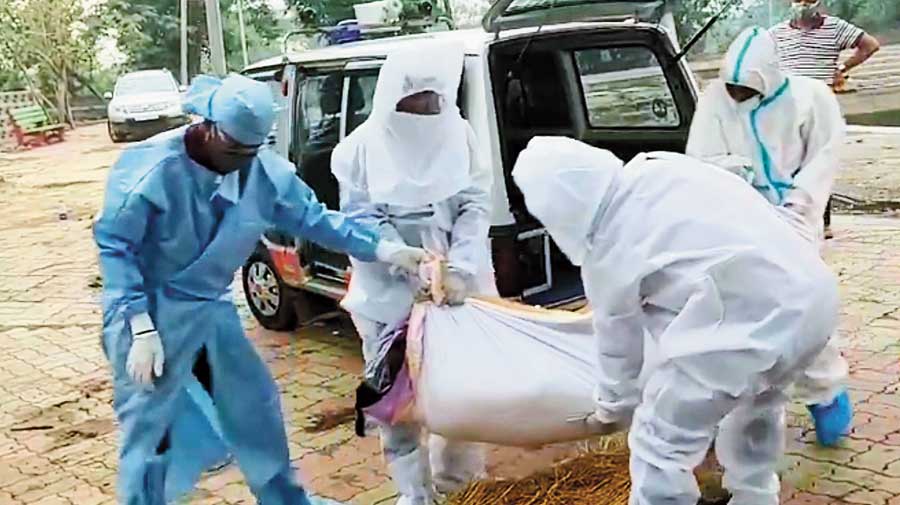 The excess mortality estimated for only 54 of Gujarat’s 162 municipalities exceeds the official Covid-19 death count for the entire state, researchers said in a study released on Thursday.

This is the highest percentage increase in deaths recorded in a single month anywhere in the world, a rise higher than Ecuador’s 411 per cent spike during April 2020 and Peru’s 345 per cent swell during April 2021.

The researchers, who used data from civil death registers, have also estimated that around 16,000 excess deaths occurred in the 54 municipalities between March 2020 and April 2021.

India’s health ministry, which relies on the states for Covid-19 mortality data, had until Thursday recorded 10,080 deaths in Gujarat among a nationwide count of over 436,000.

“The vast majority of these excess deaths likely represent direct deaths from Covid-19 in the absence of any other known catastrophe,” the researchers at the Harvard TC Chan School of Public Health, Harvard Medical School and the University of California, Berkeley, said in their study.

The new study represents the latest effort to estimate excess deaths during the Covid-19 epidemic in India amid contentions by some public health experts that the official death counts appear inconsistent with the body counts during April and May this year.

The health ministry has challenged the claims of large undercounting of deaths, asserting that while some deaths could have been missed, it has repeatedly asked the states and district authorities to conduct audits to report any missed deaths.

The Harvard-UCB researchers analysed civil register data from 54 Gujarat municipalities – across 24 of the state’s 33 districts --- taking the deaths between January 2019 and February 2020 as the baseline mortality data and comparing it to the deaths between March 2020 and April 2021.

The registers record a total of 44,568 deaths in the 54 municipalities since March 2020, with the sharpest increase in deaths during the second wave. This represents around 16,000 excess deaths compared with the baseline count between January 2019 and February 2020.

“The take-home here is that reliance on death certificates to count mortality from pandemics like this is not sufficient,” emergency medicine specialist Satchit Balsari, an assistant professor at Harvard Medical School and the study’s co-author, told The Telegraph.

The other co-authors are demographer Ayesha Mahmud from the UCB, researchers Rolando Acosta and Caroline Buckee from the Harvard School of Public Health, and Biraj Patnaik from the New Delhi-based National Foundation of India.

“Governments must look for alternative ways to better estimate mortality in the absence of a robust and nuanced death registration system,” Balsari said. “The high excess death estimate also warrants a closer look into who died, when and how, so we can mount appropriate and effective medical responses.”

The health ministry has consistently denied large undercounting of Covid-19 deaths. It has said excess mortality covers deaths from all causes and that attributing them to Covid-19 is “totally misleading”.

“We have to assume that the vast proportion of excess deaths were due to Covid-19 — there is no other explanation for such large increases as 4.8 times (compared with the same period in) the previous year,” the epidemiologist, who requested not to be named, told this newspaper.

“Some excess deaths may be explained through deaths of patients of other critical conditions such as heart attacks who could not get treatment in time because the hospitals were overwhelmed by Covid-19,” the epidemiologist said. “But such deaths cannot explain the observed excess.”

Last month, researchers at the Centre for Global Health Research, University of Toronto, Canada, had estimated on the basis of three data sources that India’s Covid-19 death counts might range between 2.7 million and 3.4 million, or at least six times the official count.

The former chief economic adviser to the Indian government, Arvind Subramanian, currently at Brown University in the US, and his colleagues too had last month estimated India’s excess deaths at 3.4 million, 4 million or 4.9 million, using three different methodologies.

The health ministry has, however, said India has “a robust system for recording Covid-19 deaths” and while some cases may remain undetected, “missing out on deaths is unlikely”.

A public health specialist said it was puzzling that the excess death estimates for India were primarily emerging from academic institutions outside the country.

“This is data entirely generated by our civil registration system,” the expert said. “Why aren’t Indian academic institutions analysing it?”