Raising a Twitter storm in favour of free universal vaccination, hundreds of leaders posted videos and messages highlighting the shortcomings in the inoculation drive 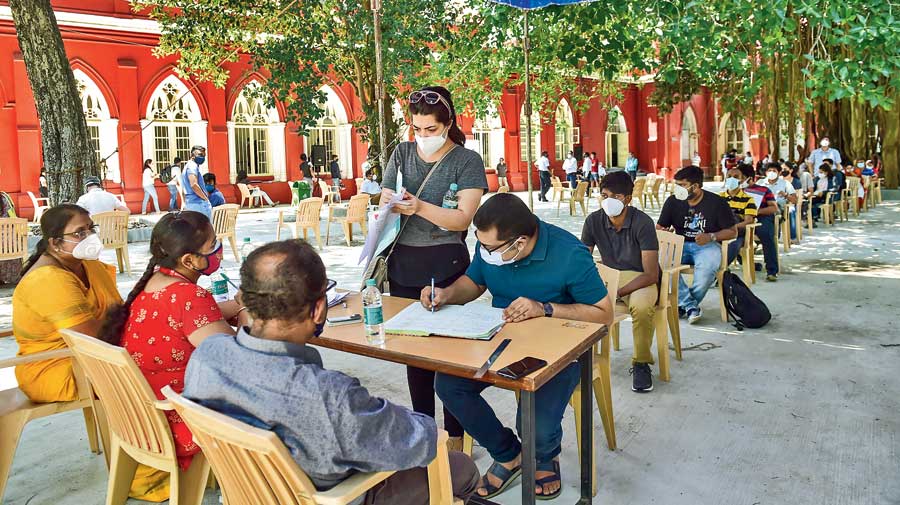 The Congress on Wednesday bombarded Prime Minister Narendra Modi with withering questions on vaccines, arguing that failure to plan in advance, a wrong approach and lack of vision had botched up the most critical exercise of fighting the pandemic.

Raising a Twitter storm in favour of free universal vaccination, hundreds of Congress leaders posted videos and messages highlighting the shortcomings in the inoculation drive.

The issues ranged from the failure to draw up a comprehensive plan to cover a significant section of the population within a reasonable time frame to placing orders for vaccines in time and the deficiencies in the modes of procurement and distribution. The majority of the Congress leaders insisted that it had been a saga of confusion and failures from the very start of the battle against the coronavirus.

Congress general secretary Priyanka Gandhi Vadra alleged that the Prime Minister had run away, abdicating his responsibilities as the crisis deepened during the second wave. “We are one of the biggest vaccine manufacturers in the world. Yet only 3.4% of our population is fully vaccinated. Who is responsible for India’s confused and dithering vaccination programme? #SpeakUpForFreeUniversalVaccination,” she tweeted.

We are one of the biggest vaccine manufacturers in the world. Yet only 3.4% of our population is fully vaccinated.

Who is responsible for India’s confused and dithering vaccination program?#SpeakUpForFreeUniversalVaccination pic.twitter.com/9JRgc1QSIo

Leader of the Opposition in the Rajya Sabha, Mallikarjun Kharge, wondered what happened to the comprehensive plan that Modi had talked about from the ramparts of the Red Fort on August 15, 2020.

Congress veteran from Uttar Pradesh Pramod Tewari said Modi had done nothing right — from delaying a ban on international flights when Covid cases had been rising across the world to planning the vaccination campaign.

Tewari insisted that villagers would not be able to take vaccines if they were not offered free, demanding that the Centre fund the entire exercise.

Young leader from Gujarat Hardik Patel pointed out that the Modi government was not realising that vaccinating every citizen was its duty. “(As much as) Rs 1,000 is being charged for one dose in Ahmedabad. This is not the time to make money,” Patel said.

Jharkhand health minister Banna Gupta asked the Prime Minister to spend a portion of the lakhs of crores his government had earned by taxing petroleum products on vaccinating the poor.

Congress spokesperson Supriya Shrinate said India was the only country where states had been made to negotiate with global firms. This proved to be a futile exercise as foreign vaccine manufacturers had refused to deal with the states as their policy allowed them to do business with sovereign governments only.

The RSS-BJP ecosystem had tried to blame the Opposition-ruled states for this policy, questionably tying it to the states’ demand for flexibility and decentralisation. Congress leaders, however, said no state had ever sought to directly deal with global firms and buy vaccines with their own money.

The Congress said the states had called for consultations with them, apart from flexibility and decentralisation in carrying out the vaccination drive. The leaders said the states were badly stressed for finances due to welfare measures during lockdowns and non-payment of GST dues by the Centre.

The Congress politicians argued that vaccination should be free of cost for the citizens. The states undertook the responsibility for free vaccination only after the Modi government asked them to share the burden for people in the 18-44 age group.

Shrinate alleged that this was a betrayal of citizens by the central government.

Another spokesperson, Ragini Nayak, said: “The RSS always talks of ‘Ek Vidhan-Ek Samidhan (One law-one Constitution). Why didn’t it speak for one-price for vaccines?”

Former Gujarat Congress president Arjun Modhwadia recalled how previous governments ran successful vaccination drives against 12 diseases, including small pox, tuberculosis and polio, which resulted in life expectancy rising from 35 to 70 and not even a paisa ever being charged from any citizen.

“Modi has introduced a new practice of charging the poor for vaccines. There are different rates — one for the Centre, one for states and one for private hospitals. This has hampered the vaccination drive,” Modhwadia said.

Many leaders expressed shock and outrage at the Centre’s decision to allow the two Indian manufacturers to sell vaccines to states at a higher price. They wondered why couldn’t the Centre procure all the vaccines and distribute them among states as they had a better-negotiated price.

Many leaders described this as abdication of responsibility and deliberately allowing the manufacturers to indulge in profiteering at a time of unprecedented humanitarian distress.

Youth Congress chief B.V. Srinivas wondered where from the private hospitals were getting vaccines when government facilities had to close down because of shortages.

He said: “The government has promised to the Supreme Court that the entire population will be vaccinated by December 2021…. The poor have no money to eat. Where from will they pay Rs 1,000 for vaccines? The government should ensure they get vaccinated without registration.”