Covid: 49% of population aged 60 years and above vaccinated

Out of an estimated 59.7 crore people in the age group of 18-44 years, 15 per cent have been vaccinated with the first dose 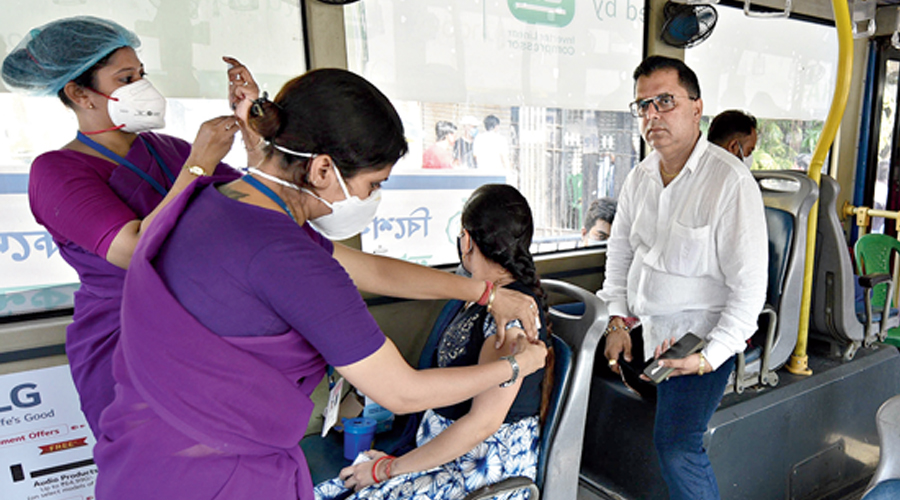 A marked increase in the pace of Covid-19 vaccination has been observed from June 21 with around 4.61 crore doses being administered in eight days, which is more than the population of Iraq (4.02 crore), Canada (3.77 crore), Saudi Arabia (3.48 crore) and Malaysia (3.23 crore), the government said on Tuesday.

On an average, 57.68 lakh doses of the vaccine were administered per day which is more than the population of Finland (55.41 lakh), Norway (54.21 lakh) and New Zealand (48.22 lakh), Joint Secretary in the Health Ministry Lav Agarwal said addressing a press conference.

The new revised guidelines of Covid-19 vaccination came into effect from June 21, according to which the Centre will now procure 75 per cent of the vaccines being produced by the manufacturers in the country.

Agarwal informed that 49 per cent of the population aged 60 years and above has been vaccinated with the first dose of Covid-19 vaccine. The government highlighted that the cumulative vaccine doses administered in the country has crossed 33.11 crore so far.

Out of an estimated 59.7 crore people in the age group of 18-44 years, 15 per cent have been vaccinated with the first dose of the vaccine, it said.

From May 1 to June 24, 56 per cent doses of the Covid-19 vaccine have been given in rural areas, while 44 per cent have been administered in urban areas, he said.

Of the total number of vaccinations so far, Aggarwal said 46 per cent women have been inoculated and 54 per cent men have received the jabs. A total of 54,693 other gender have also been given vaccines during the period, Agarwal said.

There are 20.9 crore people aged between 45-59 years, out of which 42 per cent have been vaccinated with the first dose of the Covid vaccine, Agarwal said.

A decline of almost 92 per cent has been noted in the daily Covid-19 cases since the highest reported peak on May 7.

India launched its Covid-19 vaccination drive on January 16 and has so far administered over 33.11 crore doses, while the UK which began the drive on December 8 has administered around 7.67 crore doses.

NITI Aayog Member (Health) Dr V K Paul said there is an improvement in the pandemic situation but stressed on maintaining caution.

"There are 111 districts where more than 100 daily cases are being reported and it is in our peninsula region -- Karnataka, Kerala, Tamil Nadu, Andhra Pradesh, Odisha and West Bengal. Concern in the face of an ongoing pandemic of this nature must continue to be on our minds...lowering of guard is not acceptable," he said.

"We would like to see increased proportion of women coming to vaccination booths for receiving the vaccine so that skew in gender can also get corrected," he added.

On vaccination of lactating mothers, he said all four Covid-19 vaccines presently approved in India are safe for them.

"They must take it and no specific precaution is needed and they should get vaccinated. This is scientifically valid and applicable to all the vaccines that have been licensed," he said.

"With full authority and science and research, I want to say there is no side effect of infertility associated with vaccines and it is rumour mongering and raising doubts so please don't believe them. There is no chance with any infertility, male or female, in relation to any licensed vaccine -- Covaxin, Covishield, Sputnik-V and Moderna," he said.

On a question why the death toll remains high, he said death rates were higher in the second wave as compared to the first wave.

"I have no doubt that the deaths are declining and are on a downswing and it is only a matter of time. It is essentially the lag due to which these are there, but some of the serious cases that prolonged from more intense phases are also adding up to this situation," he said.

On the Delta plus variant of Covid-19, he said scientific data on transmissibility, severity or vaccine efficacy against this variant is not available yet.

"It is being monitored and scientific action is being taken," he added.

On vaccination of pregnant women, Agarwal said NTAGI recommendation has come to the Health Ministry and it is being examined and it will be examined with other stakeholders too, and required orders based on that will be issued.