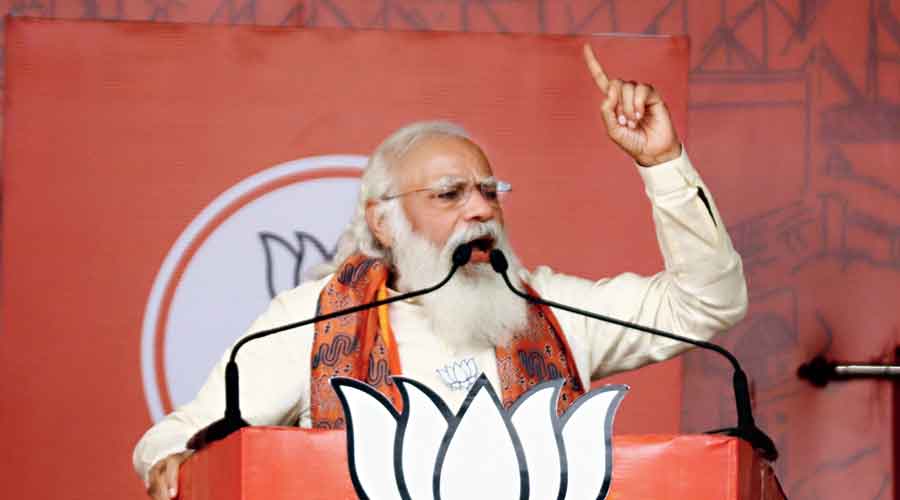 Prime Minister Narendra Modi on Sunday said the Covid outbreak was “testing our patience” and ability to “endure misery” but spoke not a word on the oxygen crisis that has claimed dozens of lives in the country.

Rather unusually, his monthly radio address, Mann Ki Baat, devoted most of its time to carrying Modi’s conversations with healthcare workers who appeared to play down the outbreak’s severity and the shortage of key medicines like remdesivir, and painted a rosy picture of good treatment and high recoveries.

Several high courts, including Delhi High Court, have over the past few days expressed concern at the poor Covid management by the central and state governments, and public health experts have blamed the crisis partly on the Centre’s lack of preparedness and planning.

“My dear countrymen, namaskar. Today, I’m expressing my mann ki baat at a time when the corona(virus) is testing our patience; it is testing to the limit (people’s ability to) endure misery,” Modi said.

He was silent on the cause of much of that misery: the Centre’s failure to provide enough oxygen to hospitals. At least 45 Covid patients died in Delhi on Friday and Saturday after their hospitals fell short of oxygen.

After Modi made a cursory reference to how the second “toofan” (storm) of the pandemic had “shaken the country”, the broadcast shifted to airing optimistic comments by doctors, nurses and other frontline workers that seemed aimed at glossing over the government’s lapses.

Apart from making the obvious point that people shouldn’t panic, these healthcare workers in their prerecorded conversations with Modi  largely portrayed the country’s health system as having risen to the challenge.

“This time, for emerging victorious in this battle, we have to accord priority to expert and scientific advice,” Modi said.

The programme then aired his conversation with a Mumbai doctor, Sashank Joshi, who said he was experienced in treating Covid patients.

“Dr Sashank, I would like you to tell people about the second wave. How different is it medically, what precautions are necessary?” Modi asked.

“Thank you, sir. This second deluge, which has come in rapidly, is fastermoving than the first wave,” the doctor replied. “But the good thing is that the recovery rate is higher and the mortality rate pretty low.”

Dr Sashank spoke out against people running after “expensive treatments”, referring by name to remdesivir, a key anti-Covid drug that happens to be in short supply. He urged people to rely on cheap medicines.

“Sir, I want to clarify that we have the world’s best treatment available. You will see that India has the best recovery rate. If you compare Europe, America, our patients are recovering through our treatment protocols,” the doctor said.

India’s recovery rate happens to be among the world’s best but experts have suggested this owes mainly to the country having a younger population compared to Western nations. Besides, there have been allegations of gross and deliberate underreporting of Covid deaths, which if true would artificially inflate the apparent recovery rate.

Modi also spoke to a Kashmiri doctor, Naveed Nazeer Shah, who too said the second wave was nothing to panic about and urged people to maintain Covid protocols and take the vaccine.


The Government of India is applying its entire might to give a fillip to the endeavours of the state governments. The state governments too are trying their best to fulfil their responsibilities.
- Prime Minister Narendra Modi


Unlike last year when he had dictated measures like a nationwide lockdown, Modi on Sunday appeared to leave the Covid battle to the states, much as his government has done in the matter of the vaccination of those aged 18 to 45.

The Modi administration’s attempts to lob the ball in the states’ court is being widely seen as a way of ensuring that the state governments, and not the Centre, face the fire for the suffering caused by the second wave of the epidemic.

BJP managers have been blaming the Opposition-ruled states even for the oxygen crisis at their hospitals, accusing them of mismanaging the distribution of the gas allotted by the Centre.

We are in a disaster-like situation: AIIMS doctor on Covid