Advertisement
Home / India / When and how to lift lockdown, Kerala has worked it out

When and how to lift lockdown, Kerala has worked it out

Alarmist numbers based on questionable data should not dictate future course, way forward is to zero in on hotspots, says Debroy 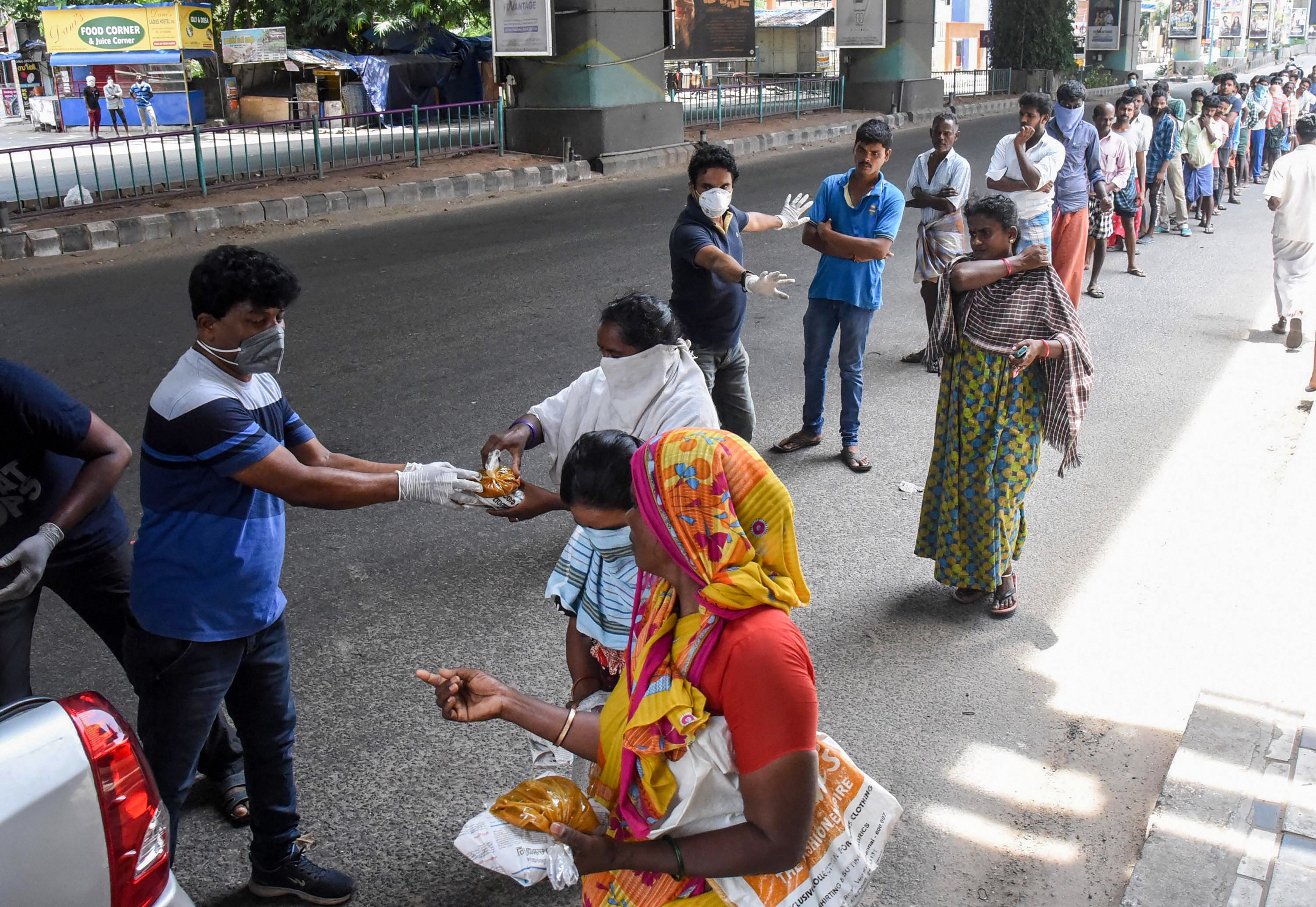 The Kerala government, which acted early and fast to control Covid-19, has already compiled a 36-page roadmap for exiting the lockdown which was released April 6. It’s called the Report of the Expert Committee on Strategy for Easing Lockdown Restrictions and offers a detailed strategy of how the lockdown could be lifted in three phases, district by district.

In the first phase, the report suggests, the restrictions could be relaxed if there has not been more than one case in the district in the week before the review is conducted.

To move to Phase II, there should not have been more than one new case of Covid-19 infection in a district in a fortnight and not more than a 5 per cent increase in the number of persons under home surveillance. To move to Phase III, there should be no new cases in a fortnight and an actual decrease of 5 per cent of the number of people under home surveillance.

“A slide into the community transmission stage is almost inevitable, at least in some parts. But that does not warrant a continuation of the current 21-day lockdown in the middle of the rabi harvesting season, with the informal sector, daily wage workers and MSME’s bearing the brunt of the lockdown,” argues Debroy, who believes that the economic cure should not be worse than the impact of the disease.

Debroy asserts that: “As a result of the epidemic, the same number of people may get infected, but over a longer period of time.”

He says he believes the current three-week lockdown has given authorities time to prepare to tackle the pandemic. “The time bought allows for possible development of herd immunity. It allows for supply (including domestic manufacture) of testing kits, personal protection equipment, ventilator machines, creation of testing centres and isolation beds.”

Debroy makes the point the road ahead shouldn’t be presented as a binary lock down or no lockdown question. Instead, he notes, India is a “large and heterogeneous” country and the pandemic is at different stages in different parts of the country.

Under the rules laid down in the Kerala report, in Phase III inter-state buses would be allowed to ply and essential workers would be allowed on domestic flights. However, aircraft would only be allowed to carry a 50 per cent seat load which would make it uneconomical for them to operate. International travel would only be allowed when total normalcy returns but special provisions would be worked out for non-resident Malayalees who are working abroad and returning to the state. This would include being quarantined. During this phase, schools and colleges could open but only for examinations.

Some Kerala districts might soon qualify for lifting the lockdown under these terms. In Thiruvananthapuram there have no cases for the last eight days and in Ernakulam there have been no cases for four days. The bulk of the state’s Covid-19 cases come from three districts, Kasargod, Kannur and Malappuram.

Debroy takes a different approach to returning to normalcy and suggests that governments must “zero in on hotspots at sub-district level, such as identified urban localities, including slums, where testing needs to be focused.”

He adds bluntly, “India is not a position to test the entire population.” He suggests in Delhi, for example, restrictions need to continue in areas like Nizamuddin and Dilshad Garden. He adds: “Everywhere else, economic activity needs to be revived.”

Debroy admits that cutting off hotspots could be difficult, but adds: “The attempt to differentially break the chain of transmission is not an argument for bearing disproportionately high economic costs.”

Still, even while India’s in a vastly different economic boat to the US, it may be worth reflecting on comments by Bill Gates in rebuffing proposals floated by leaders like Donald Trump for a quick end to lockdowns. “There really is no middle ground, and it’s very tough to say to people, ‘Hey, keep going to restaurants, go buy new houses, ignore that pile of bodies over in the corner. We want you to keep spending because there’s maybe a politician who thinks GDP growth is all that counts,” Gates said.

Reopening India’s economy requires careful and intelligent planning. There’s going to be no return to normal soon if wide swathes of the population start falling sick. As Debroy notes, the informal sector, daily wage workers and MSME’s are bearing the brunt of the lockdown. We must make every effort to make sure they and other vulnerable people don’t suffer the worst of Covid-19. That way lies chaos where India with its vast population might find itself overwhelmed and completely unable to care for its sick

The Centre and the state governments are grappling with the life-and-death question of how to lift the lockdown and restart economic activity in the coming weeks and months even though the number of covid-19 cases shows no real sign of decreasing.

Meanwhile, Kerala has become the first state to release a comprehensive plan document on how a lifting of the lockdown might be achieved.

Modi has been slow to reveal his views on the next steps forward but parliamentarians who held a video-meeting with him two days ago, said the Prime Minister was hinting at a lifting of the lockdown in several stages..

A strong indication about the government’s latest thinking can be gleaned from an article by Bibek Debroy, chairman, Economic Advisory Council to the Prime Minister, in Wednesday’s Economic Times. In it, Debroy questions predictions that up to 18 million could die if the pandemic sweeps India, unrestricted by counter-measures.

“Alarmist numbers based on questionable assumptions should not be used to prolong the lockdown, at least in its present form,” says Debroy. who points out that China had 81,865 Covid-19 cases and 3,335 deaths making for a case fatality rate of around 5 per cent . From that, Debroy extrapolates that even if India has 246,000 cases which would be three times as many as the Chinese, the death toll would be around 12,000.

It must be pointed out that while Beijing was slow responding to the virus, once it did, China, whose medical infrastructure is far more advanced than India's, engaged in widespread testing and clamped strict controls on Covid-19 hit areas. It’s not known what the death toll might have been had China not imposed its lockdowns. So using China’s numbers achieved under tight controls to project India’s covid-19 caseload and deaths without controls is like comparing apples and oranges.

In Italy, which was late to start imposing social distancing and lockdowns, even with its medical care system which is one of the most advanced in Europe, the Covid-19 fatality rate stands at 11 per cent. In Britain, the fatality rate is 8.2 per cent. At the other end of the spectrum is Germany which acted early to combat the virus, conducting widespread testing, treatment and containment and also has one of Europe’s best medical care system, the death rate is 1.0 percent In South Korea, which also was vigilant from an early stage, the death rate it is 1.7 per cent. 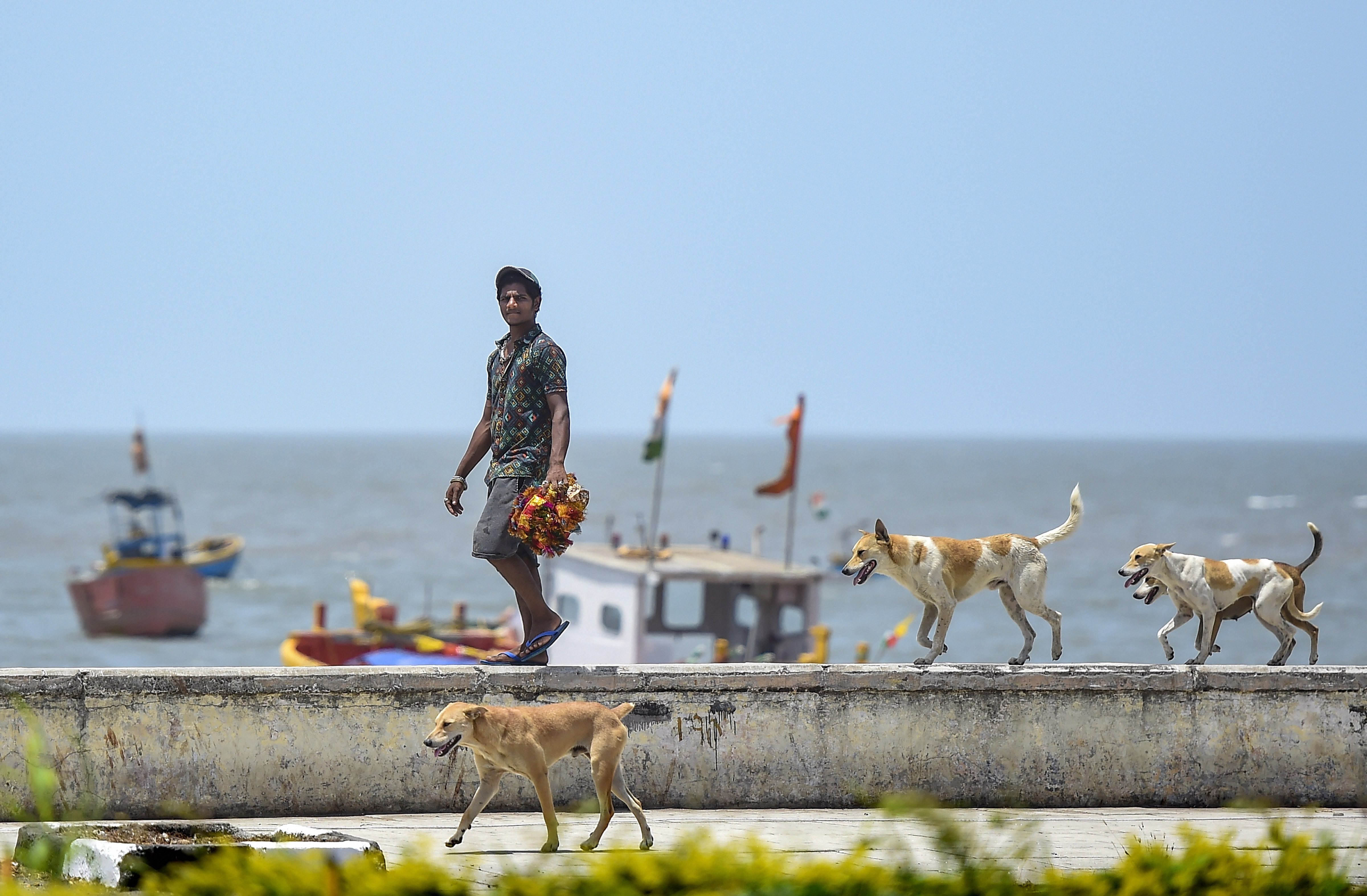 A man walks along a road during the nationwide lockdown, imposed in the wake of the coronavirus pandemic, at Worli in Mumbai, Thursday, April 9, 2020.
PTI 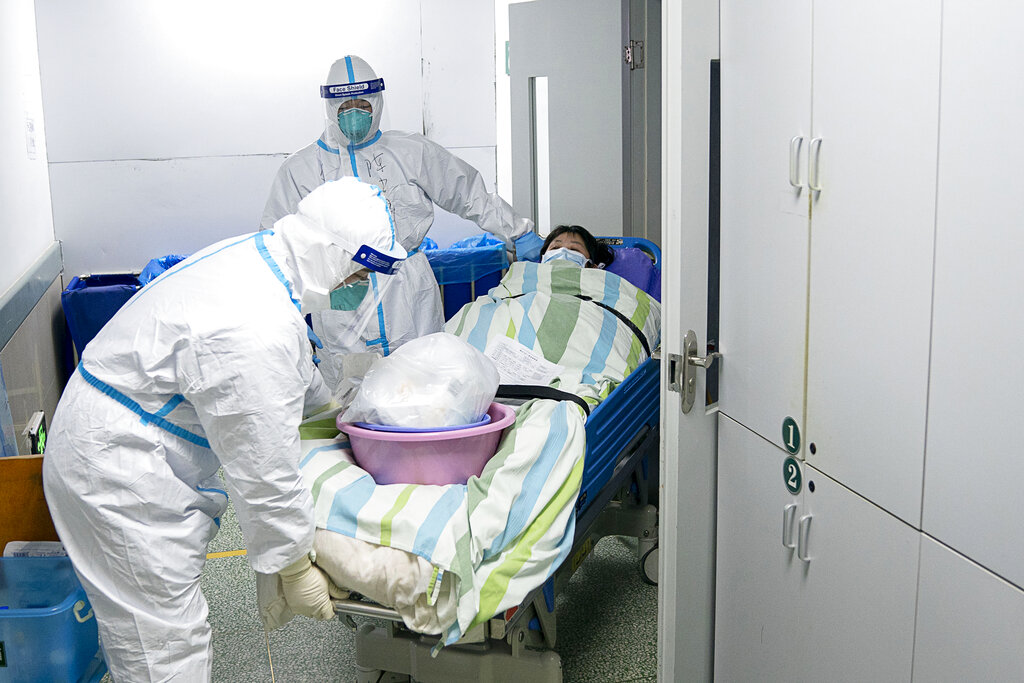 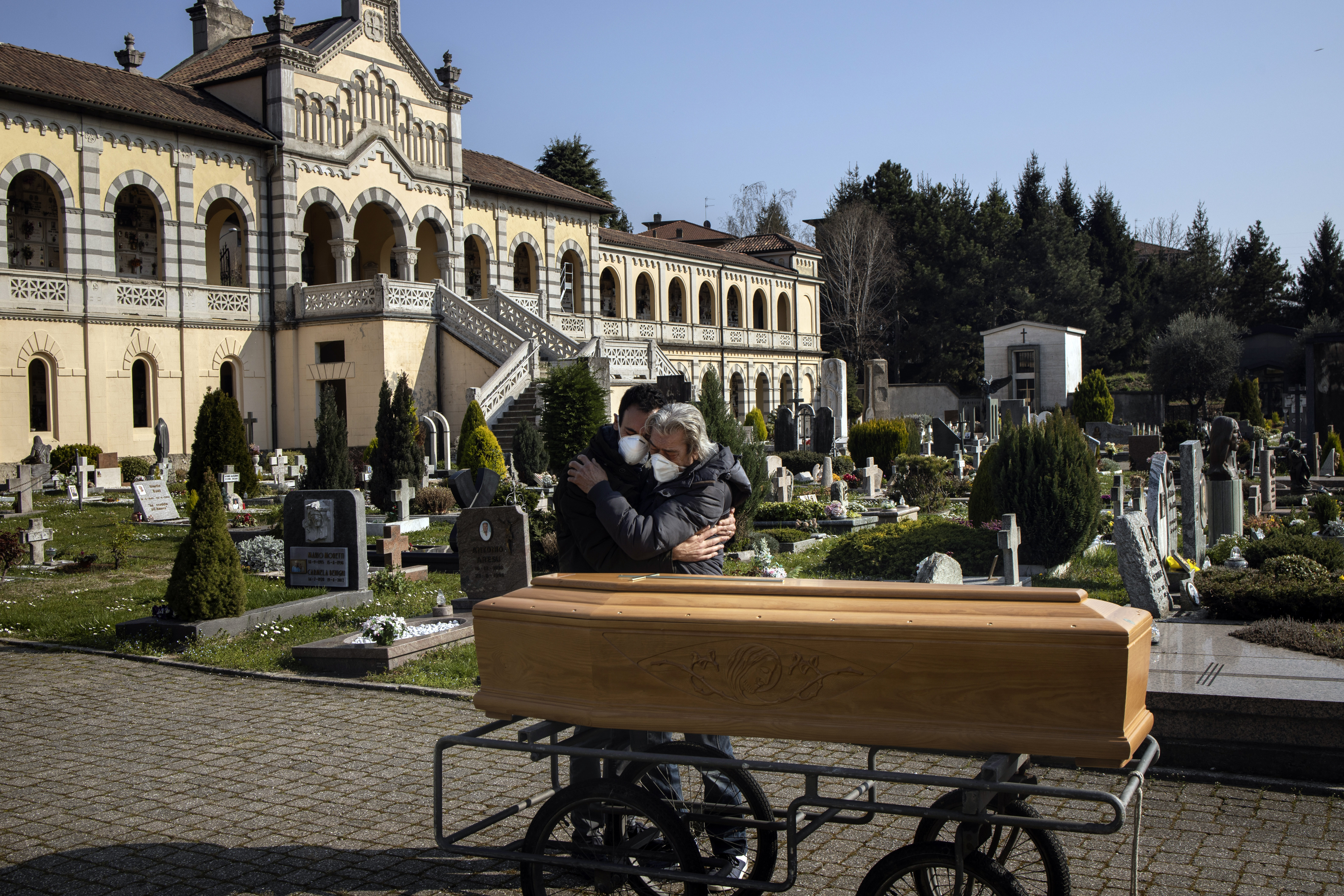 The husband and son of Teresina Gregis mourn after her funeral in Alzano Lombardo, Italy, March 21, 2020. Gregis, who had pre-existing heart and respiratory problems, died at home without being tested for the coronavirus.
(Fabio Bucciarelli/The New York Times). 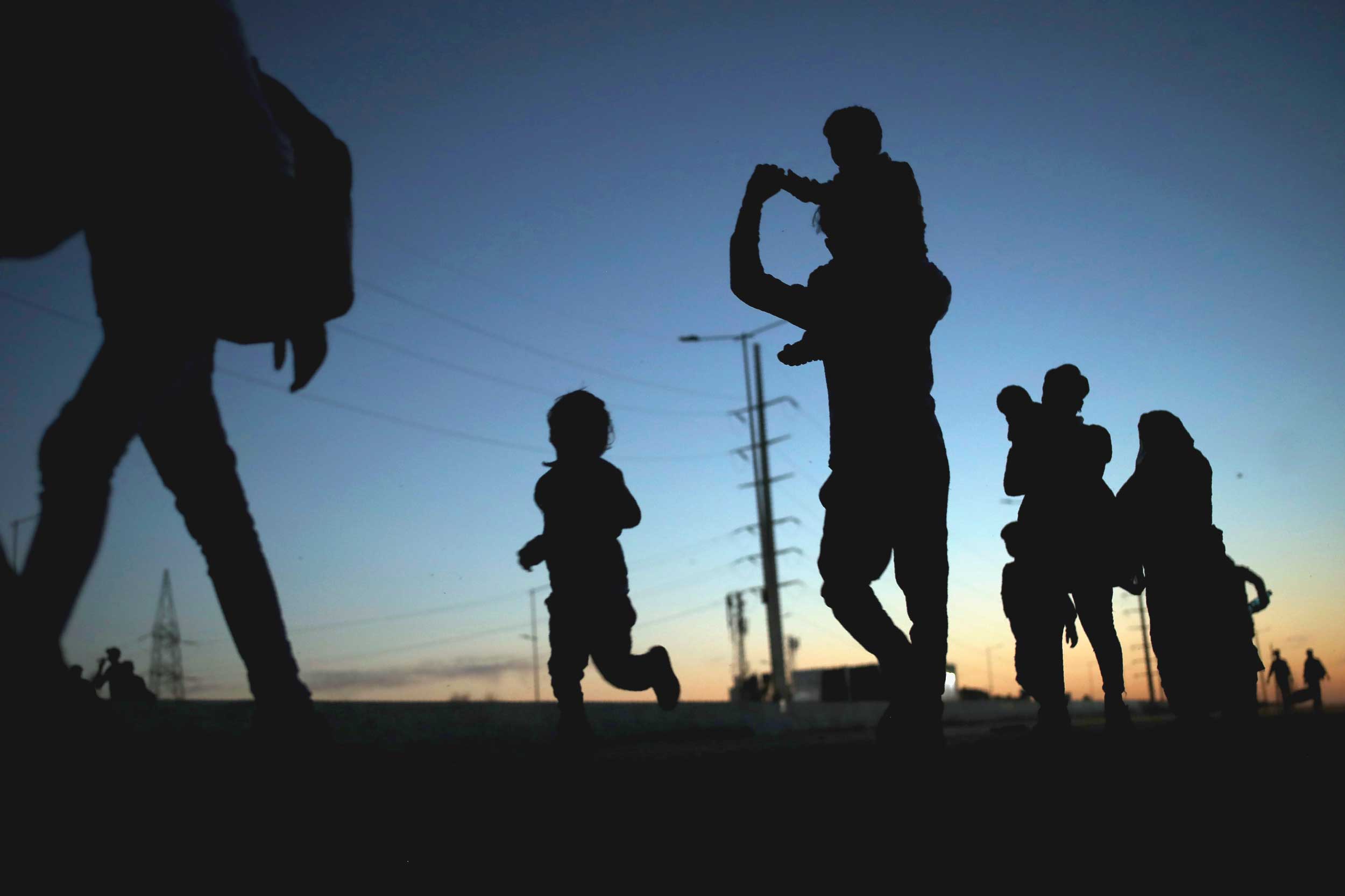 A migrant labourer's family members make journey to their village by foot, following a lockdown amid concern over spread of coronavirus in New Delhi, India.
(AP) 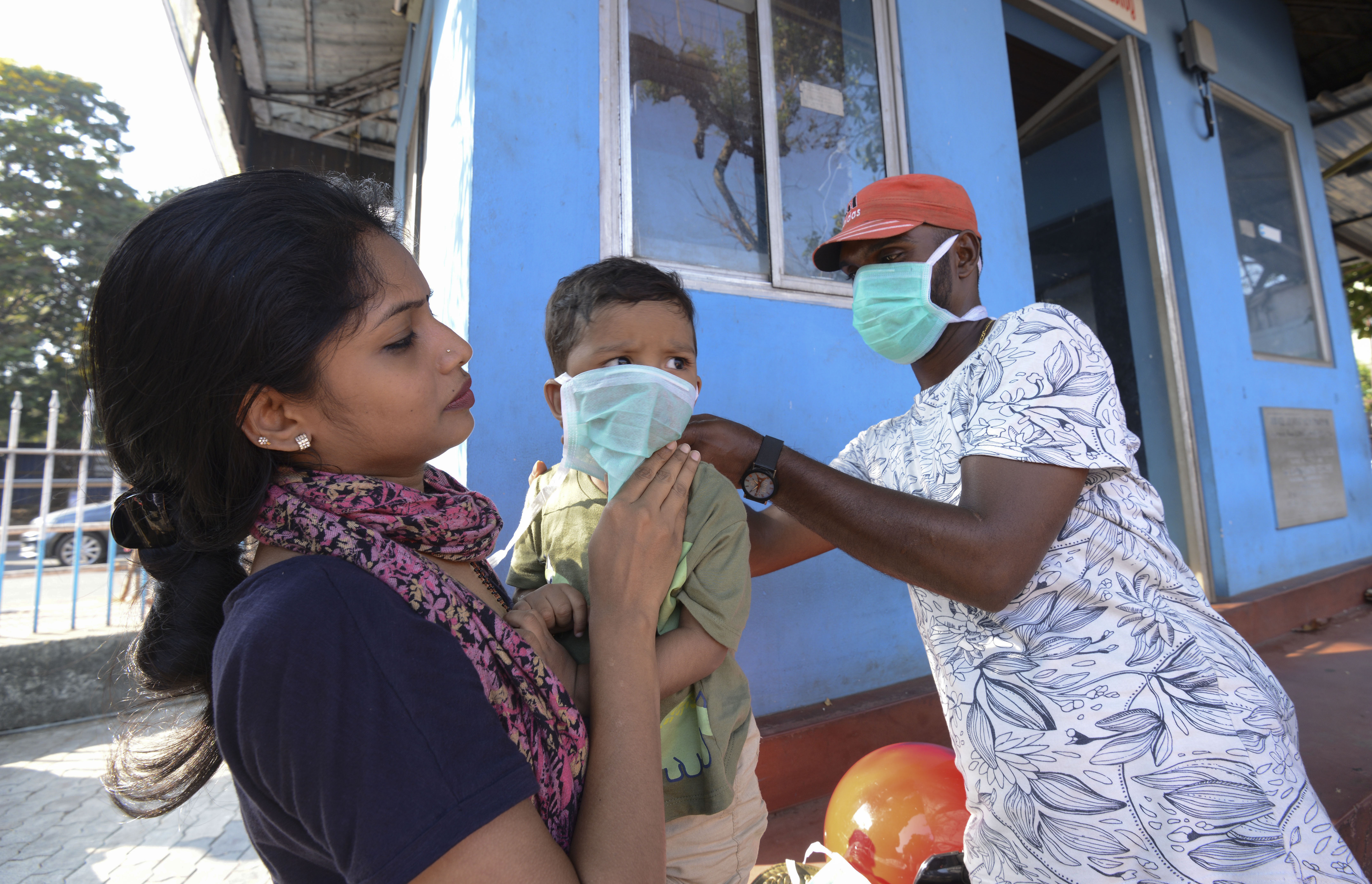