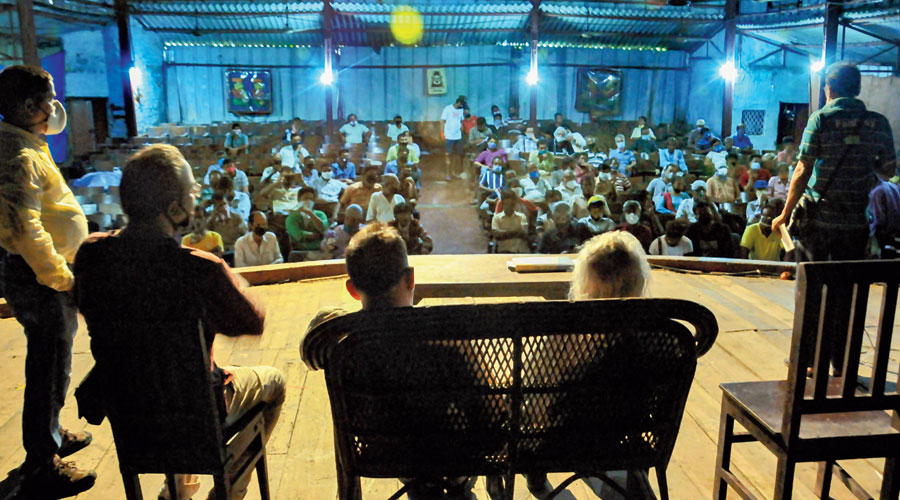 Backstage theatre workers hold a meeting in Calcutta on July 7 to discuss the steps needed to revive theatre in the wake of the pandemic.
PTI
Pheroze L. Vincent   |   New Delhi   |   Published 16.07.20, 01:17 AM

Theatre director Bapi Bose was about to conclude a three-month workshop with Baul singers and stage a play on the 18th century mystic Lalon Fakir when the lockdown came into force. The loan he had taken for the production remains unpaid, and the miseries keep piling for the 64-year-old Sangeet Natak Akademi award winner as theatres remain shut.

Amidst this “tremendous crisis”, Bose tells The Telegraph that he has had the time to audit not just the accounts of his troupe, but the theatre artistes’ “role in society”.

“Virtual performances don’t make sense. Theatre needs to bring people together…. My conscience doesn’t allow me to join the Facebook circus or conduct so-called online classes on theatre,” he says.

Varoon P. Anand, a 40-year-old Spanish teacher who focuses on shorter, and more contemporary forms of theatre, was supposed to stage Fin Kennedy’s How to Disappear Completely and Never Be Found in mid-March, when curbs on gatherings were imposed in the capital in view of the pandemic.

“We have this motto that the show must go on. But what do you do when venues shut…. We are told in the theatre community that digital work is not theatre, but how could I not continue my work for those who define their lives on the basis of this work?” he says.

Anand, whose Spanish classes at the Instituto Cervantes had to switch to the Zoom app, began to experiment with the video medium for theatre. “We do mental health workshops through improvisation — acting, performing, et cetera. People who come to mental health workshops come because they feel they are not in a safe place. You can’t tell them, sorry lockdown…

“The workshops that used to have 25 people now have 80. There is far more control on how to conduct the workshop, some can be removed if they are disruptive, and participants can decide how they want to involve themselves — whether they want to be visible or not,” he explains.

On May 4, Anand’s group Kaivalya Plays screened Kennedy’s play on their website. The performance was entirely recorded on Zoom. For another play, screened on Instagram, Anand and his co-actor staged it in different rooms of their homes, costume changes, et al.

Anand says he and his group learnt from their mistakes and only got better. “The initial work was not great, he says. “By making 10 mistakes, we can now make something that people enjoy. Kaivalya is now offering fellowship in theatre management, too, online.”

The biggest challenge is the stigma actors face. “Many actors come to theatre as an escape. Our lead actor was very uncomfortable as his parents were yelling at him during rehearsals. He had to join a coaching class for MBA to convince his parents that he isn’t wasting time doing something silly. Working from home is not easy in a society when many are deeply uncomfortable seeing someone do theatre, and many don’t have the luxury of space in their homes,” Anand says.

Ishwar Shunya, known for his contemporary realist plays, misses the energy one gets from a live audience. He finds online classes ineffective and several of his students uninterested. Yet, he has taken to new media with a vengeance.

“Most of my actors have gone to their villages and are out of work. We are adapting to the new structure with fewer actors, recording monologues and arranging them into plays on issues of the lockdown like displacement and domestic violence,” he explains.

Sudhanva Deshpande of the CPM’s street theatre troupe Jana Natya Manch has been doing online poetry readings. Janam’s plays used to be conducted with the help of trade unions, whose members are now neck-deep in providing relief to workers rendered jobless by the lockdown.

Janam members have been rehearsing on Zoom. They also participate in word association and other improvised games to remain connected with each other, keep in touch with art, and remain in good cheer.

Puppet theatre group Katkatha has successfully transitioned into the online sphere. When the lockdown began, they staged a five-weekend theatre fest online as a fundraiser for traditional puppeteers who were in need of food and relief.

“We had resisted going digital for so long because our attempt was to create a live space that could especially move children away from gadgets…. But this has been an opportunity to reach those we could not reach before. Twenty years of theatre gets your habits set and you get into a comfort zone,” the group’s director, Anurupa Roy, says.

The online shows get almost 800 viewers — huge compared to what Katkatha’s live shows in Delhi would attract. Roy misses the massive turnout they would get at festivals held in smaller towns, but the average response online has been twice as much. This has prompted Katkatha to craft performances tailor-made for the online audiences.

“The challenge is to keep thinking of what next. A lot of us are not in a good mental space, and many theatre people are facing livelihood crises…. The digital space will remain important even after this pandemic is over,” she says.