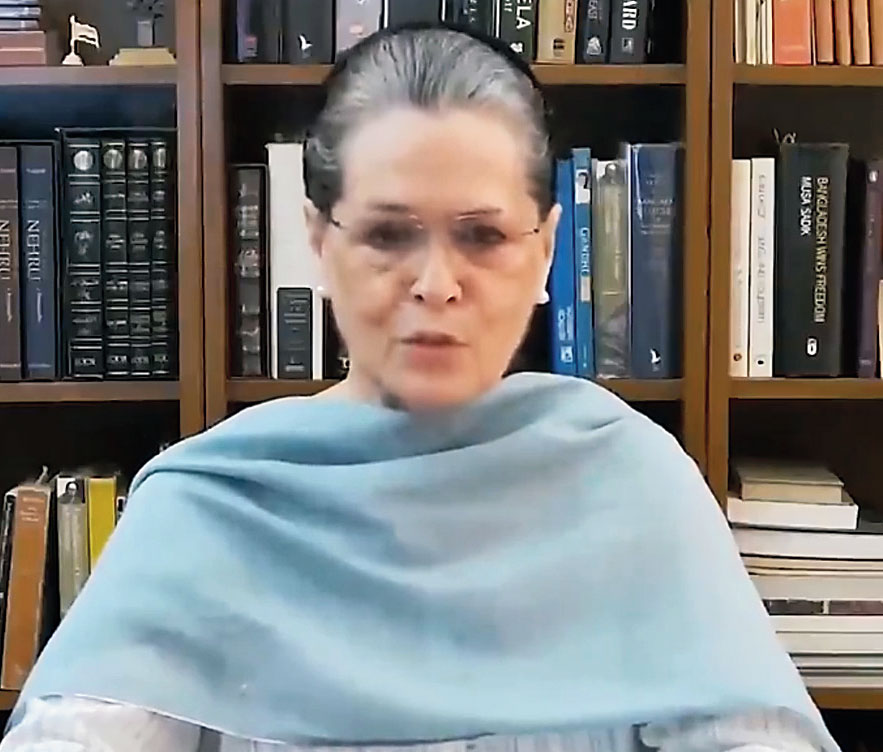 The Congress on Tuesday expressed deep disappointment at Prime Minister Narendra Modi’s address to the nation, claiming that he neither had any strategy to fight the coronavirus pandemic nor any concern for the poor and the economy.

Although several senior Congress leaders articulated their concerns over the perceived lack of substance in the rhetoric of the Prime Minister, who extended the lockdown till May 3, the exasperation was best manifested in former finance minister P. Chidambaram’s emotional response: “Cry my beloved country.”

The Congress also disapproved of Modi’s attempt to take credit for the management of the crisis and the comparison he drew with countries that were in apparent graver distress.

Chidambaram said in a series of tweets: “Beyond (the extension of) the lockdown, what was new in the Prime Minister’s message? It is obvious that livelihood for the poor — their survival — is not among the priorities of the government.

“The chief ministers’ demand for money elicited no response. Not a rupee has been added to the miserly package of March 25, 2020. From (economists) Raghuram Rajan to Jean Dreze, from Prabhat Patnaik to Abhijit Banerjee, their advice has fallen on deaf ears.

“The poor have been left to fend for themselves for 21+19 days, including practically soliciting food. There is money, there is food, but the government will not release either money or food. Cry, my beloved country.”

Senior leader Anand Sharma stressed that a financial stimulus was the urgent need of the hour. “We expected the Prime Minister to unveil a strategy for staged lifting of the lockdown for essential sectors of industry, especially MSMEs, agro and food-processing industries, the unorganised sector and those manufacturing healthcare products,” he tweeted.

“As stores are running empty, production of essential goods needed to be ramped up and issues on the supply side (needed to be sorted out); transportation and distribution need to be addressed. Disappointing that the Prime Minister did not unveil a roadmap for revival of economic activity,” Sharma added.

“The country wanted to hear from him whether the government has augmented its capacity to test, to offer personal protection equipment to frontline workers, to feed the millions of poor, to revive economic activities. We heard nothing about these things.”

Tewari raised the shortage of PPE kits and the lack of adequate volume of tests.

“There are two purposes of the lockdown: to check the spread of the virus and to give time to the administration to prepare for the crisis. We have reports from across the country that frontline warriors — doctors, nurses, para-medics, municipal workers — do not have adequate number of PPE kits. Has the government arranged for enough PPE kits? Has the government augmented its capacity to test? What is the strategy to test, detect and isolate patients? Lockdown alone cannot solve the problem,” he added.

“India delayed the purchase of testing kits and is now critically short of them. With just 149 tests per million Indians, we are now in the company of Laos (157), Niger (182) and Honduras (162). Mass testing is the key to fighting the virus. At present we are nowhere in the game,” Rahul tweeted.

Till a few days ago, India had been conducting 29 tests per million population.

Recalling the mass exodus of migrant workers in the initial days of the lockdown, Tewari said: “What is the strategy for those workers who were quarantined? After they completed the 14-day (isolation) period, how will the government arrange for sending them home? There are millions of people who are facing hunger. How will the government supply food to them? The number of MGNREGA workers has reduced to 1 per cent of the normal in the month of April. Will those having job cards be paid? These are the real concerns.”

He also raised concerns about the movement of factory workers and farm labourers once economic activities resume.

Asked about the Prime Minister’s attempt to take credit, Tewari said: “Time will come to ask questions. Right now, we have decided to give constructive suggestions in national interest, to protect every section of Indian citizens. But suffice to say that Indians are not fools. They understand what is going on, they know whether such a speech was required at this critical stage.”

On the comparison with other distressed countries, Tewari said: “We pray our country doesn’t have to suffer. We pray for the wellbeing of the entire world. Everybody should get better. Comparison, about where more people are dying and who is suffering more, is not desirable. This is not a humane approach. There will be a time when every aspect will be scrutinised. But right now we have to stay united and fight the crisis together.”