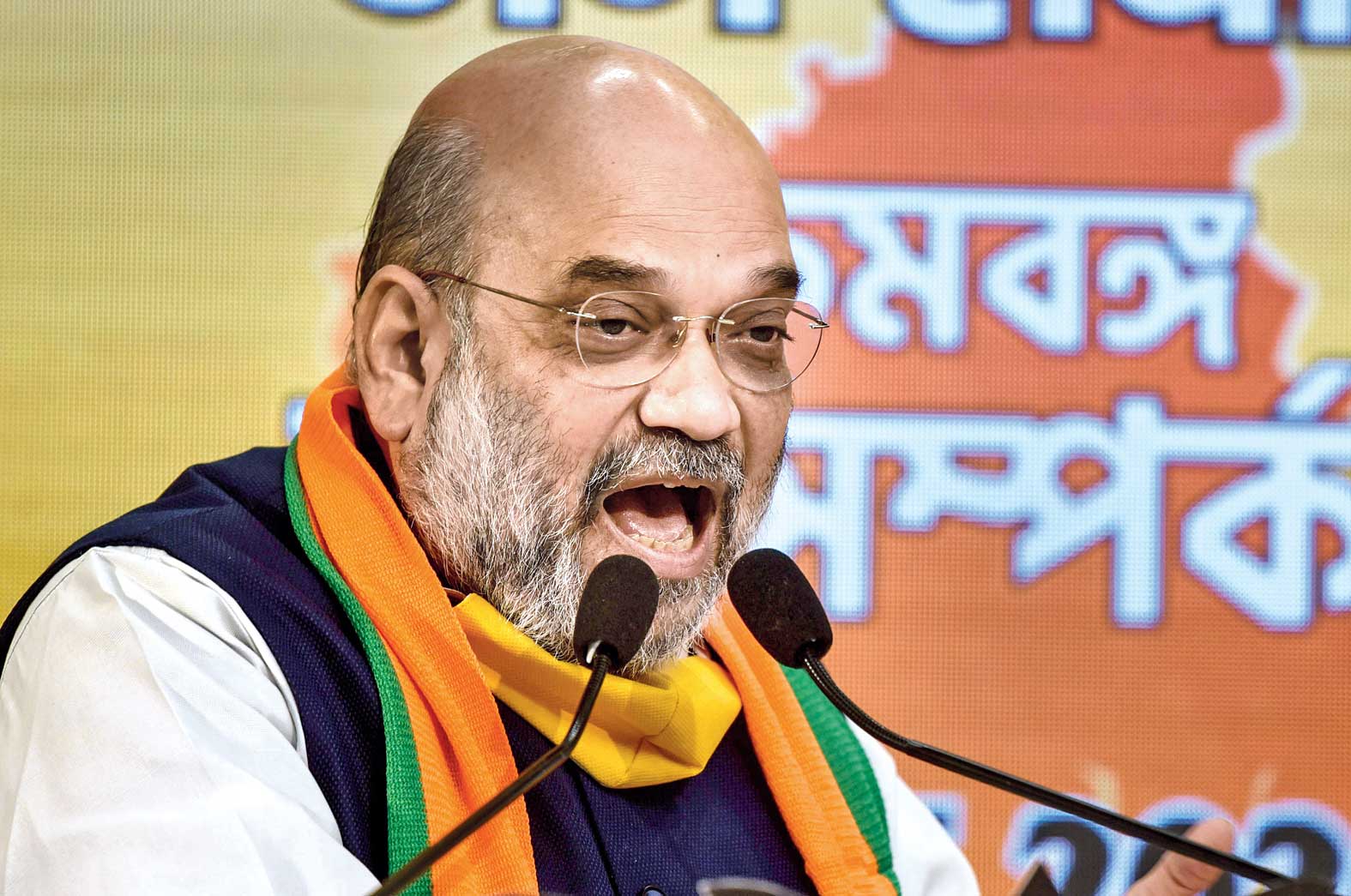 Seventy-five days of vigorous hand-washing could not remove some stains — such as pride in the Citizenship Amendment Act (CAA).

Union home minister Amit Shah on Tuesday dusted off the CAA plank with renewed zeal, attacking chief minister Mamata Banerjee for her opposition to the controversial law and predicting that she would be reduced to a political refugee after the Assembly elections next year.

The Union home minister’s speech, delivered in the middle of the pandemic and an economic crisis, apparently reached at least 50 to 60 lakh people, according to BJP sources, through social media by the evening. Shah’s thrust left little doubt that the citizenship matrix would be a key element of the BJP’s campaign narrative for the 2021 Assembly polls.

“Why is Mamatadi against the rights of the Matuas, Namashudras and other Bengali refugees from Bangladesh?”

Shah was referring to a segment of Bengalis, mostly involved in agriculture, who had migrated to India from the erstwhile East Pakistan (and latter-day Bangladesh) and settled in various parts of Bengal. The BJP has been trying to woo this section, largely settled in the two 24-Parganas, Nadia and some parts of north Bengal, with the new citizenship act.

Calling the CAA discriminatory and anti-Constitution, the Mamata Banerjee government had passed a resolution against the amended law. The chief minister herself had led several rallies across the state to protest the new citizenship regime.

The country had witnessed unprecedented protests against the law, which were put on hold because of the coronavirus outbreak and the lockdown.

The BJP leadership, however, thinks that Mamata’s opposition to the amended citizenship law has helped polarise the state, which would help the party politically.

Referring to Shah’s speech, in which he accused the state government of playing the politics of appeasement and said the administration had prioritised “one community”, a BJP leader said the polarisation agenda had been fulfilled.

Shah’s video rally was organised as part of the BJP’s attempts to tell people about the Narendra Modi government’s achievements.

The Union home minister spent considerable time accusing the Trinamul government of being apathetic towards the plight of the migrant workers.

Drawing a comparison with BJP-ruled Uttar Pradesh, he said the Bengal administration had accepted only 236 trains carrying 3 lakh people whereas the UP government had accepted 1,700 trains.

Shah said he was shocked when Mamata referred to the Shramik Special trains — meant to ferry migrant labourers back to their home states — as Corona Expresses.

“The Bengali migrant labourer will not forgive you for this. The Corona Express will be the reason for your exit,” Shah said.

A state BJP leader later said it was a strategic move to weave the plight of the migrants into the party’s anti-Mamata narrative. “Most of the migrant workers are Muslim and we want to prove that Mamata, who claims to be their messiah, has failed them during their crisis,” this leader said.

Shah congratulated the people of Bengal for their high-spirited fight against the coronavirus pandemic and Cyclone Amphan and rolled out details of how the Centre had extended all possible help to the state. He accused the state government of not doing enough for the victims of the virus or the storm.

Shah criticised Mamata for not implementing two central schemes — the Ayushman Bharat and the Pradhan Mantri Kisan Samman Nidhi — in the state.

“Send us the list of the farmers on Saturday and by Monday, the Union government will disburse their money. Please don’t do politics over the needs of the poor,” he said.