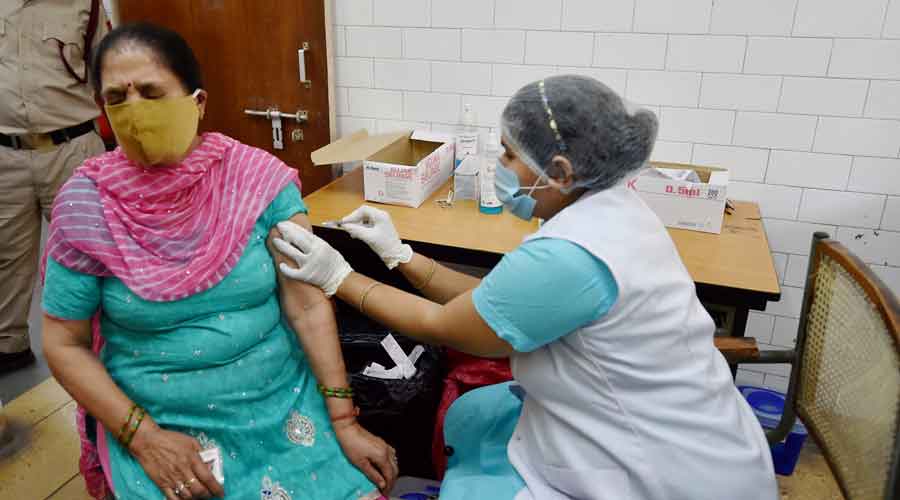 India’s current Covid-19 vaccine production capacity is insufficient to meet its target of administering five million doses per day, an expert panel underlined on Wednesday, shedding light on shortages flagged by states but denied by the Union health ministry.

“It is critical to ramp up production capacity,” the task force — a group of public health experts, senior government administrators and academic researchers — assigned to propose options to address India’s second Covid-19 wave has said in a report.

The group has also recommended “urgent attention” to three critical elements on vaccines — “alternative sources for imported raw materials that are already in short supply, expansion of fill-finish facilities by bringing other manufacturers, and provision of financial support to manufacturers to ramp up production”.

“Where does the question of (vaccine) shortages arise?” Vardhan had tweeted on April 8. “We’re continuously monitoring and enhancing supply.”

A query sent by The Telegraph on Wednesday to the Union health ministry seeking the minister’s response to the states’ complaints of shortages has not elicited a response.

But a medical expert who is not a member of the task force said that at the current production capacity and the current pace of vaccination made it clear why some areas might be experiencing shortages.

The health ministry has said India is administering on average about 4.1 million doses per day and advisers to the vaccination campaign have said the goal is to reach five million per day.

The India Task Force has also sought a nationwide ban on gatherings of 10 people or more for the next two months and proposed that the vaccination net be widened to include all adults with chronic health disorders and phased opening of vaccination for younger people.

The group, pointing out that large congregations such as political, religious and social events, such as weddings, or sporting programmes could rapidly spread the coronavirus, has asked for a ban on more than 10 people for the next two months.

“Such restrictions will be disruptive, but (we) believe public health concerns need to override any other considerations, given the risk of infection, morbidity and mortality,” said the task force, set up by The Lancet Covid-19 Commission in partnership with the Centre for Sustainable Development, Columbia University, and the United Nations Sustainable Development Solutions Network.

It has also recommended a special focus to ensure all urban poor in the current vaccine eligible group of people 45 years or older receive vaccinations as early as possible in districts with the fastest-growing epidemics and a “phased opening” of vaccinations for younger people “as supplies permit”.