Literally, a graveyard shift for doctors 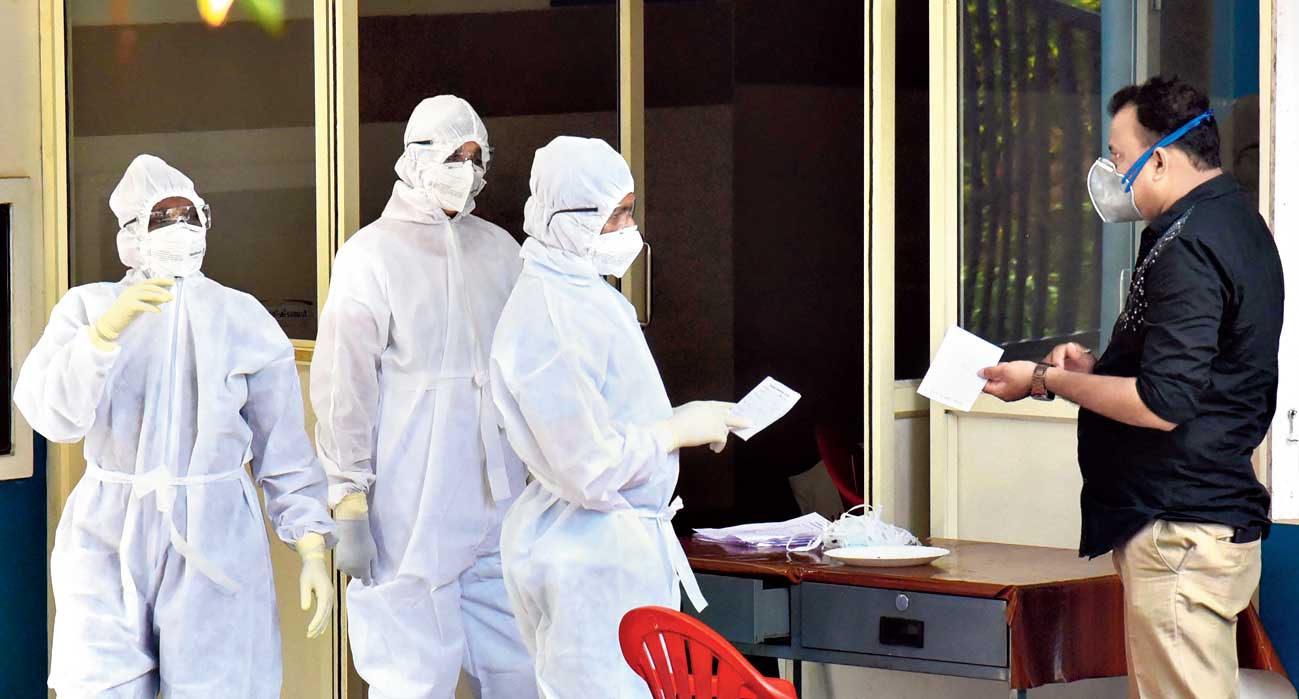 Medical staff wear masks and protective suits to mitigate the spread of the coronavirus outside the special isolation ward of a hospital in Kochi on Thursday.
(PTI)
K.M. Rakesh   |   Bangalore   |   Published 12.03.20, 09:31 PM

A woman doctor, waiting alone at a cremation ground at night when The Telegraph called her, typified the hard work and long hours that some of Kerala’s medical professionals have been putting in to battle the coronavirus infection.

The senior doctor, a district medical officer, was at the cremation ground to wait for a body — that of a patient who her sources had said may have had a coronavirus infection but died at home undiagnosed.

She was waiting to ask those accompanying the body what the patient’s symptoms had been and, if these suggested possible covid-19, arrange for the quarantine of the patient’s family and contacts.

“Will you believe it if I told you I’m at a cremation ground waiting for a body to be brought?” the doctor, who didn’t want to be named, asked when this newspaper contacted her around 8pm on Wednesday night.

“I know it’s difficult to believe. But that’s the sort of thing we are doing to ensure that even the dead undergo the coronavirus check, if necessary.”

She declined any more details lest that help identify the dead patient or the place and trigger a panic. “We don’t want to leave anything to chance. A death from any respiratory illness must be checked,” she added before hanging up.

Till Thursday night, no death caused by the virus had been reported in Kerala. Two men who had arrived from Dubai and Qatar tested positive on Thursday, taking the state’s tally of confirmed coronavirus patients to 19. Of the 19, the first three have recovered.

A Facebook post by another doctor, Shameer VK, has made several people aware of the backbreaking work pressure that doctors, paramedics and grassroots health workers are now facing and the dedication with which they are handling it.

In the widely viewed post, Shameer, a senior physician at the Government Medical College in Kozhikode, has referred to members of the coronavirus-fighting teams as “machines” because of their tireless toil.

“My friends, there are a lot of machines running around since the corona(virus) scare reached us. They give good care with the existing facilities, whether it’s day or night, even working beyond their shifts,” he wrote in Malayalam.

“Do you feel good saying that only three cases were there and all of them are cured? By then, just 3,000 people would have handled the job of a million… without your knowledge, without proper facilities and equipment,” he wrote.

Shameer told this newspaper how teams have to be mobilised for each case — to bring a suspected coronavirus patient to hospital, treat and tend to him round the clock without the involvement of family members, and identify and trace every possible contact and arrange for their quarantine.

He said the central team at the hospital needs at least two doctors, two nurses, one or two nursing assistants and two cleaners to exclusively treat the coronavirus patients. A second team must be formed if there are more than six such patients.

Another three or four Asha (community health) workers or Anganwadi (rural childcare) workers are needed per patient to trace the contacts.

“Today we received a call about a man who had recently arrived from Dubai and had developed some coronavirus-like symptoms. We put a team on the job to isolate him. Now imagine what if we received 100 such cases a day,” Shameer said.

Shameer, who was part of the medical team that battled the Nipah virus that killed 17 people in Kerala in 2018, is now a member of his hospital’s coronavirus team.

“Our infrastructure cannot be compared with that of western countries or China, which built a hospital in 10 days flat. But it’s the goodness of our people that has always been a great leveller,” he told this newspaper.

Recently, it was reported that China built a 1,000-bed hospital in Wuhan, with several isolation wards and 30 intensive-care units, in 10 days.

“Human resource is our main strength, with one person doing the job of 10 or more people. But if we fail to contain the outbreak, we lose the battle,” he said.

“Kerala has excellent medical and paramedical staff. Even the Asha and Anganwadi workers who trace the contacts with their local reach have been doing a great job.”

“The first Nipah outbreak was the worst experience for us. Since relatives are not allowed to get close to the bodies of their near ones, we had to cremate or bury them ourselves,” Shameer said. “In a few instances our staff had to cremate patients who had died of other causes since their families had abandoned them fearing they had had Nipah.”