CJI points out that the distress in 'rural tribal, remote and hilly areas' is slowing justice delivery and depriving thousands of young lawyers of their livelihood 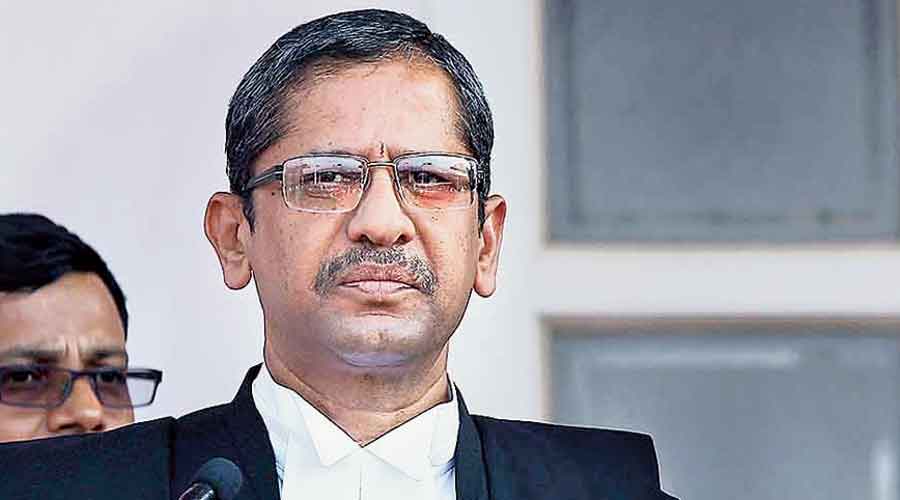 Chief Justice of India N.V. Ramana on Saturday expressed concern at “the poor digital connectivity in rural, tribal, remote and hilly areas”, saying this was slowing justice delivery across the country and depriving thousands of young lawyers of their livelihood.

Justice Ramana said he had written to Union law and information technology minister Ravi Shankar Prasad to address the problem, underscoring the importance of the issue at a time the pandemic has forced all court proceedings to be held virtually.

The Narendra Modi government has been claiming that its massive digital push has turned administration into a smooth and seamless exercise.

The CJI said he had asked the Union minister to evolve a way of helping lawyers who  had lost their livelihood to the pandemic and urgently needed financial assistance.

Justice Ramana’s remarks came at a panel discussion that followed the online launch of a book, Anomalies in Law and Justice, authored by the former Supreme Court judge, Justice R.V. Raveendran.

The CJI told the audience that the issue of poor connectivity had figured prominently also at the two-day conference of high court chief justices that he had recently convened.

Justice Ramana said that poor connectivity was pushing a whole generation of lawyers out of the system.

Justice Ramana said that his letter to minister Prasad requested him to prioritise bridging the digital divide.

Further, his letter highlighted the need to declare legal professionals and associated functionaries as frontline workers and prioritise their vaccination, he said.

The letter asked the Centre to take the following steps:

⚫  Strengthen the digital network and connectivity beyond the major urban centres, particularly in the rural and tribal areas.

⚫  Vaccinate all functionaries associated with the courts and their families across the country to facilitate full-scale functioning of the courts.

⚫  Recognise all functionaries associated with the courts, including the lawyers, as frontline workers in the context of providing pandemic-related relief.

⚫  Provide financial support to lawyers, especially junior lawyers, who are struggling to survive with the pandemic having robbed them of work for more than a year.

“It would be highly appreciated if you could take up these issues with the concerned ministries/ departments at the highest level,” Justice Ramana wrote to Prasad.

He also stressed the need to provide the courts with the latest information and communication technology tools to facilitate access to justice, and to revamp the judicial infrastructure to tackle the challenge posed by the huge backlog of cases.

“A blueprint of the proposal to set up the National Judicial Infrastructure Corporation (NJIC) is in the final stages of preparation and will be shared with the Union government shortly,” the letter, sent in the second week of this month, said.

Justice Ramana said that during his recent interaction with the high court chief justices, he had emphasised the need to speed up the process of sending collegium recommendations to the government to fill up vacancies in the high courts.

Trained under S.G. Sundaraswamy, a doyen of the Karnataka Bar, Justice Raveendran had developed an ability to relate to the people and issues around him, he said.

“Justice Raveendran’s judgments are of great value, not because they are replete with western jurisprudence or are rich in legal jargon, but because of their connect with today’s Indian context and its people,” Justice Ramana said.

“He never tried to project himself as the saviour of the judicial process. He continued to be humble and believed that the office which he held did not exist for himself. He discharged his duties with distinction and commitment to the people. He exemplifies all that is great about our institution.”

Justice Raveendran’s judgments had set a high standard of excellence and demonstrated that the law can be a force for bringing out the best in the community and making society a better place, Justice Ramana said.

He said Justice Raveendran had in his book made an earnest attempt to explain to the ordinary reader in simple words the various deficiencies in the law that need to be overcome so that the citizen does not lose faith in the judiciary and the legal system.