'Most of the migrants were on their way to Bulandshahr, nearly 2,200km from Mangalore where they stay' 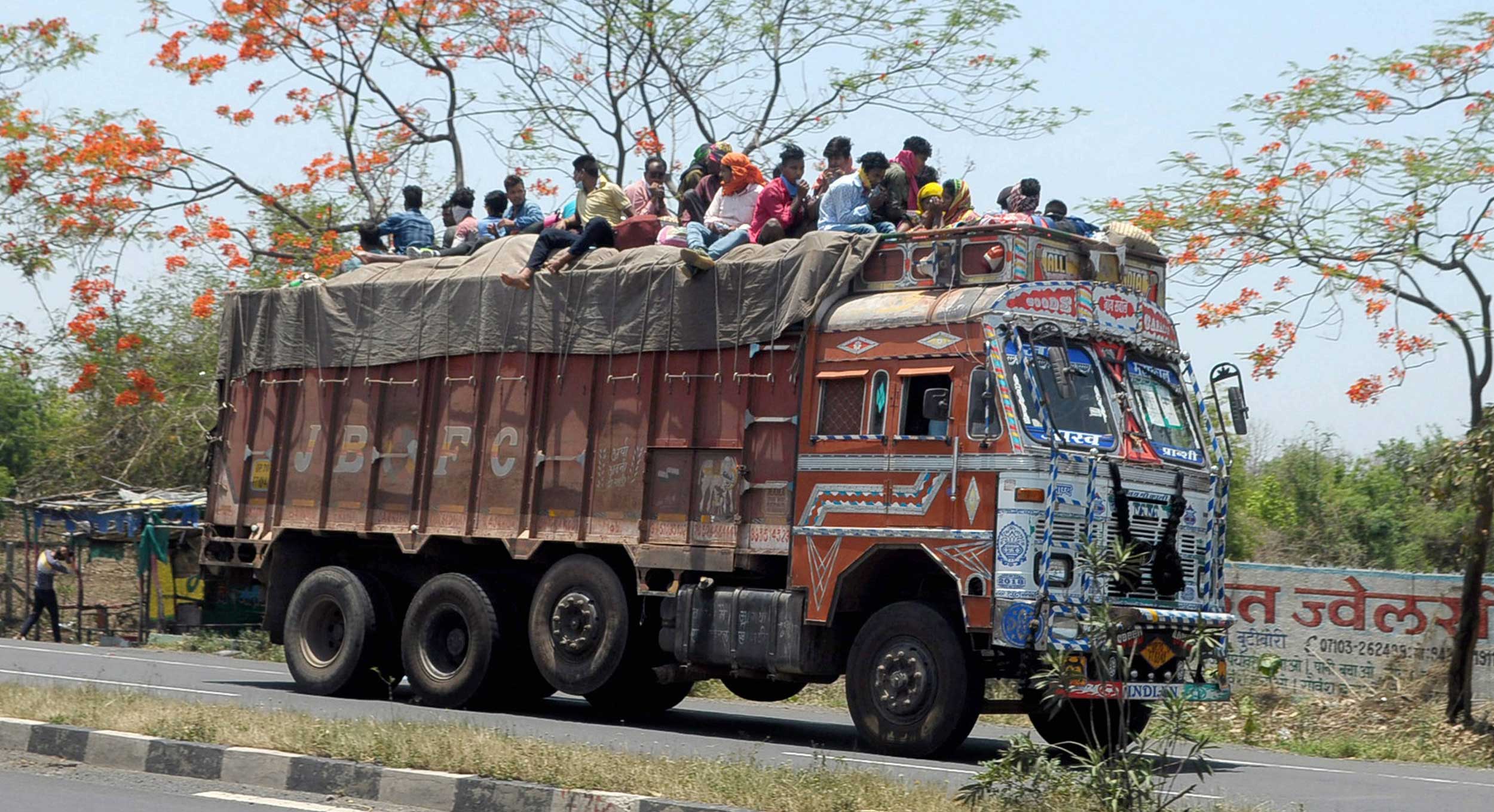 Migrant workers travel atop a loaded truck to their native places in Nagpur on Wednesday. The trucks, registered in Haryana, have been seized and the migrants were sent back to their accommodation on Friday.
(PTI)
K.M. Rakesh   |   Bangalore   |   Published 09.05.20, 08:08 PM

Two trucks carrying 120 migrant workers headed for Uttar Pradesh and other states were stopped early on Friday at a checkpoint in southern Karnataka, not very far from where they stayed, averting what could have been a cramped and exhausting journey over thousands of kilometres.

A government official said most of the migrants were on their way to Bulandshahr, nearly 2,200km from Mangalore where they stay.

The trucks, registered in Haryana, have been seized and the migrants were sent back to their accommodation on Friday.

“The workers were on a dangerous ride since they barely had space in the trucks. We got buses and sent the workers back to their accommodation in Mangalore,” Puttur assistant commissioner Yathish Ullal told The Telegraph on Saturday. No women or children were among the 120 migrants.

The abortive bid to reach their homes came days after the Karnataka government had on Tuesday cancelled special trains for migrants, apparently to cater to the needs of the builder lobby eager to complete pending projects. The state government has since reversed its decision following widespread outrage.

The two trucks were intercepted around 3.30am about 90km from Mangalore at a checkpoint in Gundya, 50km off Puttur town, on the border of Dakshina Kannada district. Mangalore, around 350km from Bangalore, is the district’s headquarters.

“It was the stringent checking we had launched after the lockdown that helped us uncover this plot,” Ullal said.

For some reason the incident did not get any media attention on Friday, when Mangalore was busy handling more than a thousand migrant workers who had gathered at the railway station demanding trains to go home.

Ullal said the majority of the 120 workers on the trucks were headed for Bulandshahr, Uttar Pradesh. It was not known how much each had paid the truck drivers who were arrested but released on bail.

The drivers have been booked for negligent and malignant acts likely to spread an infectious disease dangerous to life.

Ullal said officials promised the workers they would be sent home at the earliest, either by bus or train. “We convinced them to go back to their accommodation with great difficulty, as none of them wanted to stay back,” he said. “The workers agreed when we told them buses could be hired to take them home and we could meet the expenses if they didn’t have money.”

The workers were then given dry rations to sustain them till the next best transport option was available.

Ullal said some states were not issuing clearances for Shramik Express trains being run for migrant workers. “The workers think we are lying when we tell them their states are not giving the clearance. We are trying our best to send them home.”

The Mangalore administration has since Thursday sought 21 Shramik Express trains but has not received clearance for even one. The governments of states receiving the migrants have to give their clearance before the trains can set off from their stations of origin.

“(Most of) those who want to go home are from Jharkhand, Bihar, Uttar Pradesh, Rajasthan and Odisha. Not many workers from Bengal are willing to go home at this stage,” Ullal said.

Since each train can carry 1,200 passengers, factoring in social-distancing measures, the district would need at least 17. The extra four trains have been sought just in case more migrants register for travel.

Karnataka High Court on Friday directed the state government to place on record its policy regarding the transportation needs of migrant workers.

“We direct the state government to place on record in what manner the state is going to arrange for operation of special trains for the benefit of migrants,” the court observed while hearing a petition filed by the CPIML Liberation’s trade arm AICCTU.