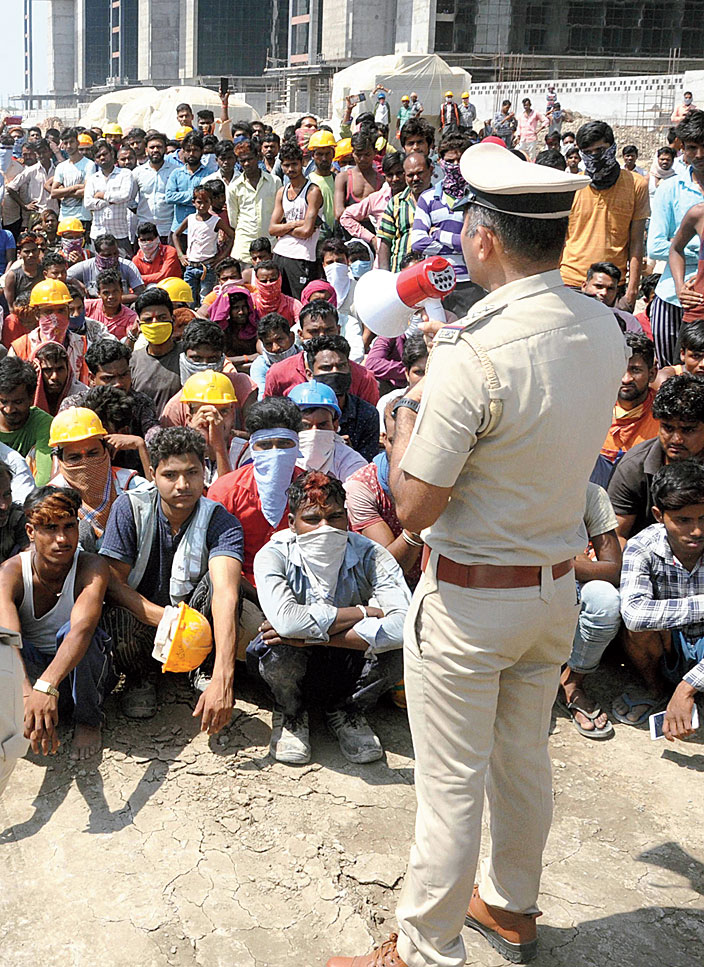 Police appeal to the protesting migrant workers, demanding to be allowed to return to their home states, to maintain calm at the construction site in Surat on Tuesday.
(PTI)
PTI   |   Surat   |   Published 28.04.20, 09:47 PM

Hundreds of migrant workers vandalised the office of an under-construction building and some vehicles in Gujarat’s Surat district on Tuesday to demand that they be sent back to their native places, after the contractor brought in labourers from elsewhere.

The workers, who had earlier been hired by contractors engaged in the construction of the Diamond Bourse Complex in Khajod area, sought to know why they could not be sent home when permission had been granted to bring in fresh labourers from elsewhere. The protesters also expressed the fear that they could contract the coronavirus from the new workers.

Police said the contractors had received the approval to bring in more workers to speed up the construction work.

Deputy commissioner of police (zone-3) Vidhi Chaudhari said: “They got angry on seeing labourers from outside at the site. They claimed that the outsiders might be carrying the coronavirus. These workers then started asking that if permission could be granted to bring outsiders here, then why could they not travel to their native places? The demand triggered the violence.”

The protesters damaged the administrative office of the under-construction site and two cars parked nearby, she said. “We have started the process to lodge an FIR,” the officer added.

The authorities in Surat on Tuesday allowed a group of 36 migrant workers to travel to Siddharthnagar in Uttar Pradesh, a day after permitting another batch of 150 migrants to return to Odisha in private buses.

Thousands of migrant workers from various states are stuck in Surat and other cities of Gujarat since the coronavirus-induced lockdown came into force on March 25.

The Gujarat government has facilitated the return of over 4,600 migrant workers to their native states of Rajasthan and Madhya Pradesh over the past three days.

“On April 27, as many as 2,314 labourers from Rajasthan, living in 158 labour camps in Gujarat, were taken to their native places in 84 state transport buses. The collector of Dungarpur district in Rajasthan received them,” additional chief secretary, labour and employment, Vipul Mitra, said.

All labourers were screened before boarding and social-distancing norms were followed, he said.

“Today, 36 migrants were given the permission to travel till Siddharthnagar in UP in a private bus, which was sanitised thoroughly before its journey,” said Surat MLA Sangita Patil.