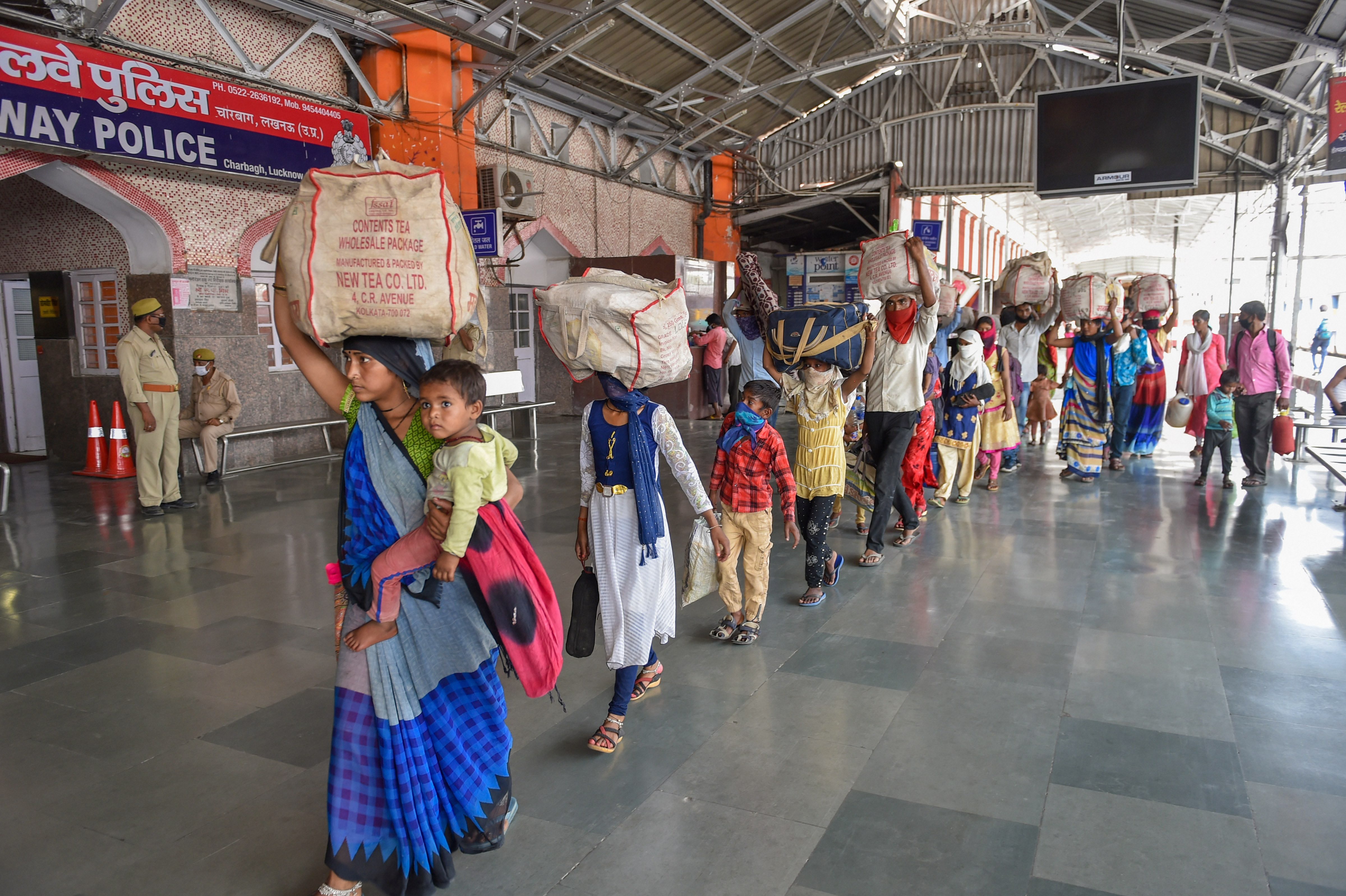 A 46-year-old migrant labourer died on a Shramik Express train on Saturday after having had nothing to eat or drink for 60 hours, a nephew who was accompanying him has alleged.

Raveesh Yadav said no food or water was served on the train — in violation of railway regulations — which he and uncle Jokhan Yadav had boarded from Mumbai to travel home to Machhlishahar in Jaunpur district, Uttar Pradesh.

He said the train had left the Lokmanya Terminal in Mumbai, where the duo worked as construction labourers, at 7pm on May 20 and reached its destination, Varanasi Cantonment station, around 7.30am on May 23.

“But my uncle, who was complaining of hunger and pain all over his body, fainted half an hour before we reached Varanasi Cantonment and died within a few minutes,” Raveesh, 25, told local reporters.

“We weren’t carrying any food or water because we had heard the railways were providing food packs and water bottles on the trains. Even the other passengers in our compartment had no food or water left with them, so nobody could help us. And there was no water in the train at all.”

Ravi Prakash Chaturvedi, additional divisional railway manager, Varanasi, denied that no food or water had been served on the train.

“The man died before the train reached Varanasi Cantonment station. The GRP took the body in custody. Family members of the dead man have said he was a heart patient and may have died because of that,” he said.

Raveesh said: “Yes, my uncle was a heart patient but he died because he was hungry for more than 60 hours.”

He said he and his uncle had bought their tickets for Rs 940 each — adding their voice to hundreds of returning migrants who have rebutted the government claim that no fare was being charged from the labourers.

“My uncle was very hungry when we boarded the train. Despite having some money in our pockets, we didn’t find any food or water to buy on our way,” Raveesh said.

“The train did not stop at any station till Katni, Madhya Pradesh, which it reached after 18 hours. Nothing was available at Katni station, where the train stood for more than three hours.”

Raveesh added: “Later, at many stations, we requested the Government Railway Police and railway officials to provide us water and food. But they ignored us and wouldn’t let us step off the train. The GRP was wielding lathis.”

A day earlier, lack of communication between railway and state authorities had compounded the misery of home-bound migrants. A Jaunpur-bound Shramik train from Mumbai had reached Kashi station in Varanasi at 1.30pm on Friday but was kept waiting more than seven hours — just 40km from its destination.

Railway sources said the Jaunpur authorities had refused to receive the train saying they had not been informed about its arrival in advance.

“We are normally informed two days in advance about such trains so that we can coordinate with the district administration and arrange buses to ferry the passengers to their villages, where they are kept in government quarantine for 14 days,” a railway official told reporters in Jaunpur on condition of anonymity.

“It was not possible for us to arrange about 20 buses for the 1,000-odd passengers within a few hours.”

Harikesh Rai, officer in charge of the GRP unit at Kashi station, said: “Later, it was decided the train would go to Mughalsarai, from where the migrants would be taken to their homes.”

The train reached Mughalsarai Junction around 9.30pm on Friday.

Chaturvedi, the ADRM Varanasi, told reporters: “There was some problem. If needed, an inquiry can be conducted.”