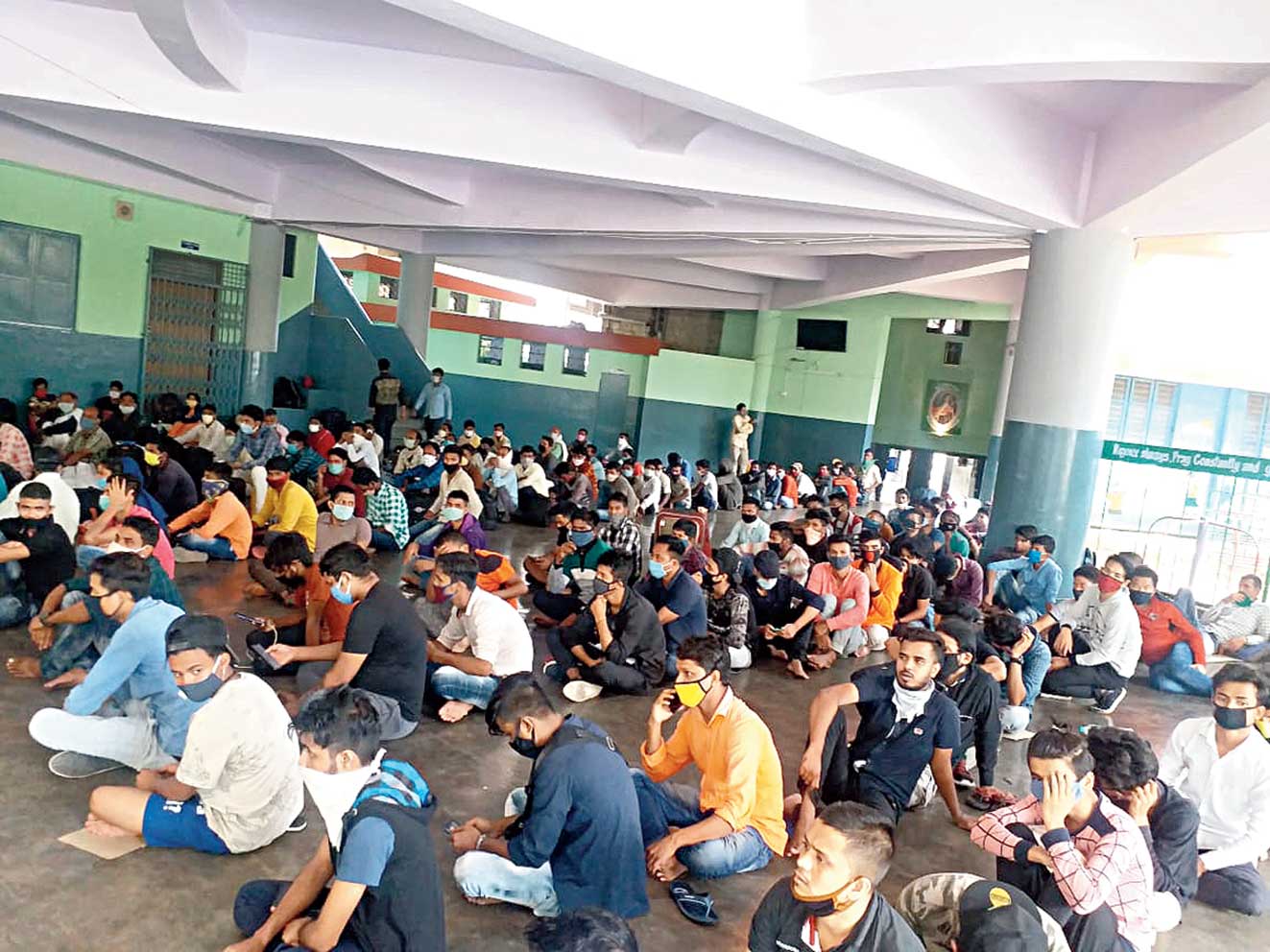 Shah Alam Mondal from Murshidabad has had to sell his one-bigha land and his wife’s jewellery to pay the wage dues of about 30 construction workers he had employed in Bangalore.

Mondal, who had been working as a sub-contractor in the Karnataka capital for the past few years, had to return because of the economic havoc wrecked by the pandemic-triggered lockdown.

“I got back to my village a few days ago. I had to raise the money since the families of my workers, all of whom are from my place, started coming to my home and pleading with me to clear the wage dues,” Mondal told this correspondent over phone from Murshidabad.

“I cannot make them understand that I have Rs 4 lakh stuck with a construction company in Bangalore. Since I know the abysmal financial condition of these workers, I had to sell my land and my wife’s jewellery to pay their dues,” he said.

The majority of migrants toiling in Bangalore’s once-booming construction industry and also factories for the past few years have left the city for their homes while the remaining are waiting to catch the next available train.

A recent circular from the department of revenue said more than 3 lakh migrant workers had left Karnataka since the lockdown was eased. They are among the 7 lakh migrants, including women and children, who have registered themselves for berths on Shramik Special trains from Karnataka.

Although there is no accurate data on migrant workers in the state, most of those who have left are among Bangalore’s 3.5 lakh-strong migrant workforce.

Another 25,000 workers have left in buses for places as far as Delhi and Gujarat.

With 84 Shramik Express trains — 16 of them to Bengal — scheduled from June 3 to 10, another 1.45 lakh workers will leave Karnataka. Most of the trains ferrying migrants back home are starting off from Bangalore.

A railway source said more trains would be scheduled to take back the remaining workers.

Some of the migrant workers still stuck in Bangalore for various reasons have started working again to earn some money before they return home.

Uncertainty over pending wages has cast a shadow on the welfare of the migrants, including many who have already left.

Khairul Munshi from Murshidabad has been struggling to get his wage dues. “I have three months’ pending wages. I don’t know when I will get the money,” Munshi told The Telegraph in Bangalore.

No doubt, he wants to go home, but before that he wants to collect the wage dues, Munshi said.

He has joined work at another construction site near Hosakote on the eastern outskirts of Bangalore. “At least I can earn some money before I go home to my family,” Munshi said.

Like most migrants ready to leave for their home states, Munshi said earning a livelihood in his native place was a better option now since he could be with his family.

Abbas Ali from Murshidabad is also grappling with the immeasurable financial fallout of the lockdown.

“My bills for Rs 8.5 lakh are pending and there is no sign of me getting my dues any time soon since the company appears to be in trouble,” the sub-contractor who employs several skilled and unskilled labourers at construction sites said.

Ali has taken up a small contractual work in the southeast suburbs of Bangalore. “Just before the lockdown, I had 25 workers. Today I am left with just three as the rest of them have gone home,” he lamented.

“Anyone can imagine what kind of work I can do with just three workers. But at least I hope to earn a little bit for myself and my workers before heading home,” Ali said.

There are others like Chotte Lal from Uttar Pradesh who are facing problems of their own. “I have lost my Aadhaar card, and also those of my wife and three children. I have no other identity card,” said Lal, who has been waiting for his turn to board a train back home.

He is among the few who had brought their families along to Bangalore.

“It is difficult to bring our families here since there is no guarantee of how long we can work here,” Mondal, the sub-contractor who has had to sell his land back home in Murshidabad, said.

“Back home, my children are with their mother and grandparents. Here, kids won’t get that attention when we go to work,” he added.

Zia Nomani, Swaraj Abhiyan central committee member, said only about 10 per cent of the more than 7 lakh people who had applied for passes to return home were children.

“They don’t go to school here. Teenagers become underage workers who help their parents,” said Nomani, who has been actively involved in helping migrants return home.

R. Kaleemullah, state coordinating committee member of the socio-political organisation Swaraj Abhiyan, is of the view that most migrants don’t send their children to school since they come to Bangalore only to earn some money within a short period.

“They come here assuming they would make some money in a couple of years and pay off their debts back home. But once they are here, they realise they can’t earn that much,” said Kaleemullah.

Now that many of them are going back home leaving pending wages and bills, there is a good chance that they won’t come back. “It’s difficult for anyone to return to a place that gave them a bad experience. I think a good number won’t return, unless they face some dire need to start working again,” Kaleemullah said.

Ali, the labour sub-contractor, is among the few migrants who is of the view that the workers have no future in their home states. “I will come back after a few months,” he said.