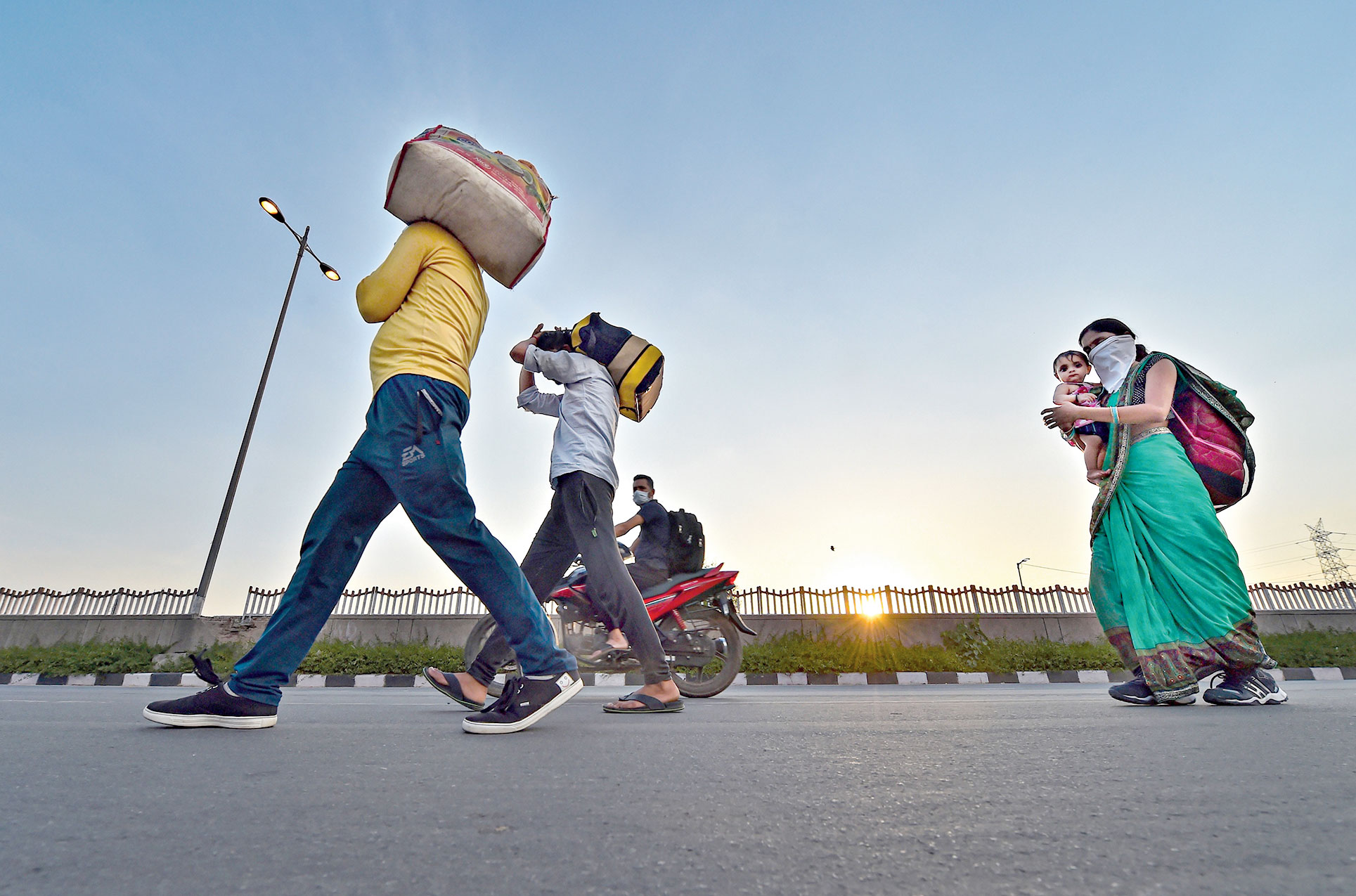 The coronavirus pandemic has confirmed and exposed what had long been suspected — that migrant workers, weak on physical, social and human capital and tied down by an unwritten exploitative contract, have always been discriminated against, a noted labour economist has said.

According to Professor Ravi Srivastava, honorary director, Centre of Employment Studies at the Institute of Human Development, migrant workers in India, particularly those who go for short-term circular migration, labour in harsh working conditions and are underpaid but can barely leave their contractors because of indebtedness.

Srivastava, who delivered a lecture on the subject on Saturday, spoke to The Telegraph on Monday to explain in detail the vulnerability of the migrant workforce in the country, especially short-term migrants.

The census puts the total number of migrant workers at 51 million but Srivastava said census and National Sample Survey enumerators don’t take into account labourers who go for short-term circular migration — of fewer than six months — to other states for work in sectors like construction, agriculture and manufacture.

Enumerators, he added, take into account only long-term circular migrants who mostly move from rural to urban areas and work in formal sectors or at high levels of the informal economy.

Srivastava estimated that there were around 120 to 140 million migrant workers in the country, including the nearly 60 million seasonal short-term migrants not counted by enumerators.

“These seasonal short-term migrants have a weak foothold in urban space and in their native places since they have least physical endowment, educational resources and social background. They enter into unwritten contracts with labour contractors and take money in advance, adding to their vulnerability. They are isolated too from local people (in areas) where they work and are discriminated (against),” Srivastava said.

Migration within states is high in Maharashtra, Andhra Pradesh and Karnataka. Bihar accounts for 28 per cent of inter-state migration, followed by Uttar Pradesh (22 per cent), Madhya Pradesh (12 per cent) and Bengal (9 per cent).

Srivastava quoted from the India human development survey to say that one in every two seasonal migrants are recruited through contractors. The percentage is higher — two-thirds — when it comes to the construction sector, which, he said, has serious implications, especially in a pandemic-hit economy.

If low wages and hazardous work environment made life difficult for this segment earlier, the pandemic has worsened their plight. The contractors who recruited them became unavailable as soon as the work sites closed after the lockdown kicked in.

Another problem Srivastava spoke of was about the type of work migrants do. He said 85 to 90 per cent of migrant labourers were from the Scheduled Castes, Scheduled Tribes, minority communities and the Other Backward Classes and did jobs local residents wouldn’t touch.

“Almost all the work in the leather industry, gelatin industry which uses bones, chemical industry, and sanitation is done by migrants. The locals do not do this (type of) work. The migrants also work for longer duration without compensation,” he said.

Srivastava said circular migration in India has been circumscribed by uneven development — decimation of rural and forest-based livelihoods, growing regional differences and concentration of economic activity around growth centres. The nearly 30 years that have passed since liberalisation began has increased the inequality, he added.

The economist also dwelt on another issue that has been the focus of the entire country: mass exodus of migrant workers. Since the Covid-19 lockdown began, migrant workers have had to fill in registration forms, submit medical certificates and wait for the consent of the governments of their home states and states where they work for travelling back to their native places.

Many of them, hundreds of thousands, couldn’t afford the luxury of waiting. They set out on foot to escape the unbearable containment of income-less lockdown.

According to a group of researchers who tracked deaths of migrants on roads and from hunger or other problems, 270 workers died between March 24 and April 24. Another group of researchers found that over 90 per cent of these workers did not get rations, while 70 per cent did not know that cooked food was being distributed by government authorities.

Srivastava cautioned against holding back migrant workers by putting cumbersome procedural steps for their travel. “It is wrong if anybody thinks that workers should be discouraged to travel so that they can be engaged in work in the locality. The workers are susceptible to Covid infection because of their accommodation being poor and unhygienic,” he said.

Srivastava said the Prime Minister’s Garib Kalyan Yojana of Rs 1.7 lakh crore the government had announced in March was inadequate and poorly targeted and called for income and food support for migrants, free transport for them, besides bringing more workers under the rural job scheme MGNREGA.