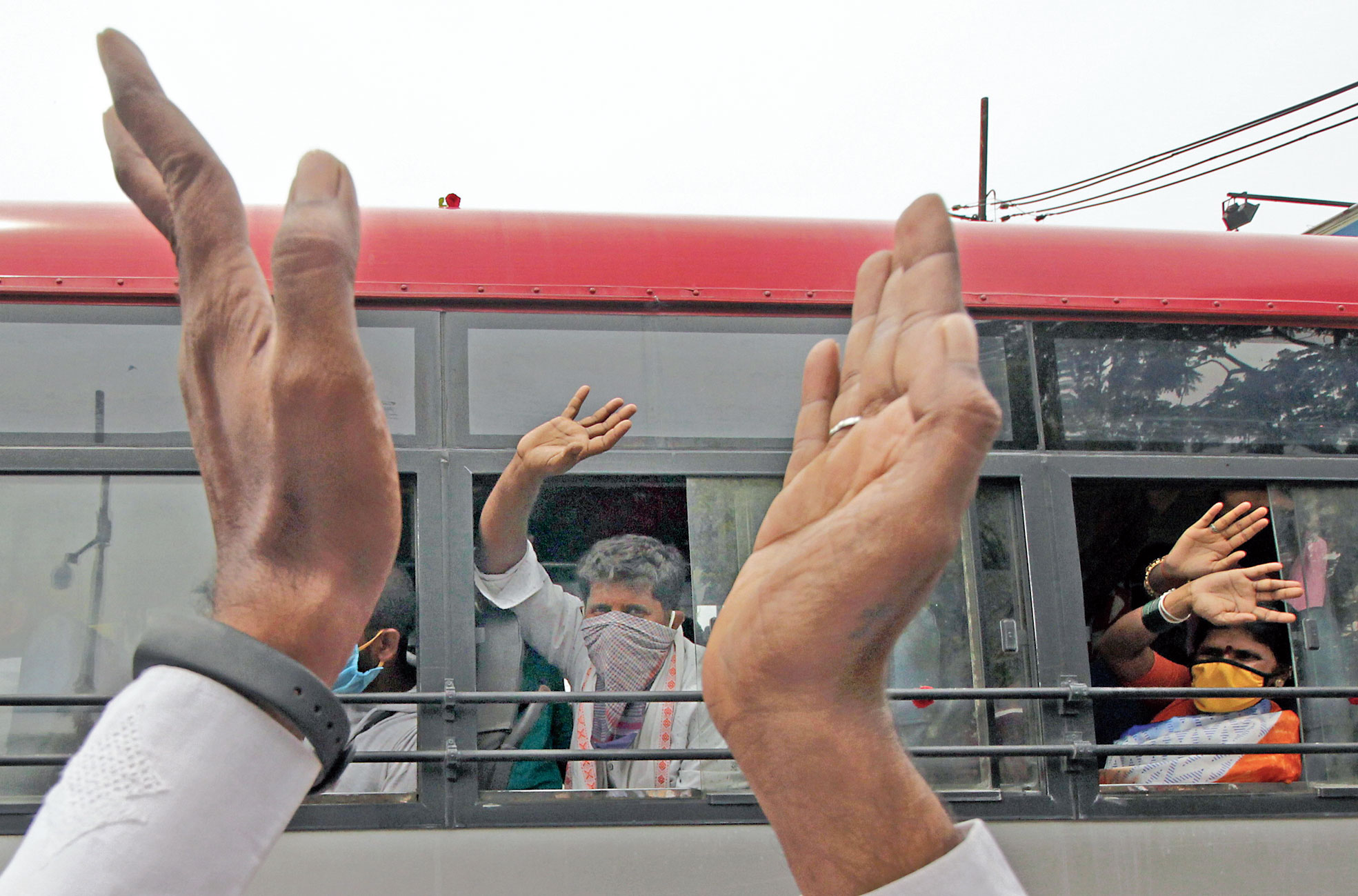 The Karnataka government on Thursday agreed to resume trains for homebound migrant workers, two days after its last-minute cancellation of all such trains provoked an outcry from the labourers and the Opposition.

“We are ready to run the special trains from May 8 to May 15 if the receiving states give their consent,” a railway official said after a meeting between state government and railway officials.

A leaked note issued by the state government to the railways showed that Bihar and Madhya Pradesh had given their consent to one train being run to each state every day from May 8 to 15.

Consent is awaited from all the other states, including Bengal, officials said in the evening. Karnataka proposes to send two trains to Bengal every day during the eight-day window.

The media began reporting the state’s turnaround by late afternoon. State education minister S. Suresh Kumar confirmed it in the evening and said the police had the full list of migrant workers who wanted to go home.

He wouldn’t say how many they were or how many trains the state planned to send out.

Workers had on Wednesday accused the government of treating them as “slaves without rights” after reports said the trains had been cancelled because the building lobby needed labourers to resume construction.

The CPIML Liberation’s labour arm AICCTU had petitioned Karnataka High Court to help the workers return home but the matter did not come up on Thursday.

R. Kaleemullah, a state-level leader of the socio-political organisation Swaraj Abhiyan who has been championing the workers’ cause, welcomed the rethink. “I’m glad that the Karnataka government finally realised that workers too have rights. We cannot stop anyone from leaving; it’s up to them to return to Bangalore,” he said.

Shakil, a construction worker from Bihar, was happy. “Many in my colony were very anxious and angry at the train cancellations. Now we have some hope of going back to our families,” he said.

In the morning, migrant workers had held protests at Bangalore’s labour colonies demanding trains and threatening to walk home if denied transport. Police teams visited several of these colonies to calm the workers and promise support.

A video clip from a labour colony in Veerannapalaya, north Bangalore, purportedly shows a police inspector telling the workers they too have rights and their case is coming up in the high court.

In contrast, Swaraj Abhiyan worker Tejasvini faced the wrath of the police who accused her of instigating the migrant workers to agitate.

“But they let me go after I explained I was only concerned about the workers’ welfare,” Tejasvini, who had visited a labour colony with dry rations, said.

Although Kerala has regularly been sending out trains carrying workers to their home states, hundreds of migrants marched in Payyannur (Kannur) and Koothattukulam (Ernakulam).

Some 500 tried to march to the Koothattukulam police station at 7am on Thursday, complaining they were being ignored while workers from Perumbavoor in the same district were being sent home.

When they refused to disperse, the police baton-charged them.

A railway official from Kerala said, without citing figures: “About 70 per cent of the migrants want to go home; we have lined up enough trains.”

Kerala has so far sent out 17 trains, most of them to Bihar, Jharkhand and Odisha, including three that left on Thursday.

“Only one train has gone to Bengal, which did not clear more trains,” the official said.

Bihar had stopped Kerala from sending any of the three trains scheduled on Monday but later agreed to receive a few.