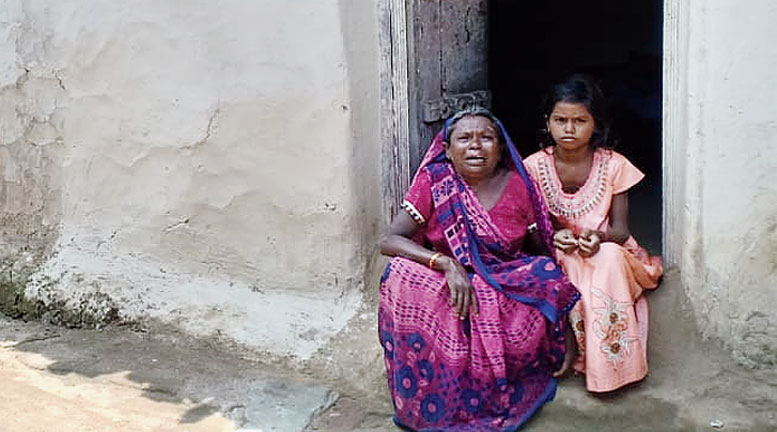 Somari Bhuiyan’s mother and a relative mourn after getting the news of his death in Chatra district of Jharkhand on Wednesday.
Picture by Bhola Prasad
Animesh Bisoee   |   Jamshedpur   |   Published 02.07.20, 02:06 AM

A migrant worker from Jharkhand hanged himself in his quarters in Tamil Nadu on Tuesday night after weeks of anxiety over his finances, his wife and a friend have alleged.

Somari Bhuiyan’s purported suicide underlines how lockdown-induced stress can continue to extract a toll even after the partial return of normality, for the 48-year-old had after two months of unemployment just received his paycheque for June.

“His wife said he had been depressed wondering how he would pay off his loans after the blow of the lockdown,” said Kido Bhuiyan, resident of Somari’s native village of Tulbul in Chatra, some 170km northwest of Ranchi, who used to work with Somari in Tamil Nadu.

Somari, who worked at a floriculture company at Thally in Krishnagiri, used a bed sheet to hang himself past midnight, his wife has said.

“Somari earned over Rs 7,000 a month while his wife, employed by the same company, used to be paid Rs 1,200 a week. They had been working in Tamil Nadu for close to three years,” Kido said.

“He had married off his eldest daughter last September in Chatra and taken loans worth nearly Rs 1 lakh from local villagers, promising to repay them by the end of this year. But the two-month stoppage of salary during the lockdown increased his worries and he began thinking he would not be able to repay the loans.”

Police sources said Somari had last spoken to his wife around midnight before they went off to sleep in separate rooms.

“Somari slept alone while his wife slept with their five young children. Early this morning his wife knocked on the door of Somari’s room but got no reply. She alerted others, who broke the door open to find Somari hanging from the ceiling fan,” Sivaraj, the officer in charge of the Thally police station, said.

“Prima facie it appears a suicide as there were no external injuries. We have, however, lodged a case of unnatural death. No suicide note was found but his wife said he was depressed over his poor financial condition.”

Kido said Somari’s wife had decided against bringing the body to their village for the cremation since it would cost a lot of money.

“We have consulted her and decided to perform his last rites here. We are trying to persuade the company management to arrange for some compensation for the widow,” Kido said.

Somari’s younger brother Bideshi and mother Baliya Devi said they were worried about the family’s finances in Chatra.

“I lost my job in the lockdown too. We use to look to my brother for help. We don’t know what to do,” Bideshi said.