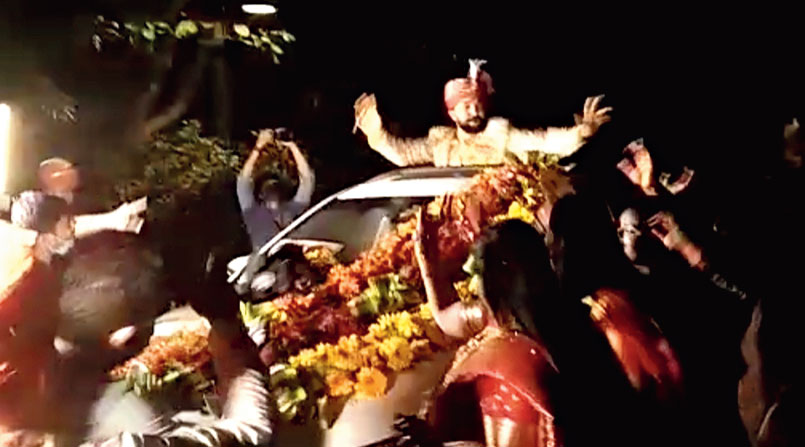 A groom and his immediate relatives were arrested on Saturday for violating the norms of social distancing during his marriage procession in southern Odisha’s Berhampur.

The groom, with no face mask, danced in the flower decked open car in which he was going to a five star hotel to tie the knot.

The marriage took place on Thursday. Police swung into action after a video of the marriage procession went viral on the social media on Saturday and arrested the groom and four other family members late on Saturday.

The marriage procession consisted of nearly 100 people but rules laid down by the government during the corona pandemic do not permit the participation of more than 50 people from both sides in such ceremonies and made the observance of social distancing norms mandatory.

A party was also thrown for 1,000 people in the hotel.

However, all of them got the bail in the police station. “We lodged cases against the groom, father and three of his uncles. But all of them secured bail under the provisions of law. All the cases are bailable,” Gopalpur inspector Vivekananda Mahant told The Telegraph.

Police sealed the five-star hotel where the marriage was held for seven days.

The violation of norms during the marriage drew flak from all quarters as Ganjam, the home district of chief minister Naveen Patnaik, is the worst affected by the pandemic.

It has reported the highest number of corona positive cases and deaths.

Soon after the incident, Naveen tweeted, “We are in a crucial phase in the fight against COVID 19 and hence its very essential that we all obey guidelines and regulations issued by the state government to contain the spread of COVID 19. Violation of the same would lead to strong action.”

Owner of the hotel and former Union minister Dillip Ray apologised for the incident. “An incident like this which goes against our state policies and priorities is the last thing I can imagine and I once again apologise for it,” Ray said

Stating that precautionary measures like social distancing are the only potent weapon to fight this pandemic and there can be no compromise on it, Ray further said: “In the face of this incident, the management has been directed to further upgrade the Covid-19 specific standard operating procedures and strictly ensure that no such incident repeat.”

In a related development, the Rourkela municipal administration announced that grooms coming to Rourkela for marriage from outside would have to remain in quarantine for 14 days.

“Only after completing the prescribed quarantine period, they will be allowed to marry and return to their native places,” said Rourkela ADM Aboli Sunil Naravane adding that as per rules every person coming to Rourkela city, will have to undergo 14 days quarantine.