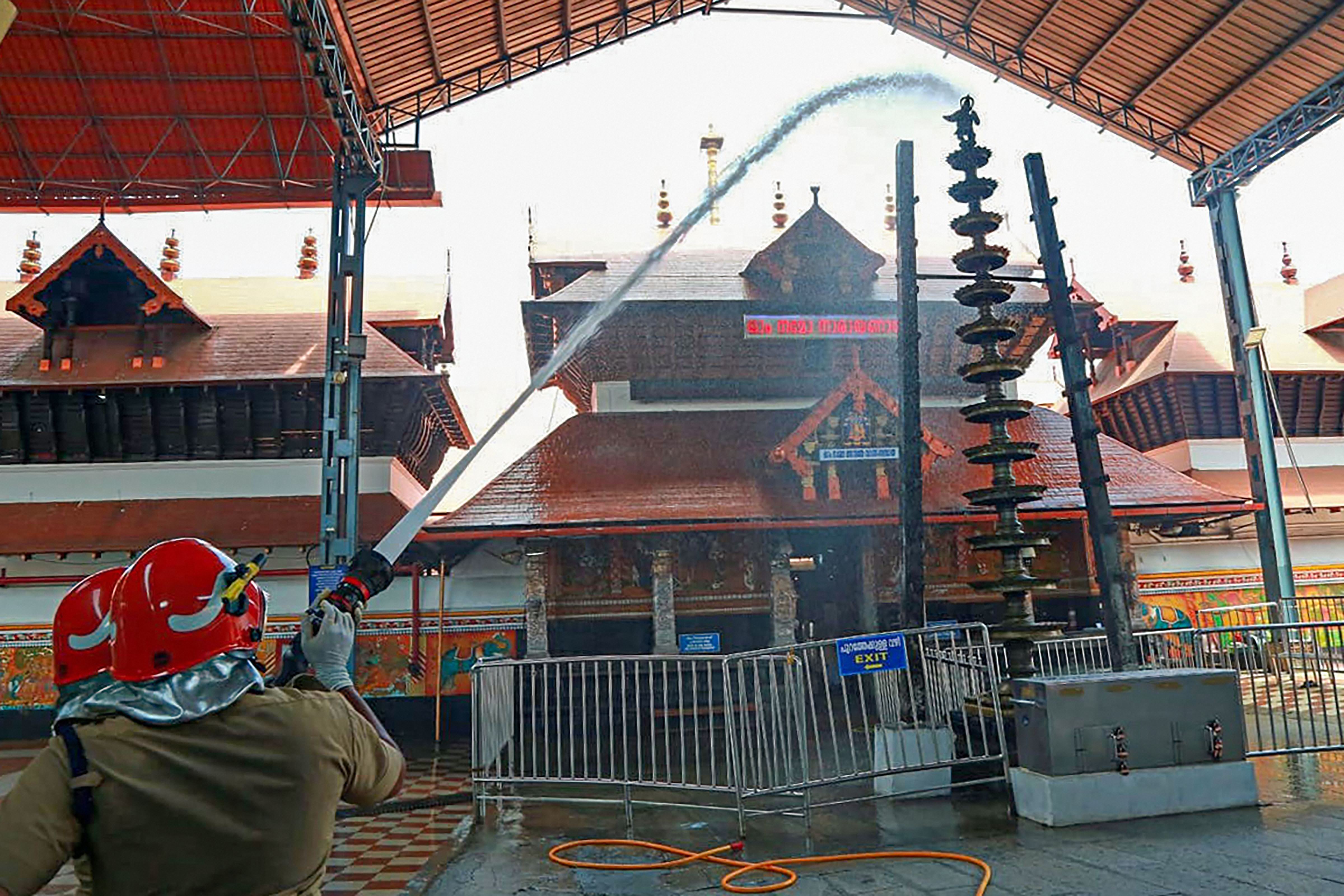 The BJP, which has backed the reopening of temples in states ruled by it, has taken a last-minute contrary stand in Left-governed Kerala by opposing the state government’s decision to allow these places of worship to allow visitors again in keeping with central guidelines.

The Congress in the southern state has been vociferous in its demand to reopen places of worship closed due to the pandemic-triggered lockdown.

While both the BJP and the Congress have been baying for the blood of chief minister Pinarayi Vijayan and his Left government by literally picking up an issue a day, the BJP has accused the state of reopening temples eyeing the money collected in the drop boxes.

The majority of the temples in Kerala are governed by the Devaswom boards of Travancore, Cochin and Malabar, all of which come under the state government.

The BJP took the unexpected position at the eleventh hour on Monday, with less than 24 hours to go for the reopening of temples and other places of worship. Its leaders had remained silent when the Centre issued the first order on May 30 about the reopening of places of worship, when the related guidelines were issued on June 4, and after the Kerala government held separate online meetings with religious leaders last week.

Many believe that the BJP has taken such a stand, which does not jive with its ideological position, as it had not expected the communist government in Kerala to reopen places of worship amid the pandemic. Taken aback by the decision, the BJP could be looking to spin a controversy related to religion, like it had done during the Sabarimala fiasco in 2018, in a state where elections are due next year.

The BJP’s attack was led by Union minister of state for external affairs V. Muraleedharan, a Malayali who had been sent to the Rajya Sabha from Maharashtra.

Literally opposing his own government’s order to reopen temples, he said in an open letter to chief minister Vijayan that the Union minister posted on his Facebook page: “On whose instructions did your government decide to open the temples under the Devaswom board? Did believers ask for this? Did any temple governing body ask for it?”

While the state government had invited temple governing bodies, heads of temples and religious scholars and priests to the meeting to discuss the reopening, it had left out the RSS outfits that control some temples.

“The state government is trying to hurt the Hindu community. Hundreds of temples that do not come under the purview of the Devaswom board decided to continue to stay closed considering the situation in the state. But you (government) are going ahead not because of concern for the believers, but the collection boxes,” Muraleedharan wrote.

“A central minister should not talk like a third-rate politician. He has taken oath under the Constitution. So he should not sow the seeds of hatred,” Surendran told a media conference on Tuesday.

“A central minister is openly challenging the Centre’s own decision,” Surendran added. “They perhaps thought the state government won’t open temples because we are atheists, and they would get another ‘golden opportunity’ ahead of the state polls next year,” Surendran said, alluding to an infamous remark made by then state BJP chief P.S. Sreedharan Pillai in 2018.

At the peak of the 2018 agitation against the state government’s decision to abide by the Supreme Court order that allowed women of all ages to enter the Sabarimala temple, Pillai was caught in a video telling party workers that it was a “golden opportunity” that the party ought to leverage for political gains.

The BJP, however, failed to extract any political capital from the issue as it drew a blank in Kerala despite its overall overwhelming majority in the 2019 Lok Sabha elections.

Former president of the Travancore Devaswom Board, A. Padmakumar, who steered the body during the Sabarimala agitation, rubbished the BJP’s claim that the government was eyeing the temples’ money. “No government can touch a paisa from the temple funds. The BJP is spreading lies,” Padmakumar told The Telegraph.

“The LDF has not only helped the temples, for the first time this government has made a budgetary allocation of Rs 100 crore towards expenses of the temples,” he said.

In the 2019 state budget, the Left government had allocated another Rs 739 crore for development work at Sabarimala temple.According to Padmakumar, 1,252 temples function under the Travancore Devaswom Board while hundreds of others are run by families or trusts.

“There are approximately 25,000 Hindu temples in Kerala, many of them run by families or trusts,” he added.

At the news conference on Tuesday, Surendran said the state government was not forcing anyone to open temples. “We welcome the decision of some who decided to keep their places of worship closed (despite the relaxations),” the minister said, citing temples, mosques and churches.

He pointed out how BJP-ruled Karnataka and Uttar Pradesh were busy opening temples. “So they basically want to create an issue by misguiding the people here,” Surendran said.

Kerala BJP president K. Surendran countered his namesake and accused the state government of acting against the interests of Hindus.

A.A. Rahim, state secretary of the Democratic Youth Federation of India (the CPM’s youth wing), countered: “Why are they asking the state government about a decision taken by the Centre? I am sure people are watching this double standard,” he said, alluding to BJP-ruled states reopening temples.