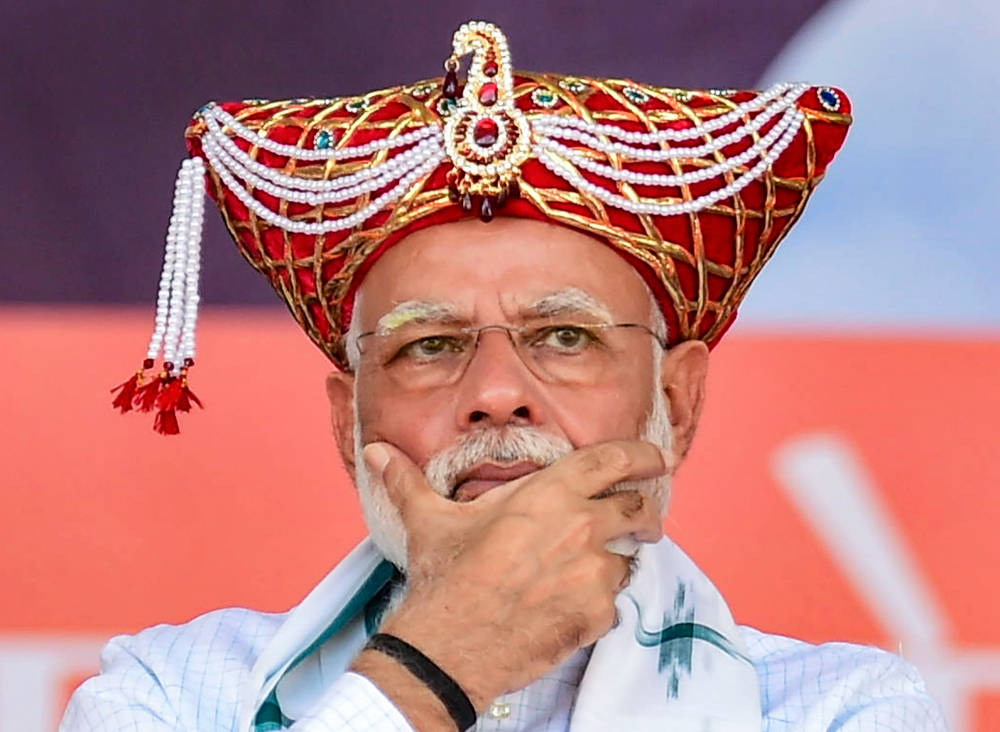 “COVID-19 does not see race, religion, colour, caste, creed, language or borders before striking. Our response and conduct thereafter should attach primacy to unity and brotherhood. We are in this together,” the Prime Minister said in a tweet posted from his official Twitter handle.
(PTI)
Our Special Correspondent   |   New Delhi   |   Published 19.04.20, 09:27 PM

Prime Minister Narendra Modi on Sunday broke his silence on the three-week-long sustained campaign by the Right-wing ecosystem and friendly media houses to link the Covid-19 pandemic with a particular community, saying the virus “does not see” racial, religious or other differences before striking.

The intervention led to questions on why he had not stepped in earlier given how his word is treated like a command by the “majority” that put him in office.

“COVID-19 does not see race, religion, colour, caste, creed, language or borders before striking. Our response and conduct thereafter should attach primacy to unity and brotherhood. We are in this together,” the Prime Minister said in a tweet posted from his official Twitter handle.

Modi’s intervention — however belated — is a clear indication that the government is apprehensive of a possible rekindling of the post-Citizenship Amendment Act narrative that had gained currency overseas of India moving away from its foundational Gandhian ethos.

Organisation of Islamic Cooperation condemned the “unrelenting vicious Islamophobic campaign in India maligning Muslims for spread of COVID-19 as well as their negative profiling in media subjecting them to discrimination and violence with impunity”.

Further, it urged “the Indian government to take urgent steps to stop the growing tide of Islamophobia in India and protect the rights of its persecuted Muslim minority as per its obligations under international human rights law”.

The Prime Minister’s intervention is also an acknowledgement of the ineffectiveness of the general advisory against stigmatising Covid-positive patients and their families — issued by the health ministry on April 8.

That was over a week after the communalising of the pandemic had begun in the wake of a religious congregation in Delhi amid allegations that the Tablighi Jamat meet had become a source of a number of Covid-19-positive cases across India.

The Centre had followed this up with a note to all state governments, expressing serious concern over “polarising public opinion on religious lines”. But the Right-wing ecosystem had continued with its efforts to communalise the pandemic and create a divisive narrative with the help of WhatsApp videos that have been declared fake by the police even in BJP-ruled states.

The Prime Minister’s intervention came at the end of a weekend that saw award-winning wrestler and BJP member Babita Phogat accuse “jaahil jamaati” (illiterate Jamaati) of spreading the coronavirus in India, triggering a war of words across social media platforms.

After Modi had tweeted, many drew her attention to the tweet.

Phogat retweeted some lockdown-related posts by Modi on his personal handle but ignored the one against linking the virus to any race or religion.

The communalisation of the pandemic in India has caught international media attention despite its preoccupation with the virus. It has also resulted in adding to the anti-minority sentiments, further contributing to the apprehensions of the beleaguered community.

The latest example of such anti-minority sentiment came from a Meerut-based cancer hospital. It demanded corona-negative certificates from Muslim patients.